The choice of which rear suspension to get was relatively easy as one of the main targets of this project was to improve the handling of the car - along with better brakes, better steering and a BIGGER engine. I knew I wanted to lower and stiffen the rear suspension, and, after consulting several of the guys in BAMA, and doing my own research, I decided to replace the stock 4-leaf standard eye suspension with a set of 4.5-leaf mid eye springs. This should lower the car about an inch from the stock height. I'll be lowering the front by at least the same amount in due course.

First up was a refurb of the axle mounting plates. I could have bought replacements, but my approach on this project has been to reuse as many of the original parts as possible. Bearing in mind the rusted up condition of the plates, and how much of them will be seen when the rear suspension is assembled, I decided this would be another opportunity to use the POR-15 I talked about here.


The first step was to give the mounting plates a good going over with Metal Ready, which I plastered on with an old paint brush, and then neutralized/rinsed off with cold water. I then dried the plates first with compressed air and then with a heat gun to make sure they were really dry. I actually carried out this process twice because there didn't seem to be much difference in the color of the metal after the first application. Second time around there was a noticeably grayer/bluer hue as shown below.


With the plates very, very dry it was straightforward to apply the POR-15 with a small foam brush as I did before... 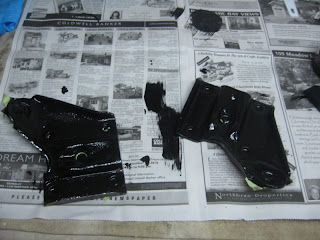 ...and then hang the parts up to dry. I waited about three hours until the first coat was touch dry and then applied a second coat, which I left to cure. 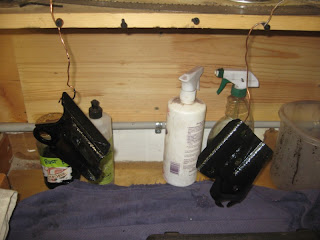 After several days the surface was hard with a glossy texture that was a perfect match for the rear end housing and brake backing plates I painted previously. 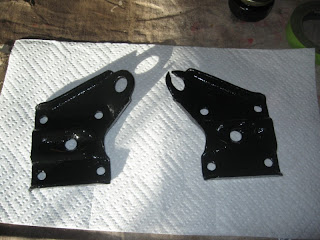 So, now it was time to purchase the chosen rear suspension...but where to buy it from? If you read my rant about Mustangs Plus from a couple of months ago, then you're probably expecting me to have placed my order somewhere else - and I did really try to do that. But then I started looking at prices and the cost of shipping. Let's face it, a pair of leaf springs weighs a lot, and shipping across the country is not cheap. Ultimately I decided to give MP another try, and here's why:
The only negative to all this was finding the time to make the trip out to Stockton. I struggled to find an opportunity for a couple of weeks, but then my birthday ticked round and I gave myself the morning off from real life to make the journey. As it turned out it was a beautiful day for a drive.


Attaching the suspension was really just the reverse of taking the old one off. I started by bolting the front spring eyes onto the brackets in front of the wheel wells. I tightened the locking nuts to a moderate level but didn't crank them down all the way just yet. 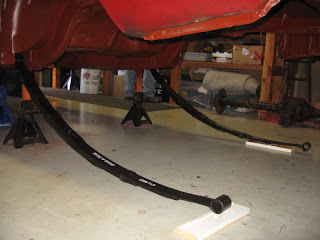 The new mid-eye suspension looked really sleek next to the rusty old stock springs which are still cluttering up my garage. What does one do with a pair of unwanted leaf springs? It's not like I can sell them!


I positioned the mounting plates, U-bolts and the correct size socket ready for attachment to the rear axle.


Then I moved the axle behind the car and rested it on a pair of jack stands. I used a tape measure to line the springs up as close to the perfect position as I could. I then raised the axle on the floor jack and moved it forward until the axle was directly above the spring attachment points. This was tricky to do because I was supporting the axle under the differential...and that's not exactly in the middle. It was very useful to have my Dad around to provide an extra pair of hands, although I'm quietly confident I could have managed the operation on my own. 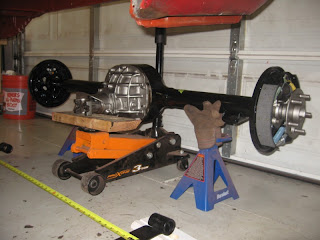 With the axle in prime position I raised the driver side spring and supported it on a step stool. I then fitted the U-bolts over the axle, slotted on the mounting plate and tightened the nuts until the thread at the end of the U-bolts was just through the nuts. 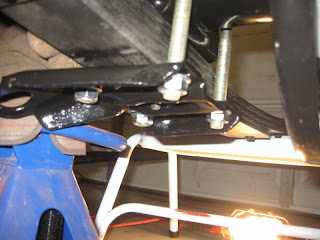 After moving to the passenger side and repeating the procedure, I lifted the axle a few more inches with the floor jack and bolted on the shackles. I forgot to photograph the standard rubber bushings which were supplied with the spring mounting kit. I did consider upgrading to polyurethane bushings, but in the end I decided I didn't want the suspension to be that stiff. I also fitted a new pair of gas shock absorbers - this was where an extra pair of hands was particularly useful. 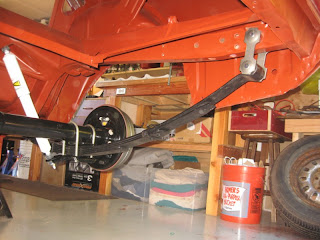 Sliding on the brake drums was not exactly straightforward - quite a bit of adjustment of the shoes was required before the drums would fit. At some point in the future I will be getting an expert to check over my work - probably after I have reinstalled the master cylinder and the brake lines....you can't be too careful when it comes to the brakes.


Here's a close up view of my new suspension and refurbished axle. After I took this picture I added the second quart of gear oil to the differential...via the breather tube bolt hole. Not exactly an orthodox procedure, but it did the trick.


This picture is taken from further away. The main purpose of including it is for comparison with the picture below...


...which was taken before I removed the stock rear end. This seems a very long time ago now.


I'm very grateful to Terry D. from BAMA for donating a set of 5-lug rims and tires to my project. Long term I have my eye on a set of Magnum 500's (yes, I know they weren't available on the Mustang until the '69 model year, but I really like them), but these wheels are perfect for now. Wheels and tires will probably be one of the last things I buy for the car. When I first picked up these wheels they had been stored outside for a while and were covered in rust on the inside surface of the rims. After several months storage in my garage I'm please to say that the rust was...well...still there. Fortunately my Dad stepped up to the plate and broke out the wire wheel and the drill and gave the rust a good going over. After he finished the first two wheels I mounted them on the axles, raised the rear of the car another inch on the floor jack and...for the first time since the summer...removed the jack stands. After I let the car back down there was just enough space for me to wriggle underneath and torque down the axle U-bolts and shackles until the suspension was completely secure. 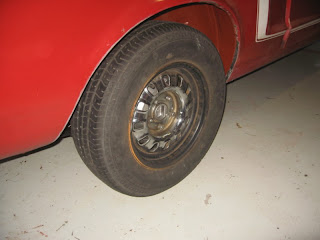 I'm not sure if it's just because the suspension is lower than it used to be, or if it's because the rear of the car has been up in the air so long, but the back looks incredibly LOW. It's not really evident in the picture below, but the '68 actually looks like a drag car with the front noticeably higher than the rear.

Interestingly, I started working on the car properly almost exactly a year ago, although I had owned it for about fifteen months before that. I'm really pleased with my first year's work, and if I do as well in the next twelve months I'll be delighted. The next time I'm in the garage I'll be moving on to the passenger compartment, but for now I'm taking some time out to admire my progress.