I'm reasonably happy with the rate of progress tearing down the car. The interior is almost completely gone with only the steering column, clutch and brake pedals and the park brake assembly left to remove. My original target was to have the tear down completed before the INDY 500, but in the event I didn't quite manage it. I started taking out the park brake handle and linkage before the trip, but only managed to complete it after I got back. 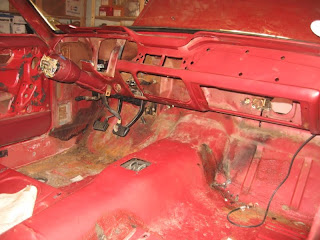 The bracket which holds the park brake handle to the firewall is located just behind the steering box - this bracket also holds one end of the clutch equalizer spring in place, so it makes sense to remove the spring before unbolting the bracket. 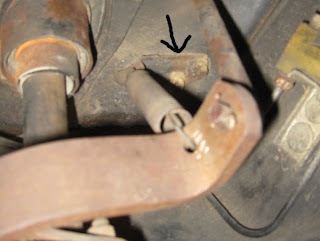 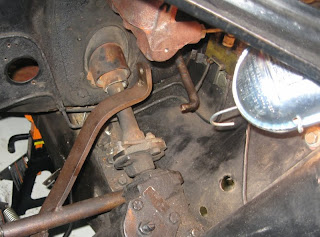 Removing the park brake cable from under the car is a simple matter of disconnecting the cable and removing the hardware. 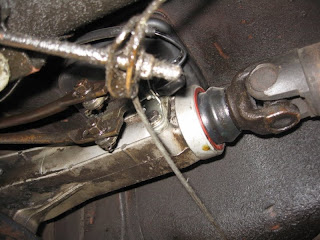 The entire underside of the car is covered in a gunky mixture of oil and dirt - the legacy of several moths of operation with a leaking oil pan gasket. Cleaning all this muck off the car is going to be a real chore....oh well... 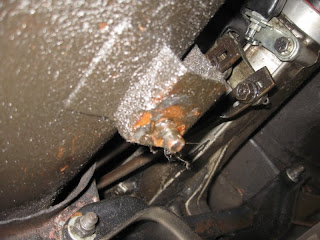 The linkage is held to the under-body in several places - once the clips are off, the connectors twist out. Only one connector was really tough to remove, but I eventually forced it off the frame. 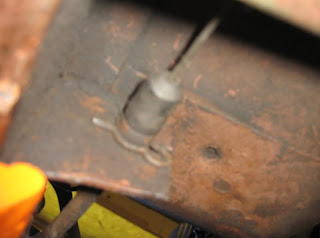 While working under the rear of the car I noticed the drivers side frame rail has a huge "rip". It's hard to imagine why someone would do this - seems like a very radical way to "inspect" the inside area....even more difficult to imagine how it could happen by accident. Weird. I guess I'll have to try and close this up later. 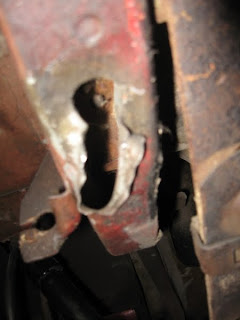 I wasn't really intending to remove the rear brakes yet - at some stage I will be replacing the rear axle - but I found the drums and shoes had to come out before I could get at the park brake linkage connection. 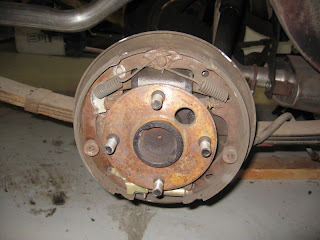 The ford manual I have been working from recommends a special tool for clamping the brake cylinder before removing the springs, but I found that yanking the springs off with a pair of snipe nosed pliers worker just as well. 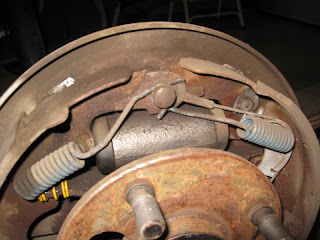 After that the shoe retaining springs are easy to remove and then the parking brake link bar and spring can be lifted out. 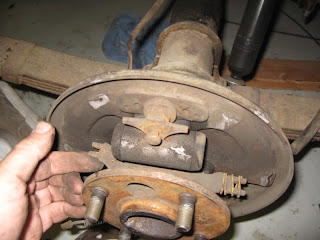 The park brake linkage connection was really tough to get off. After twisting the fitting back and forth and poking at it with a small screwdriver I finally managed to get it through the hole in the backing plate. The other side was just as much trouble to get out too. 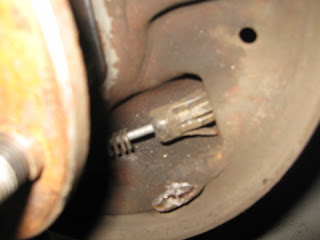 Finally I have the both rear brakes and the park brake off the car. There really isn't much more to remove before I can start on the bodywork 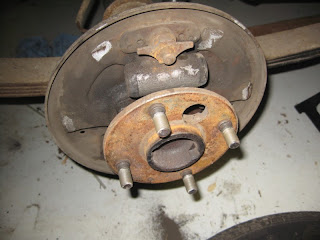