The story left off at the end of day #2, with the mustang having made it through the first 251 miles of the homeward journey without a serious problem...apart from a very tired driver. 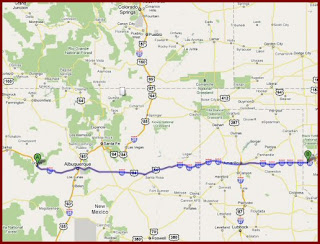 Next morning, I was on the road just after 6:00 am. It would have been sooner, but I was waiting for the free breakfast in the motel (once a cheapskate, always a cheapskate...). It was actually a great time of day to be on the road. The sun was coming up through the mist, and in minutes I was passing the border town of Texola. 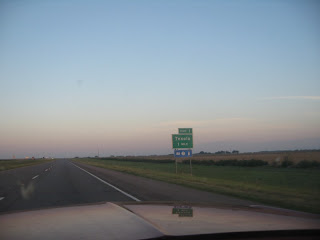 A few hundred yards further and I was into Texas. I planned to stop for gas and a big breakfast in Armarillo, which I got to about 9:30 and ended up in a very busy Denny's (it was Saturday morning). 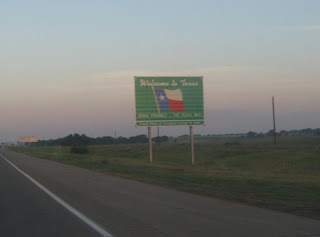 The next photo is still one of my favorite pictures I took during the trip - a perfect view of the sky above a red steering wheel - what could be better? 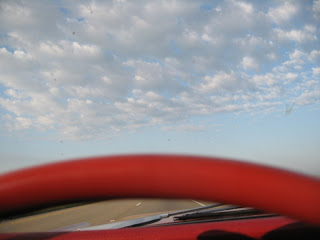 Passing through Albuquerque was a big mile stone on my trip. It was mid-afternoon and I was making excellent progress...until I noticed that the temperature gauge was climbing very high. I tried running the car at 80 mph to see if this would cool things down, but it didn't make much difference, so pulled into a rest area and checked the oil...oh dear...not only was the oil level dangerously low, but the dipstick was really, really hot and I noticed I had a fairly major oil leak. There was oil all over the motor and the underside of the hood, and there was a steady drip onto the pavement down below - it later transpired that the oil pan and valve cover gaskets were shot, but I didn't know that then. Not sure what to do, I eventually decided to limp on to the next gas station where I could top up the oil - it needed several quarts to get up to the high line on the dipstick. 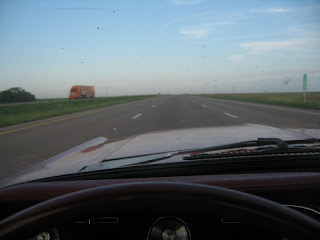 The new oil certainly helped cool down the engine, but by now I was starting to feel driving fatigue again; Driving any vehicle for ten hours straight is tiring, but the Mustang was really tough to handle - the steering was really loose, so I was constantly fighting to keep the car moving in a straight line, and the stock seat was killing my back. I was also starting to feel the pain of sunburn on my left side (arm, neck, etc), so I started to think about finding a motel. The next major city on the road was Grants, NM, so I did myself a favor and checked in to the Comfort Inn for some much needed recuperation. Giving the car a good few hours to properly cool down seemed very sensible at this point too. 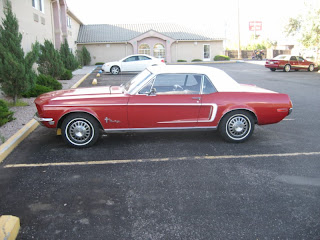 Read part three of the story here.
Posted by Papa Sheep at 2:18 PM