why I don't use Mustangs Plus

So right from the get-go I need to say this: it's true that we are spoiled with the number of Mustang correct parts vendors and the combined selection on offer. I mean, with the Dynacorn body shells now on the market, it's possible to build an entire car from reproduction parts....if anyone were so inclined. The thing is, with all this choice, the decision about where to place your parts order has become complicated...until, that is, you need some customer service.

The fact is, if you're restoring a car, you're going to spend a lot of time figuring out which replacement parts to buy and a fair chunk of change acquiring them. You're going to make some mistakes, and you're going to have to send some stuff back from time to time. If you ordered the wrong thing, then it's reasonable to expect to pay return shipping charges and maybe a restocking fee. Also, it's understandable that you will occasionally be sent the wrong part by the supplier: in big warehouses things get mixed up, it happens. And when it happens, you'll find out how good the vendor is at customer service (or whether they even care about it at all). It's an unfortunate fact that after-sales service across most industries is generally awful. Occasionally it can be so shabby that you'll vow to never use the company concerned again. That's pretty much what happened to me with Mustangs Plus.

First of all, Mustangs Plus (MP) is not exactly local to me, but I can drive there if I have to, I mean I do go to their car shows from time to time. Like this one. Also, through my membership of BAMA, I'm well aware of the support the club has received from Ron Bramlett over the years, and, even though I've never been introduced to Ron, I feel a sense of duty to MP as I do to the other businesses which support BAMA. Or I did. Here's the story of how it evaporated:

Way back when I was "chasing ugly" on my car, I was getting together a few new shinny bits and pieces for an upcoming show: shifter boot, oil breather cap, hood trim, that kind of thing, probably 200 dollars worth of stuff. So I browsed through the MP website, and placed the order, and waited. My package took just over a week to show up...a bit longer than I thought it would take from Stockton, but whatever.

After checking through the nice shinny new parts, I discovered they sent me the wrong quarter panel end cap seals; I ordered 67-68 but got 65-66. If you're not familiar, this part is just a small piece of rubber that fits behind the end caps, and costs like two dollars. Anyway, I'm a busy guy, so I sent an email. Nothing happened for a few days, then I got the following SEVEN WORD reply:

Er, yeah, I know. That's why I ordered 67-68. I sent another email. A few more days passed. Then another reply appeared in my inbox. A few more words this time, but still the wrong ones:


"You did the order on line and that is the part number you put on thar [sic] you can send it back for the 67-68 ones you have to pay the shipping both ways."

Apart from that not being true (I ordered 67-68 as it said on my original order paperwork), I had to wonder who let this imbecile near a computer keyboard? Feeling pretty fed up by this point, I realized I was going to have to call. I spoke to a young sounding chap called "Greg" who turned out to be the author of the emails. I was impressed he could actually speak. Anyway, he said, rather aggressively I thought, that the part # on their website corresponded to the 65-66 version even though the description said 67-68. So it was in fact their error....but I still had to return the incorrect part for an exchange, and that I had to pay shipping both ways, as that was their policy!!

Er, hello!! This is not right, because:

1. It was their error - I ordered the part I wanted and they sent me something else.

2. The part is worth two dollars - more than the cost of mailing it back. If they needed it back that badly, they could pay the shipping.

3. This was my first time ordering from MP, and I felt I deserved better treatment - I did nothing wrong after all.

I pointed out these facts, but Greg stuck resolutely to his stance. I said he should mail me the correct part at his own cost, but Greg was not going to bend on this, so I suggested he connect me to his manager. Greg said his manager was too busy to talk to me, but that I could hold while Greg spoke with the manager himself. I'm guessing this was BS, but I held anyway. Eventually Greg came back on the line and said, yeah, they'd mail me the right part. He did not apologize, and he did not acknowledge how much time I had spent screwing around with this. I asked him why I should ever use Mustangs Plus again? That was the last thing I did ask, as his response was to hang up on me. I was left feeling seriously annoyed. But I didn't do anything about it. I didn't write a bad review, I didn't moan to the other guys in BAMA...I just took my business elsewhere.... 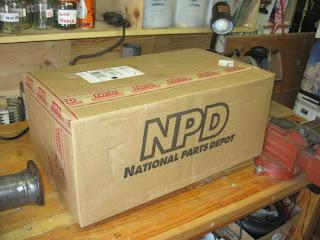 Fast forward to a couple of months ago when I started looking for a new suspension. A lot of guys rave about Mustangs Plus and the grab-a-trak products, so I decided to give them another try. Or I was going to, until a friend told me the tale of his grab-a-trak suspension:

Put simply, he ordered a rear suspension from Mustangs Plus.They sent the wrong one. And then they wouldn't do anything until he returned it...so my buddy, not wanting to waste more $$$ on shipping, gave up his day off and drove on out to Stockton to exchange the suspension...but oh dear, MP didn't have the correct one in stock. Then, a week or so later he receives a voicemail telling him the correct parts are in stock, and to come pick them up. At this point my friend is like, what, I PAID FOR SHIPPING...how about you ship to me, huh?

I don't actually know how this was resolved, and I don't really care, as it isn't the resolution that matters; for me it's more about the general experience of doing business with a company. Or to put that another way, how much hassle is it to just get the item I ordered (and paid for!!) in a timely manner and with the minimum of fuss. So, right now I am looking for somewhere else to buy a rear suspension - any suggestions?