putting on some weight

So before I could go any further with installing the front end, I needed to put some more weight on the car. The doors had to go back on at some point so it made sense to start there. But just at the last minute I remembered that it was much easier to get the seats in and out when the doors were off, so I put the interior and the steering column back in first.


So now back to the doors. I did a full refurbishment of the doors a while back - in my previous garage in fact, here and here. But that's not all. Back when I shot base coat/clear coat on the trunk and gas tank with their final red, I also painted the door edges (more on this later).


I would have liked to have taken the time to reinstall all the side glass, but by this stage I was in too much of a hurry to get packed and move, so I bolted on the doors with the minimum amount of fuss.


Next up: the trunk lid, starting with my zinc plated hinges.


I described the dangerous procedure for installing the hinge springs here, and I don't have much to add...except that this time I broke my homemade tool. This set me back an hour while I made a stronger replacement out of quarter inch thick angle.


I used my usual in-through-the-gas-tank-opening approach to align the trunk lid and then dropped in the finished gas tank. Then it was back to packing up more stuff in time for moving. 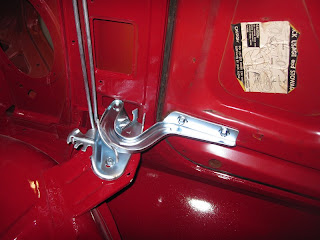 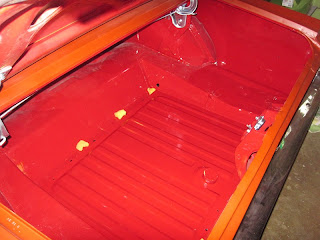 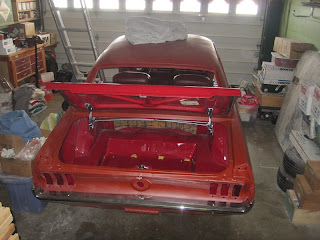 So if you've been paying close attention over the last few months you'll know that I completed a bunch of bodywork and painting, followed by more parts cleaning and more painting. Maybe you're wondering where next? It just so happens that the answer to that question is quite literally somewhere different next. Or to be more specific, it's time to move house again and so, for the second time during this project. it's time to hastily reassemble the car and roll it onto the back of a truck.

I already lowered the rear of the car about an inch by replacing the stock setup with a a pair of 4.5 leaf mid-eye Grabtrak springs from Mustangs Plus. At the same time I threw away the weany stock rear axle and replaced it with a eight inch unit from a '68 Cougar....all of which I've been storing in the shed/paint booth for most of the last year. It was nice to break them out, and I've done this particular install on my own a bunch of times now.


Now comes the interesting bit - the front suspension. As stated a squillion times, I'm lowering the car about an inch at the front too - commonly called the Shelby drop. At the same time I upgraded the spring perches to the Opentracker roller design. The next few pictures should be interpreted as a blatant plug for Opentracker because they are great. And they gave me a really cool t-shirt!

The first step is to drill two extra holes in the shock towers - this facilitates relocation of the upper control arms and inch (or more) below the factory position. You can measure the placement, but I used the Opentracker template to make sure I got the placement perfect. I did this back before I painted the engine compartment. 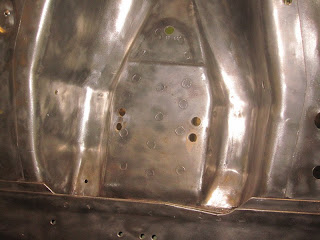 The control arms were in good shape when I bought the 68 so I was always going to reuse them, but I wanted the look to match the rest of the engine compartment. I seemed a little bit wrong to scuff up the powder coat and paint over it with the same duplicolor black I used everywhere else, but I was happy with the result. 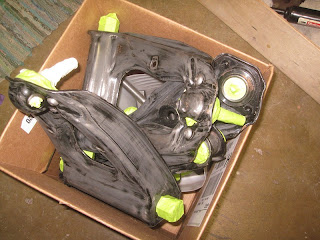 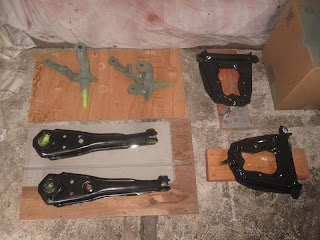 The spring covers were also painted black after I sandblasted and painted with the same epoxy primer I used on the body. 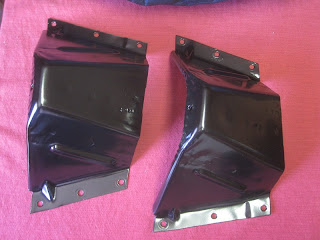 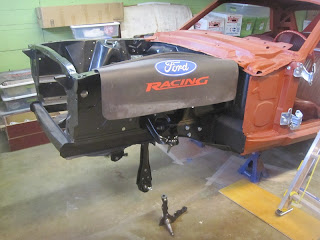 Installed my new Opentracker lowering springs and polyurethane bushings and bolted up the refurbished V8 spindles (more on these later) and....that was as far as I could get on my own. 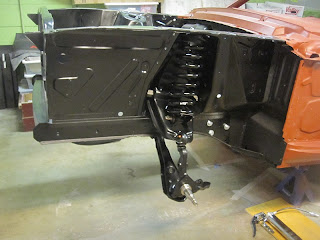