I've been slowly limping towards rebuilding my 351W, narrowing down the spec. and buying parts. One of the things I always intended to buy off the shelf was a nice shinny pair of valve covers. The ones that came with my engine were not in the best shape...and it's the one thing that everybody looks at! But I just could not find anything suitable. The nearest thing was a pair of stock reproductions that I could customize, but why go to that much effort on a repro part? So I went back to the original parts and dug out my trusty wire wheel. I knocked out a few small dings and then I sprayed on several coats of the same red paint I used on the rest of the motor. 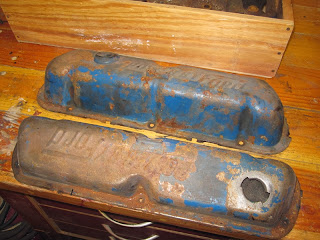 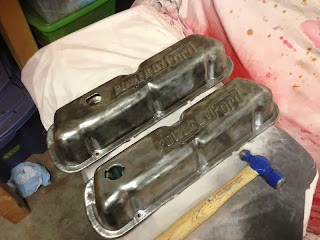 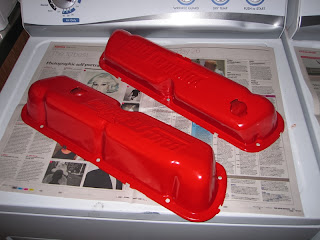 Now this is where it gets interesting. I wanted to paint the raised text a different color. I don't have the steadiest hand, so using a stencil was mandatory. I tried a couple of ways of doing this, starting with a crude attempt to make a template using a wax crayon and some of the "Sticky Mickey's Automotive Masking Film" I bought from Eastwood. It was not very successful. Next I tried some 1/16 inch wide masking tape to trace out the individual letters. This is a very time consuming process if you want to get it spot on. I bought some good quality tape which was easy to stretch and bend for the curved sections, but also easy to keep straight. And it was easy to cut with a semi-sharp razor blade too. The most difficult bits were the insides of the closed letters (o, d, p etc). I cut some of these from Mickey's not-all-that-sticky wide tape. When I was happy with the outline I added more tape and masked off everything else. Then I had to do it all again for the second cover. 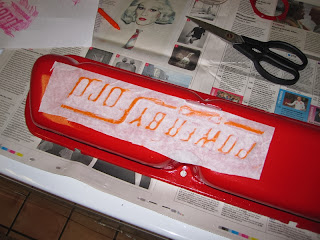 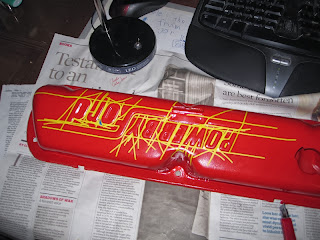 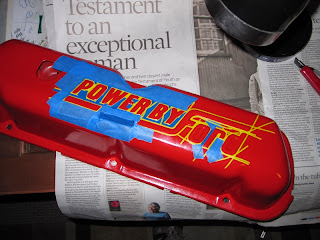 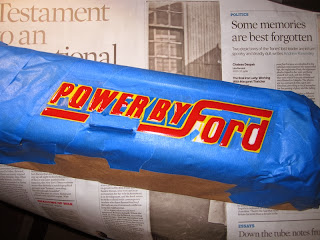 It took a few seconds to spray on half a dozen coats of the Eastwood brake gray I've been using throughout the project. When the tape came off I feathered the edge of the gray with some 0000 steel wood and then I sprayed on several coats of clear coat. Two more parts completed! 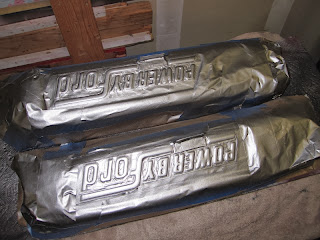 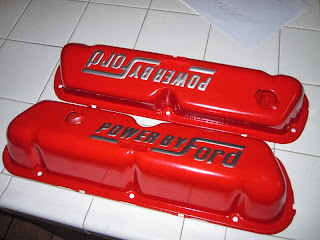 There's been a few intake manifolds linked with this project over the years. There was the unit that came with the six cylinder engine for a start. I don't even have a picture of that one. There was the stock manifold from the 302. That one came wrapped in clingfilm....and that is how I last saw it too. I never unwrapped it because I acquired an Edelbrock performer 289 aluminum manifold (with free duct tape) on the same day as the 302 motor. After I decided not to use the 302 for this project I passed it on to my friend Larry, and the aluminum manifold went too. All of this left me with a stock manifold for the 351W, which I didn't really want to use, so I started casting around for alternatives. 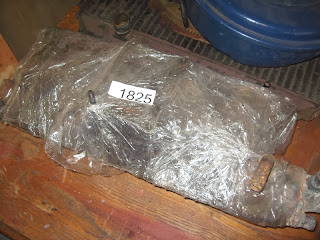 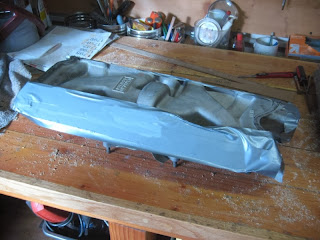 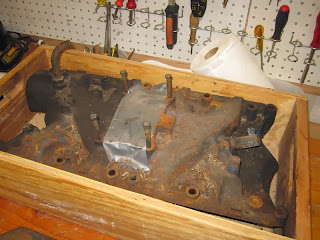 After mentioning my needs to several of my buddies in BAMA I ended up with this 4-barrel Edelbrock Performer 2181 from my friend Brian. Apparently the "dual-plane design and 180 degree firing order...boosts torque over a wide rpm range, from idle to 5,500 rpm. These manifolds also deliver improved throttle response over stock intakes." I wasn't as keen on the green paint however. 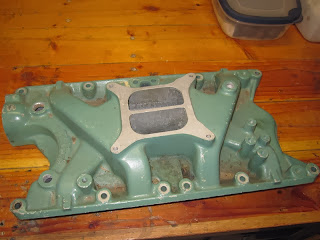 There were several options for getting rid of the ghastly green:

1. Paint over it....too many chips, bumps and peeling paint.
2. Wire wheel...not a smart idea with aluminum and too many hard-to-reach places in any case.
3. Paint stripper....messy and time consuming given the multitude of contours.

So I took option 4, and handed it over to my buddy Chuck. He took the manifold to his place of employment and ran it through their industrial-sized sand blasting cabinet. (After work, of course!) When it came back the manifold had also been treated to several layers of clear coat and had all the bores re-tapped. So better than new in other words. Not bad for just a case of PBR!