So a few weeks ago I discovered the body rot in the passenger side fender apron, and since then I've been pondering what to do about it, the options being:

1. roughly weld a piece of metal over the holes.
2. patch the panel using part of a replacement apron.
3. drill/cut out the entire panel and replace it.

Well, option one is tempting in a way because it would be quick and nobody's ever going to see it anyway, but I'm trying to do a good job with this project...and the disadvantage of option three is that I'll lose the VIN number - unless I graft it into the new panel - so I thought I'd have a go at option two. I started by cutting out a large chunk of the metal around the damaged areas - I made the cuts in areas where the panel was roughly flat to make the welding easier. The replacement panel I got was, just by chance, sold by Dynacorn - and it was a very good fit. Apart from trimming up to fit the opening, I barely had to finish the patch at all. 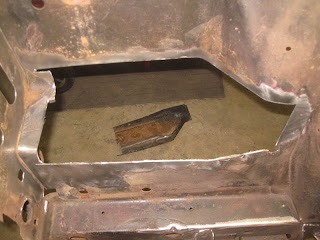 This is where things started to go wrong. I tried lots of different settings on my welder, and I tried a huge piece of copper as a heat sink, but whatever I tried, it all ended in holes: lots of holes burned through the metal. My progress as a welder has been helped along A LOT by a lesson from my friend Abe, but I still have a long way to go. I actually finished up welding in the entire patch, just for practice, but before I was even halfway done, I knew I'd be cutting it out again. 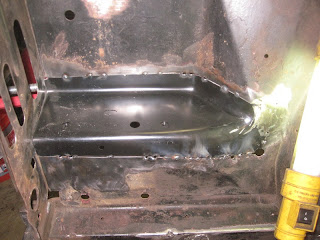 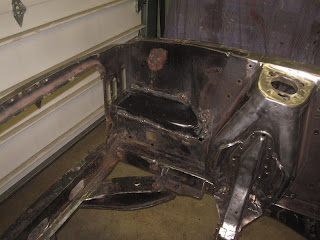 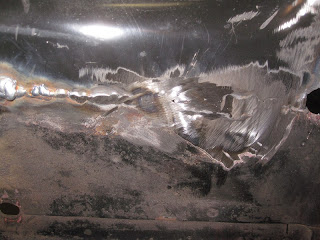 So I a few days later, and I went over to RPS to pick up another fender apron...only they were unfortunately out of stock...this was a pain because I wanted the new apron in time for the weekend, but there are other parts stores close by so I tried calling a couple...eventually I called up Mostly Mustangs in Oakland - their main business is repairs and modifications so they don't really sell parts, but they did have the right apron on hand and I made a deal which included the owner letting my into the shop after hours. So I had my new panel before the weekend....but hold on, not so fast. I didn't really look at the panel when I picked it up - I was too busy trying to keep my son away from the M&M's dispenser in the Mostly Mustangs office - but when I examined it the next day I realized it wasn't a Dynacorn panel (if I'm honest, the "Scott Drake" sticker was a bit of a giveaway). Still unconcerned, I cut out the old panel and my awful patch, and then tried the new panel for fit...and man, it was soooo bad. I couldn't bring myself to even measure how far away it was. Instead I called up RPS, ordered another Dynacorn panel, and went to work on a different part of the car...a week or so later and work continued. 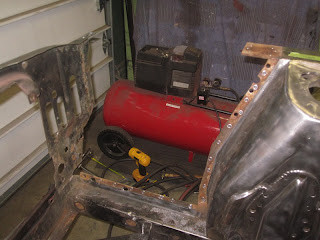 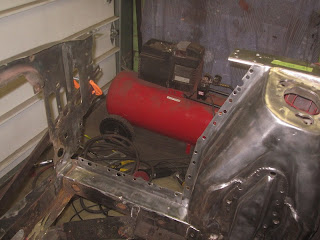 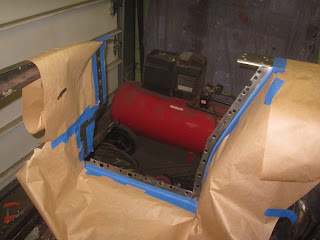 This project was never intended to be focused on either performance upgrades or modifications, but as time has gone on more and more of these issues have crept into the picture. The engine compartment is a prime example. The original idea was for a simple clean up and repaint....but then I somehow found myself contemplating welding up the shock towers....

Ford's design is such that the shock towers are spot welded to the engine mounts, and that is...well...that's it. The theory is that by welding up the gaps at the edges will increase strength in this area and reduce body flex under cornering and/or hard acceleration. It also looks incredibly cool...provided you're not going for a concourse restoration. 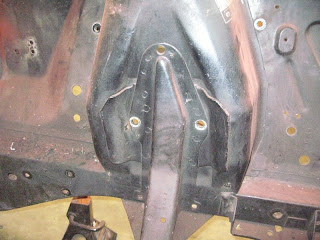 Some of the gaps were almost an eighth of an inch wide. I tried closing them up by applying the force of my BFH, but I just couldn't bring myself to hit the car as hard as I needed to in order to affect significant change. So, where necessary, I forced a welding rod into the gap before I got cracking with the MIG. 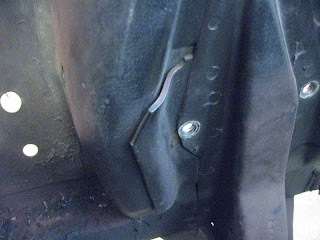 I'm not a very experienced at welding, but as my buddy Mark is fond of saying, "you don't have to be good at welding, you just  have to be good at grinding."  I got a fair bit of grinding practice when  I lowered the seat platforms in the car. One of the issues that rapidly became apparent is the need for a variety of disc options - grinding disc, sanding disc, wire wheel, etc - and hence the amount of time spend switching out the various discs. A nice solution to this problem is to invest in a couple of dirt cheap Harbor Freight angle grinders, so that a selection of media is always available. I still use my beloved DeWalt, for the serious stuff, but the other tools save me a lot of down time. 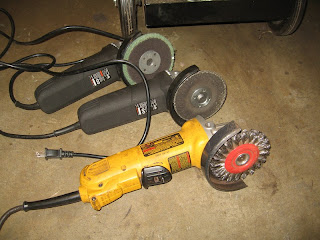 The cars at Hot August Nights in Reno included a 1970 LS6 the legendary King of the muscle cars and the only original Superbird I've ever seen! 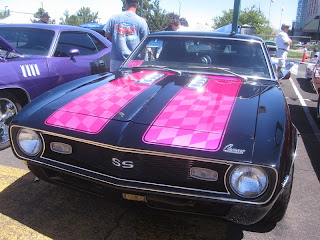 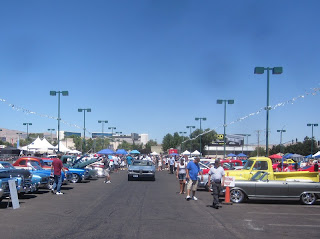 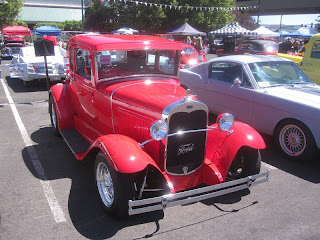 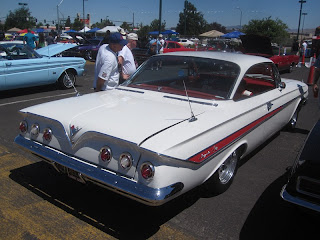 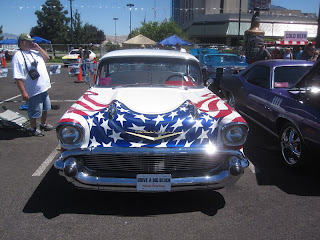 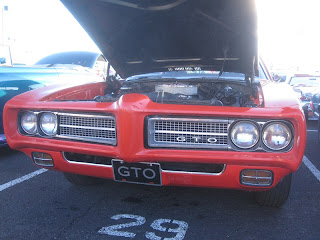 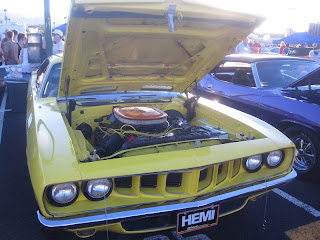 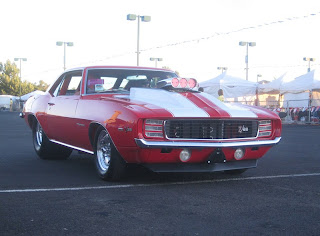 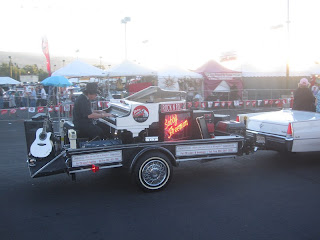 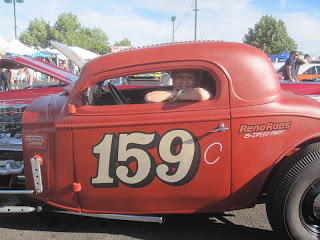 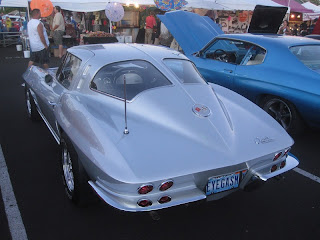 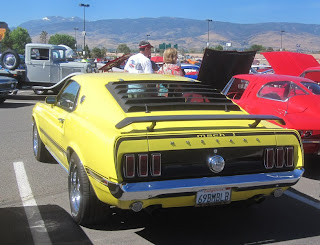 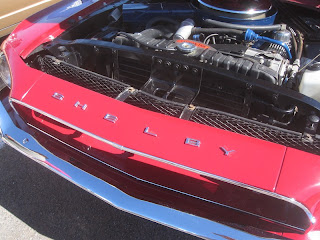 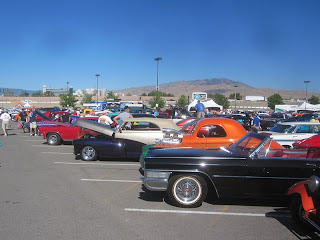 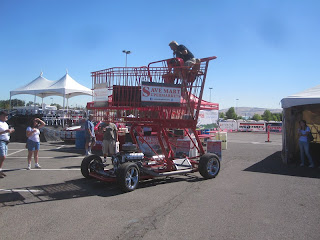 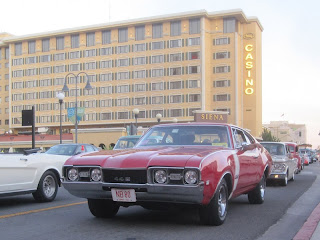 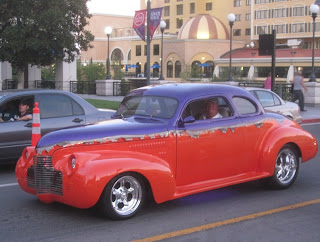 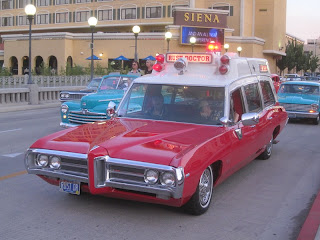 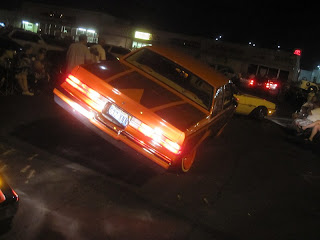