December 2015: now this is where things went off at a tangent...again! Most of the bodywork on this project was done back in 2011 when I was custodian of a very large garage in Hayward known as the green room. The body shell and most of the parts that will someday be repainted body color were stripped down, repaired, primed with PPG epoxy and treated with body filler (rinse & repeat etc.). So far so good, but when the time came to move garage the trunk lid, hood and both fenders were still in “pre-restored” condition.

And that’s how they remained, for a number of reasons, but mainly because the garage I moved to was too small to set up a welder and a paint gun. Fast forward to the Christmas/New Year holiday at the end of 2015 and I had to decide whether I was going to put a pair of horrible rusty fenders back on my nice clean car....or do something else?

The something else came down to a straight choice between stopping the rebuild to restore the fenders, or replacing them with reproduction parts and getting back on with the rest of the assembly asap. I must admit to a lot of back and forth on this. While Dynacorn™ reproduction fenders are available for less than $150 each through Tony at RPS in Hayward, I was really concerned that they would not line up properly. But then my original fenders were not in the best of shape either and I knew they would take a lot of precious time to restore. Ultimately I decided on restoration of the originals.

Over the Christmas holidays at the end of 2015 I took the fenders off the car and transported them the three blocks back to the shed I built the summer before last. Here is the "before" photo: 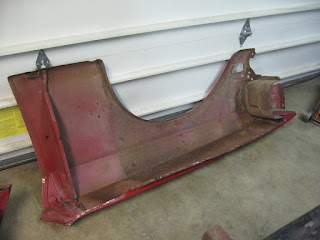 I broke out the wire wheel and ground off all the accessible rust and grot from the inside of the passenger fender. 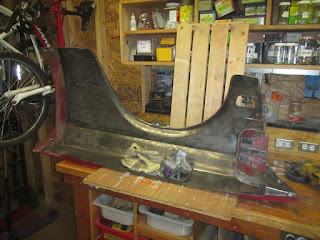 The only seriously damaged area was in the bottom corner at the rear of the fender. This area was cut out with the screaming wheel of death and replaced with new metal using the MIG welder than had been stuck inside a box for the prior four years. 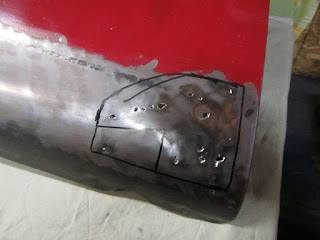 The repaired area was the filled with Bondo™ and sanded, more than once. 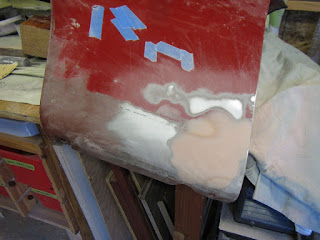 A similar repair was made at the inside. 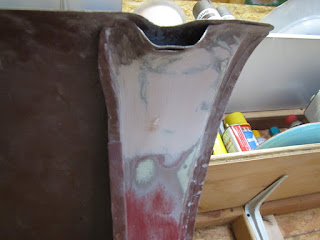 The bare metal was painted with rust converter which was sprayed in the areas I couldn’t get to with a brush. Lovely jubbly. 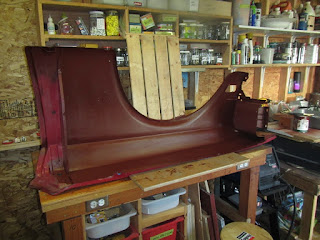 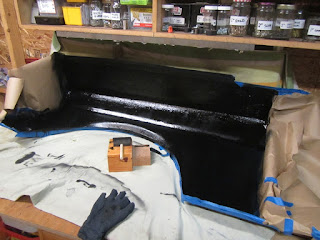 All these steps were repeated with the driver side fender over the following few days. My shed was too small to work on more than one at a time. When they were both completed, I broke out the replacement fender ornaments I've had in storage for...well years, obviously. The engine has been upgraded from the 200 cid straight six, to the 351 cid Windsor, and I wanted to mark that with the right "351W" fender badges, even though this engine was not available in the Mustang in 1968. Of the four pegs which secure the new ornament, three are in the same place as the originals so I had to drill one extra hole in the fender....better to do this now than after paint! 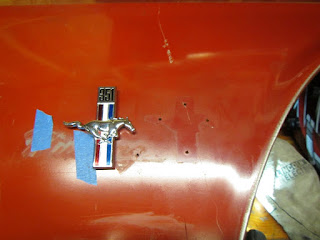 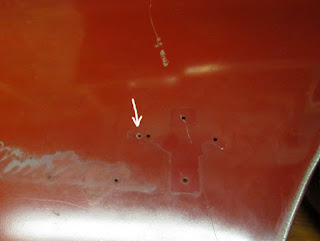 The original splash guards were in awful shape so I bought replacement parts from NPD and assembled them in my shed. 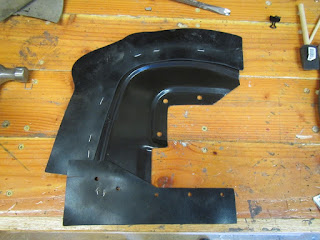 I installed the replacement splash guards back at the garage:

I also attached the front fender caps which were refurbished and spray painted with epoxy primer way back when. 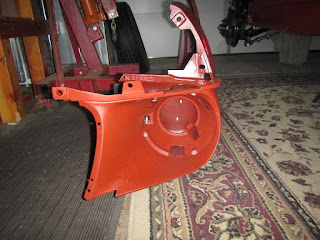 Finally the fenders were hung on the car and the headlight buckets installed.  Happy New Year 2016! 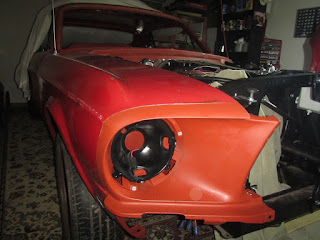 Fall 2015: the engine was in, the water and fuel pumps were installed, and the brake system was complete.

Next up: the radiator. This how it looked in about 2012 when I acquired it from one of my mates in BAMA. I think it was painted either at the last garage or at the Green Room along with most of the other black engine parts. 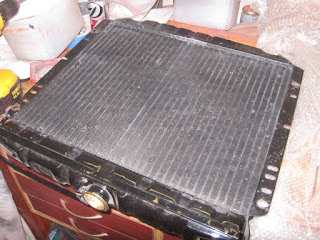 I have a custom overflow bottle which I painted at the same time along with the side panels which help attach the radiator to the car. 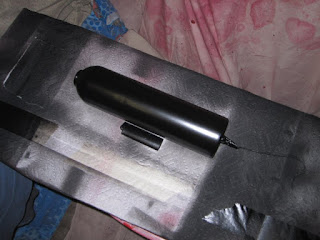 This is how the radiator looked after installation. I had to take it back out later on to do the wiring... 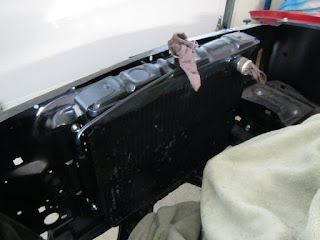 I may have mentioned earlier that step-by-step photos just don't exist for much of this period, and anyway, most of it was just bolting on shinny new parts that had been sitting in their boxes for a year or more.

I had decided to replace the original clutch linkage with a cable. Thankfully for a novice like me, the guys at Modern Driveline have produced a kit which makes it very easy to marry up the cable with the original zinc-plated clutch pedal and my modern Tremec T5 transmission. I also got a replacement speedometer cable at the same time, and I had the gears setup for the 3.40:1 differential. 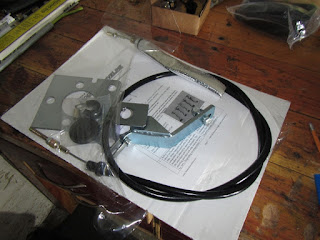 Installing the kit was easy. The only issue was that I had to remove the master cylinder and disconnect the push rod before I could install the supporting plate. Installing the speedometer cable was a bit more involved. The first one I tried was about a foot too long, so I had to get a replacement, and I had to take the instrument cluster out twice. This was all too tedious to photograph. 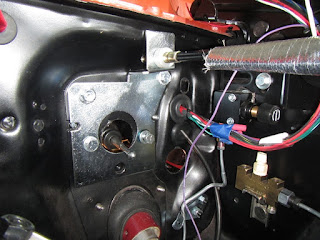 This is how the distribution block and proportioning valve looked after the master cylinder was re-installed and the brake system bled....again.... 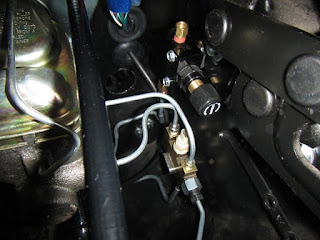 I used a welding rod to figure out the ideal shifter stick position, and then ordered the nearest I could get from Summit. 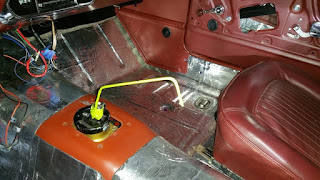 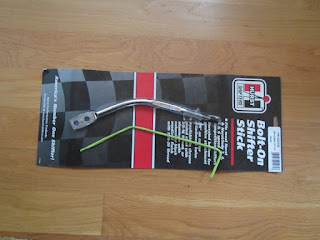 This is how it looked with my custom handle installed ;) 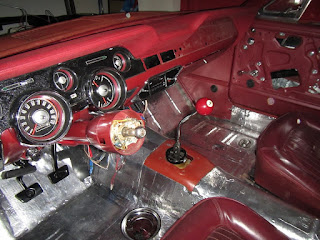 There was a time when my blog posts would start of with "....its been six months again..." Well, this one is actually being written three (3) years after the last post...and that was only some photos from a car show! So what happened? Well, the simple answer is that life is what happens while you're busy making other plans, to coin a phrase.


When I left off, in October 2015, I was still getting settled into my new garage, even though the 68 had been in situ for almost a year. I had quickly discovered that although the garage was located just three blocks from the house, in many ways, it might as well have been on the moon. I just couldn't find the motivation to saddle up and walk over there if I only had half an hour, so progress became minimal.

The house/garage move had also coincided with an expansion in our family and their needs coupled with a kitchen remodel didn't leave much time for tinkering with a car. I did carry on chipping away through most of 2016, but the pace was so slow that I essentially abandoned this blog in the summer of that year. I also became slack about documenting what progress I had made and I'd often forget to take the camera when I did find a couple of hours to sneak over to the garage.

There was an upsurge in productivity towards the end of 2016, and it really looked like the car would be running in the new year. However, in early 2017 I received the disappointing news that my landlord was not going to renew the lease on the garage. After moving the car three times since I took it apart in 2010, it was time to pack up and ship out once more.

This time around, I could not find a suitable garage space to put the car where I could (occasionally) wrench on it. It was with much sadness that the car was moved to a short term storage unit out by Oakland Airport in March 2017. Around this time it became clear that owning and living in a house without either a garage or off-street parking had run it's course. In April 2017 we began preparing our house for sale, and in August we moved to our new pad. Obviously it comes with a double garage this time and a big driveway. The 68 was delivered to its new home in October 2017. It had been away eight (8) months.


The last year has been incredibly hectic, and it's fair to say the majority of my free time has been devoted to smarting up out new pad - point your browser at this link if you're interested in that particular project - but I've found a few hours here and there to work on the Mustang, and thanks to all my buddies in BAMA my interest has been revived.

This blog was always intended to be a personal diary of the 68 restoration, and while it's tempting to post the most up-to-date progress on the car, I have decided I will build up to that by first documenting what I've accomplished in the past three years.