The story left off at the end of day #3 with the car still running in spite of a rather worrying oil leak. 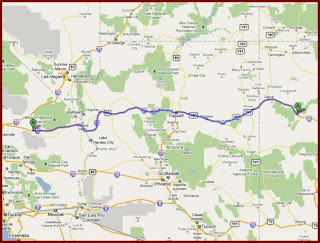 The morning of day #4, and I was back on the road really early. Within ninety minutes I was across the state line into Arizona, and the scenery started to change from flat lands to a series of valleys and gorges. Before the trip began I had considered making some stops to check out landmarks along the way - the Grand Canyon, Santa Fe, etc - but after a couple of days in the saddle all I cared about was getting home as soon as possible. 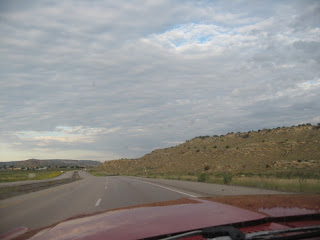 Most of the day was spend with my eyes flitting between the road ahead and the temperature gauge. Every time I stopped for gas I was adding a pint of oil, and just hoping for the best - oil was splashed all over the top of the valve cover and everywhere else by this time; I was trying not to think about the trail of oil I was leaving along the highway! Just past Kingman I saw the first signpost for LA - it felt great to be approaching California even if I was still a day and a half away from home. 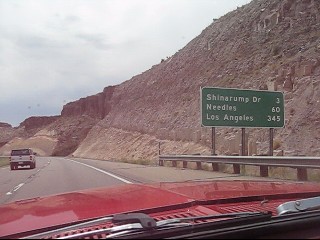 An hour later and I was through needles and into the Golden State....but elation soon turned to despair as the car's temperature gauge started to climb up to max. I stopped at the next gas station to check the oil, but before I could even pop the hood there was a hissing sound and a pool of foul smelling green liquid began to form below the motor. I had no idea what this was, but I knew it was bad news! A little bit of investigation, and I discovered that the radiator was overflowing - I guess it could have been a lot worse. Still, with the car obviously in need of another rest, and the time approaching 6:00 pm - I had been on the road for twelve hours - it seemed like a good time to stop. What made it a perfect time to stop was the old fashioned motel literally across the street from the gas station, so I moved the car over and checked in. 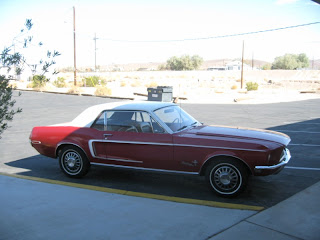 It was completely by chance, but I had actually stopped in Ludlow, CA, or at least the modern version of that town; the original Ludlow lies a few miles away on the original Route 66, and became a ghost town in the 1960's. The modern Ludlow has a fluctuating population of about 20 people and consists of a diner, a gas station and a motel. 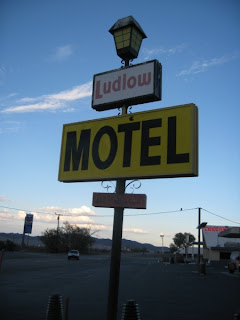 I took a walk around at dusk and snapped a bunch of pictures; here's the main thoroughfare... 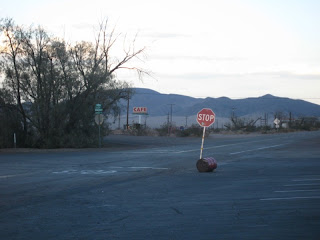 ...and the "famous" Ludlow Coffee Shop. 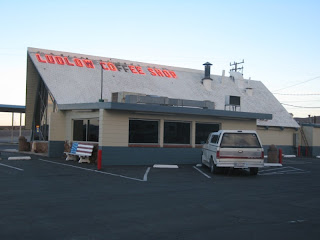 The center piece of the "new" Ludlow is a long deserted Fire House, complete with a pair of vehicles that haven't moved in decades. 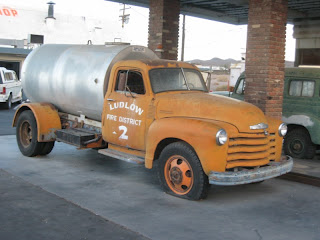 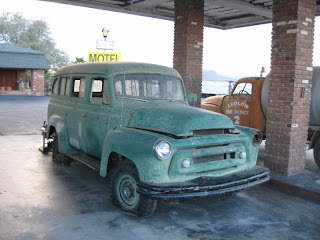 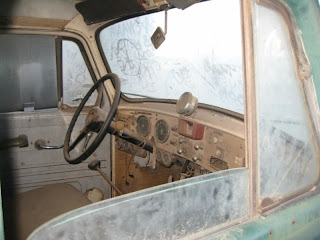 Remnants of the old fire house surround the motel... 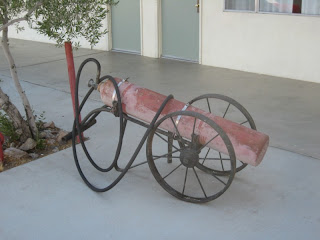 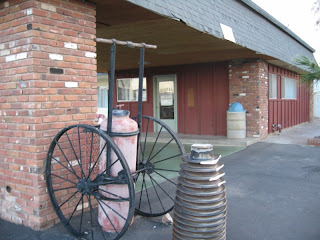 The story continues with the fourth and final part here.
Posted by Papa Sheep at 7:49 PM