Some of the cars that inspired this project

First up, our family's Europe-only 1973 Le Mans Green Ford Consul. The original Consul was the four cylinder base model of the 50's Zephyr range until it became the Zephyr 4 after the 1962 restyle. Ford briefly revived the Consul name in 1972 for use on the small-engined Granada. The name was dropped for the last time in late 1975 and all the cars became Granadas. 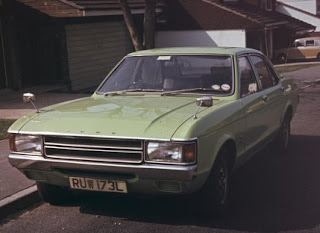 Our car came with the 2495 cc (152 ci) Essex V6 power unit. There was a classier Consul L version and also the GT which featured the larger 2994 cc Essex V6 and claimed 138 bhp.
The Consul was less well equipped than the similarly powered Granada making it approximately 1 cwt lighter - and MUCH quicker - except when overloaded with camping gear! 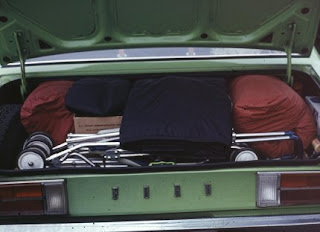 Ok, so we're at the third picture and I haven't mentioned the color! Ford called this shade Le Mans Green (paint code M in 1972-3), after their winning GT40. When my father purchased the car, even the salesman asked if sir was "sure about the color?" In the following fifteen years, we never saw another one with the same paint job. Did Ford even sell a second? There were a few Le Mans Green Escorts on the Street, but that was it...(note: this car is described in further detail in this post) 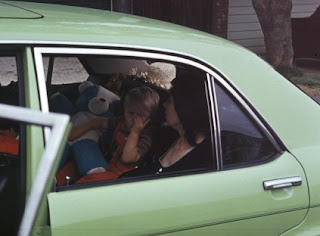 When our car got rear ended the day before a camping trip to the Scottish Highlands, our insurance company came up with a dark green Granada...it was the nearest they could get... Unlike this model, ours did not have the popular sports roof or the GT fog lamps. 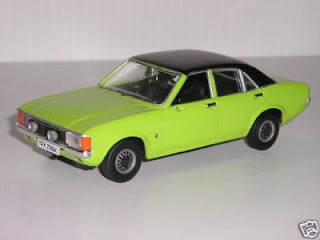 It did have the wider wheels, sunroof (which leaked by the 80's) and nylon inserts sewn into the seats...I didn't realize at the time how important this was. 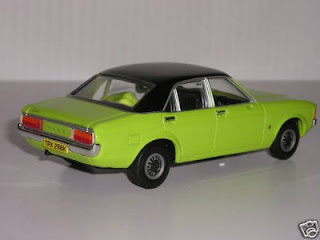 The Consul's last hurrah was a camping trip in the summer of 1985...note the heavily rusted rockers and wheel arches and numerous patches of touch up paint. Le Mans Green was a very difficult color to match up. 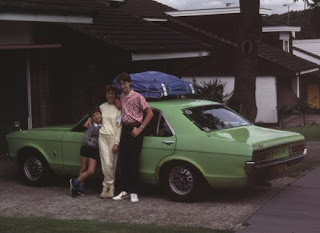 The old adage Fix-Or-Repair-Daily became a mantra around this time. Of course there are many, many family memories surrounding this car...like the sunny afternoon in the 80's when my father showed me how to "heel and toe" while driving down the 25% gradient on Succombs Hill. That was fun! 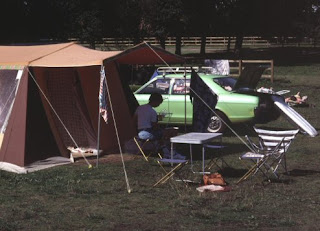 The Consul was replaced in 1986 by my father's first "Company Car" - a 2.3 liter Granada with automatic transmission and power steering. This car got rear ended an incredible three times in the short period we used it. 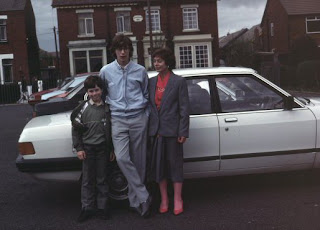 A company car upgrade in 1989 heralded a switch to GM and the brand new black Vauxhall Cartlton - 2.0 liter and back to manual transmission. This one even had a built-in cassette player. Very few pictures of this unremarkable car have survived. The interior is best described as "gray plastic". I was briefly allowed to drive this car in the 90's. 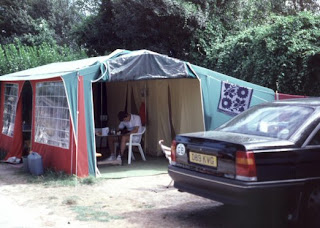 I learned to drive in my Mother's Datsun Cherry, which became the "atsun" after someone (not me!) drove it into a Rolls Royce the week before my driving test. I took this car on a camping trip to Cornwall in the summer of 1989. How the pathetic 848 cc (52 ci) motor carried 3 lads and our gear all that way is still a mystery. The clutch also broke on this trip...although that didn't stop us driving the car! 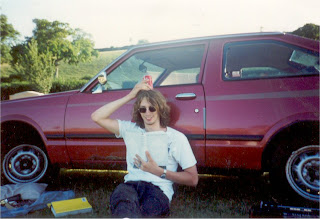 My father and I once changed the oil and tuned the engine in this car. My attempt to paint over rust at the bottom of the driver's door remains one of very few experiences of working on cars prior to the Mustang. It was not an auspicious start. 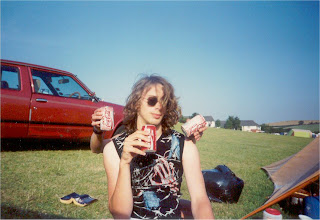 I spent the summer of '99 driving a Ford truck around New England while gathering lumber. This truck had an eight ball on the stick shift which you had to start in 2nd gear. I had a couple of "near misses" while driving this vehicle. 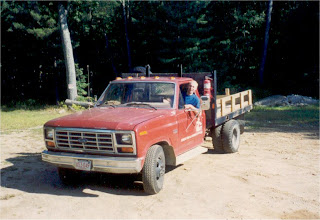 Part of that summer was also spent behind the wheel of the longest Dodge van ever made. This was the first time I drove with an automatic gearbox...it took a while to get used to. Even now I much prefer stick shift vehicles. The van had a huge "RAM AIR" emblem at the front and the fuel gauge didn't work 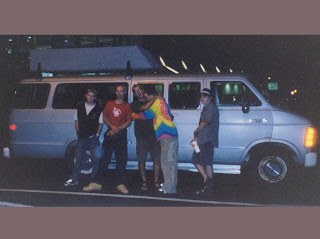 My first proper car was a mark one VW Golf which I got for 500 quid from my brother's best mate at Christmas 2001. An absolute steal ! No pictures of this car have survived, which is lucky as it was total crap. It was alright for about six months, but eventually became very unreliable. I trashed the brakes so bad one time that the rotors had to be replaced.... 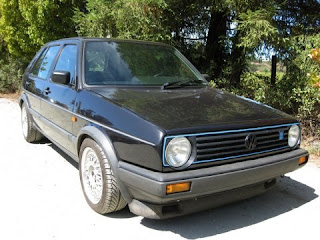 I finally got fed up with constantly taking the Golf to the repair shop...so I threw money at the problem and ended up with a three year old Peugout 106. My first "girls car" in fact. This felt pretty speedy after the Golf. I very nearly spun this car when I went over some unexpected standing water on the Fossway while caning along at 70 mph. This car is still "in the family" almost ten years later. 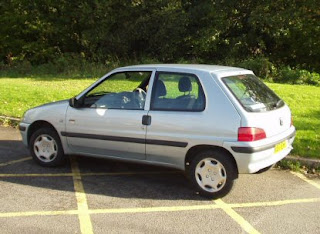 My first left-hand drive car, and second "girls car" was a silver VW Cabrio that I acquired in 2005. I did like driving this car with its very tight rack-and-pinion steering. I used the Cabrio for a year while commuting to the south bay on 880. It was around this time when I started to notice how many vintage Mustangs are on the street in the Bay Area. 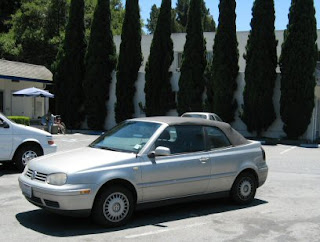 I later became custodian of the silver Forrester. This one was the 'L' model with stick shift and only a very basic audio system. The roof of this car was a mess after years of abuse: everything from a 24" ladder to a 4x8 sheet of drywall left its mark. 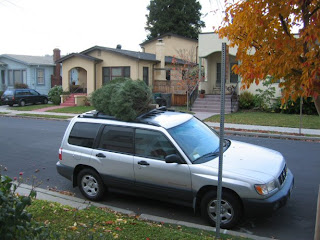 The silver Forester was totaled in 2010 - on the way to a car show of all things - and it was promptly replaced with...well...what else but another Forester. The so called "midnight-blue" car was another 'L' model, but this time it had an automatic transmission and a rather temperamental CD player. 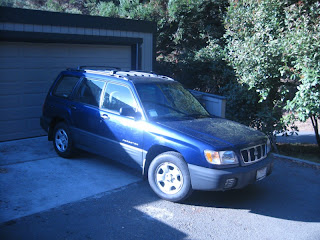 The blue car had a lot higher millage than its silver predecessor, and the motor had been replaced by my time of ownership. I never really liked the blue Forester all that much because it always felt like a pale imitation of the silver car....and so I wasn't unhappy when it took one hit too many on I580 at the end of 2011 and was pronounced another "Total Loss". 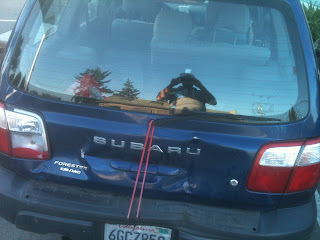 If losing one Forester was unfortunate, losing two was enough. This time I needed something a bit more...well actually, I just wanted something that wasn't a dyke car basically, something, with, how can I put it....well, something with a hood scoop! The Impreza I ended up with was definitely more sporty (it had a stick shift as well as the hood scoop), but it wasn't much cop for carrying a ladder around, and in the end I only owned it for about a month.... 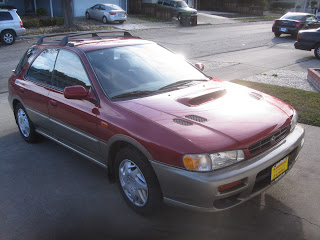 ....before I took it back to my Subaru dealer friend and swapped it for (yet another) Forester...but wait...the day I showed up, unannounced in the red car, the dealer had just taken delivery of a salvaged blue Forester...the very same one I had previously owned! A couple of hours later I was cruising up the freeway in my familiar old "midnight blue" car. Here it is a few weeks later, back on the job. 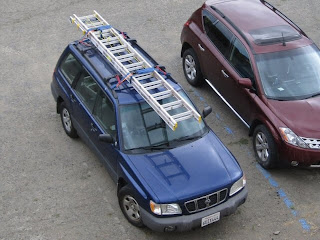 My love affair (if that's the right word, lol) with Foresters is actually based on practicalities: it's the only small suv where you can have a 24 foot extension ladder on the roof and still be able to open the tailgate all the way....vitally important for my day job. And useful on the weekends too for things like transporting a dismantled workbench: 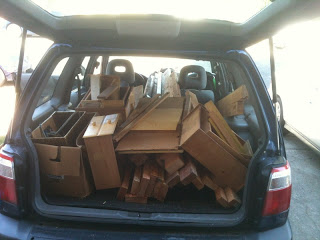 I gained a new appreciation for the midnight blue car after it came around the second time, and I enjoyed it much more: the car never let me down. Then, one day in fall 2012, a Chinese client pointed out that the "444" on my license plate was "very bad luck." I'm not usually superstitious, so I didn't think much about it at the time....but two days later the blue car bit the dust when it was T-boned at a stop sign. Coincidence? You decide. 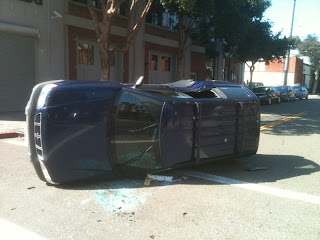 This time there was no way back :( 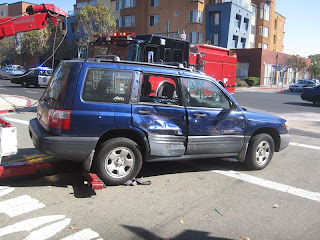 Next up...well it goes without saying, another Forester, but this time round I enjoyed a serendipitous upgrade to the "S" model and the concomitant benefits: heated seats, electric moon-roof, sport wheels, leather interior, in-mirror compass, CD changer (!) and so on. What I liked best about the black car was how smoothly it drove. The first thing I did on this car was customize the roof rack so it has three cross bars instead of the usual two - because I don't want anything to damage the moon-roof ! 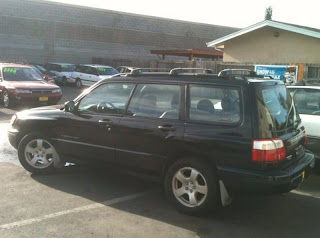 Apart from all the other benefits, my new black Forester has done 100K miles LESS than the blue car, which is perhaps the major reason why it drives so smoothly. Finally a car I really like. And hopefully the last one for a while :) 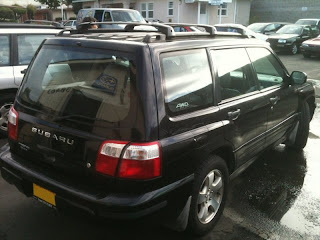