What color to paint your car? It's a tough question, in fact one of my friends from BAMA agonized for two years before settling on the merlot jewel metallic paint job you can see below for his 65 fastback. For me it was a decision I made before I bought my car: I was never intending to repaint (or restore...) the car originally, so I chose what I wanted and bought that car. However, when you have everything back in primer, it's tempting to think about alternatives. I considered for a while changing the shade of red to something lighter or more orange, but that probably wouldn't have worked so well with the maroon interior, so I've decided I'm sticking with the original Ford Candy Apple Red (note: this is a solid color and not a candy-style paint job). The one thing that will be going though is the naff white roof my car had when I acquired it. 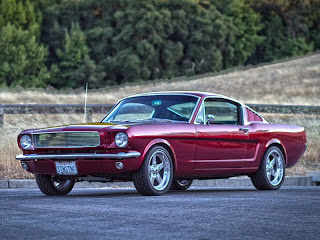 I'm still not decided on whether I'll be painting the entire car myself, although I'm leaning towards it, but I will be doing the jambs, underside of the hood and deck lid, and inside the trunk. I mentioned in my last post about how converting my garage into a paint booth takes a lot of effort, so I decided I would do a bit more than just the epoxy primer. I picked the trunk as my starting point because I wanted to have a go at spraying urethane base coat/clear coat somewhere where it doesn't matter - most of the trunk will be covered up with mats, spare wheel etc, so I couldn't really go wrong. A lot of the car was already masked off from painting over the new body work so I just had to expose the trunk and seal it off from the rest of the car. 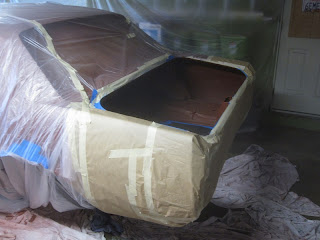 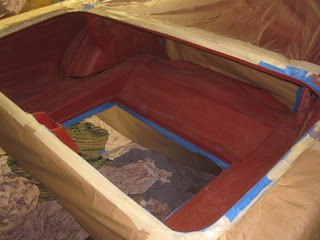 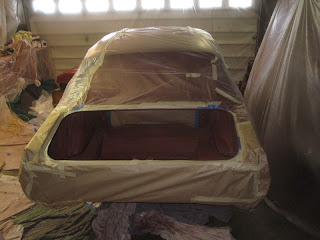 It doesn't show that well in the pictures, but before I started painting I scuffed up the trunk real good with a scotchbrite and wiped down with denatured alcohol. Then I laid down a thin coat of PPG DP74LF red oxide epoxy primer which I mixed 2:1 with DP401LF activator as usual and then added one part of acetone (so a 2:1:1 overall ratio). While the primer was flashing I mixed up the urethane base coat: I used PPG DBC "K" Color to which I added DT870 medium reducer in a 1:1 ratio. I sprayed on two coats with a 45 minute flash time. I followed up with two coats of urethane clear made up of four parts of DCU2021 with  one part DT870 reducer and one part DCX61 urethane hardener (4:1:1). It came out really well with just a few (mostly inconspicuous I hope) runs. 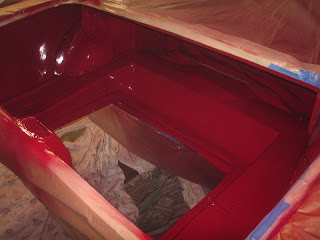 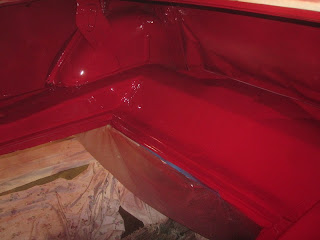 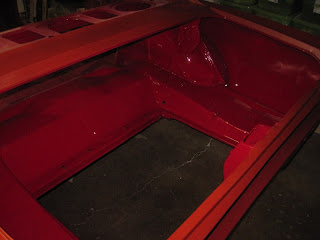 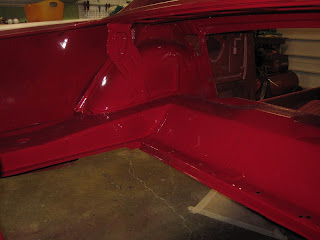 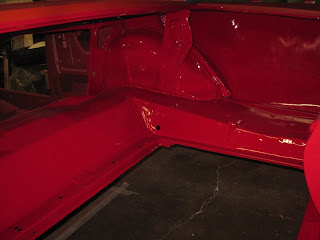 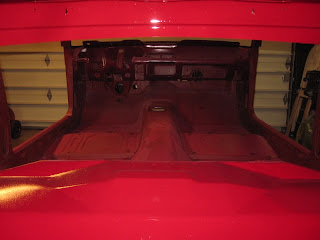 At the same time I did a bit of work on the gas tank. Started by masking off the top side: 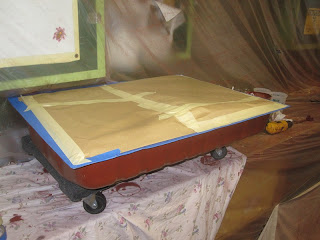 Then I scuffed up the underside and sprayed on a very thin layer of epoxy primer and two coats of clear coat. This look will match the underside of the car. 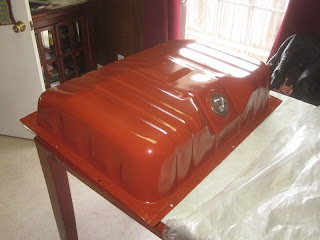 I let the clear coat harden overnight and then masked it off before scuffing up the topside/trunk floor. 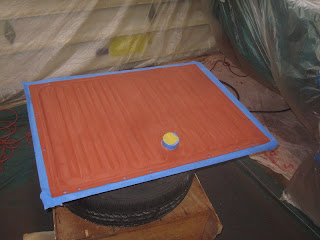 The top side got the red base coat as well as the clear because I want it to match the trunk, even though it will be mostly covered up. This came out really nice without any runs. So happy with my choice of color! 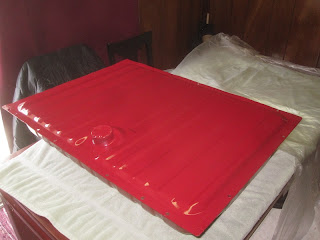