A few weeks back in part one of this mini-project I began work on smartening up the mess in the picture below. 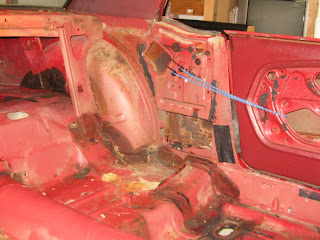 After I had painted Zero Rust inside the quarter panels and C-pillars, cleaned the excess adhesive off of the inside surfaces and scraped off the worst of the cracked seam sealer, I was left with something like this. 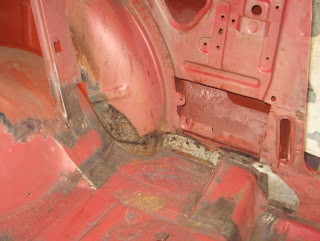 It had been my original intention to paint over the bare metal, replace the seam sealer and move on...but not so fast. There was actually quite a bit of surface rust inside the passenger compartment, for example on the area below the package tray, and I just couldn't leave it. 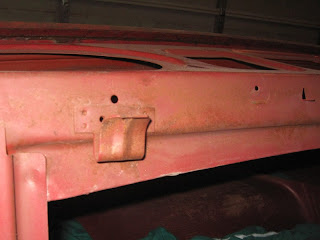 Another place requiring attention was the inside of the rear window, although the rust in this area is not as bad as it looks in the next picture - most of that gunk is actually residue from the headliner adhesive. 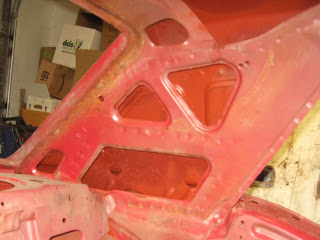 So, yet again, I fitted a 4.5 inch wire wheel onto my angle grinder and got stuck in. Compared to working on the underside of the car it really wasn't that bad, just noisy and uncomfortable. Here's a picture from part-way through the process. 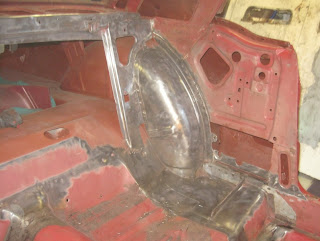 A little bit more grinding, and I uncovered another burn hole in the weld around the rear seat clip - who knows whether this was done at the factory or not, right now it's just another thing to fix before I can apply the epoxy. 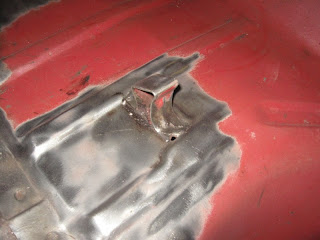 Progress so far: I'm probably one more grinding session away from being done in the rear half of the car, and then I can mask off the trunk and rear window opening and get the paint gun out. 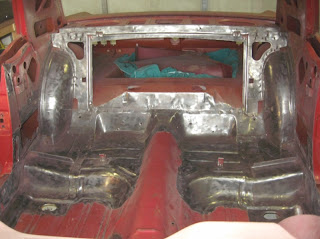