more on the doors

Time to paint the doors and the rear valance...well sort of...I wasn't actually sure whether I should work on the body filler first, and then paint, or apply the filler later over the top of the epoxy primer? I searched around on the net, and VMF, and even posted a thread on the latter, and all that left me as confused as ever. This is obviously a question on which every restorer has an opinion...and they're all different! So I did what I always do when I'm stuck with something on my car: I turned to the guys in BAMA for help - after all, this is why I joined the club in the first place.

Initially I wanted to prime the doors now, and get stuck in to the body filler some time in the future, but I was convinced to rethink this strategy. The informed opinion is that filler definitely bonds best to metal, and rough metal at that. While applying a very thin skim coat of filler over the top of epoxy primer is considered OK, on the basis that most of it will be sanded off, major repairs should be done before painting. The damage to the front edge of my passenger door was most certainly in the "major" category, so I broke out the bondo! Incidentally, if you're facing the same dilemma, a couple of articles worth checking out are Using Body Filler, by Read Overson, or this one from Autobodystore.com, where the author does some actual experiments (note: the validity of these experiments has been questioned in terms of preparation of the metal although they look alright to me).

But hold on, before I could get to the filler, there was one other thing to take care of: the rust on the front edges where the hinges connect to the door. Not a huge problem, but one that couldn't be ignored either. 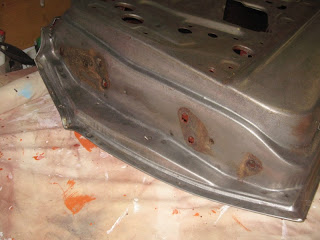 This seemed like a perfect opportunity to try out some Naval Jelly rust dissolver - I got this from my local ACE on the recommendation of a mate who uses it to clean rust off of garden tools. 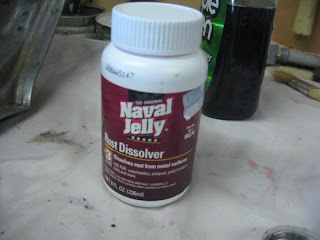 I have to say that I was surprised at how well it worked. It takes a lot of water to wash off the residue, and my guess is that it would not be as effective on heavily corroded metal, but on this occasion it got top marks. Here's the "after" picture: 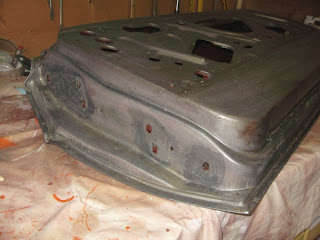 So, on with the filler. The passenger door actually has an interesting history. It originally came from a springtime yellow '67 car, and during its time on this vehicle it took a severe knock at the upper front edge. It's possible that whatever caused this damage was serious enough that the car was scrapped...and the door salvaged before being transferred to my car and given one of the most awful red paint jobs ever witnessed. So, to recap, this was the damage to the door after I removed the old filler and paint. 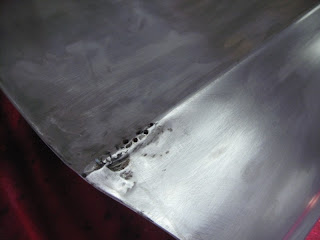 After mixing up some filler, applying it to the door and waiting about 20 minutes, I was ready to sand. The first objective was to establish a straight line at the apex, which I achieved with a rigid flat block and some 80 grit sandpaper. 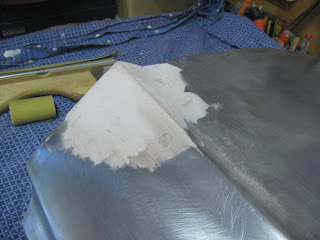 And then I was stuck, as I couldn't really go much further with just a flat block...so I sought out some more help, and my buddy Chuck came to the rescue with a curved sanding block and a roll of self-adhesive 80 grit paper. He also gave me a valuable lesson in sanding: always work in a diagonal fashion across the repair, then change direction so you in an "X" pattern. 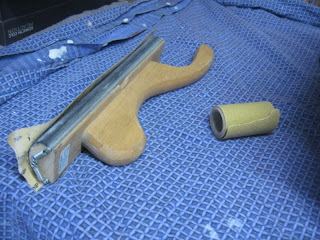 The door kept moving around on my bench so I improvised a locking system: 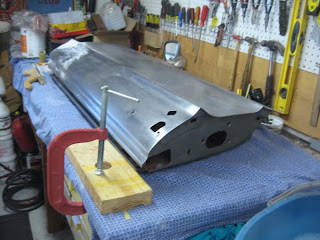 After about 20 minutes sanding I was very close... 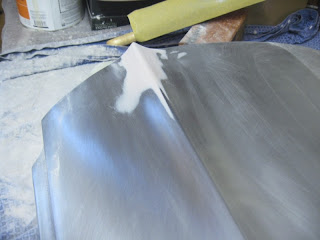 ...so I mixed up some glazing putty and spread in over the repair area. 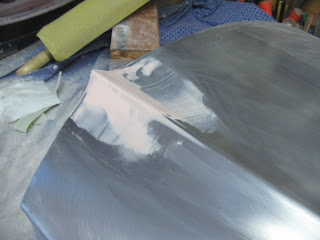 After waiting for the putty to dry I finished up the sanding. The repair isn't perfect, but it is as good as I can get at this stage - I will no doubt return to this area later on when the door is back on the car and aligned correctly with the fender etc. 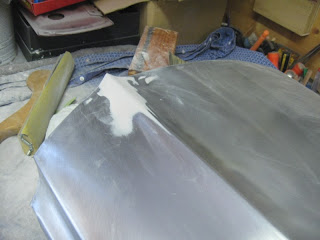 So ready to paint now? Well I was thinking so, but then I noticed a very small spot of rust at the lower front corner - I had actually spotted this damage before, but inexplicably forgotten about it (!) I did consider leaving it, or dabbing on some Zero Rust, but the thought of the rust poking through my paint job in a few years time was enough to frighten the life out of me! 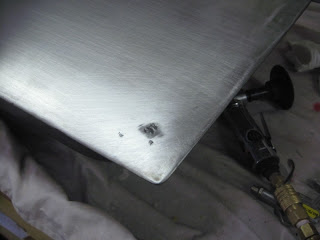 The first step was to get rid of the rust with a very small grinding tip on the end of the Dremmel. This left four small holes in the outer skin on the door. 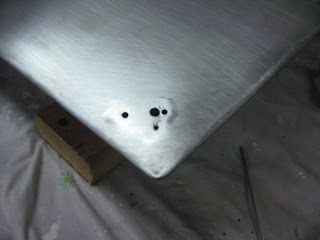 I used a tiny brush to paint Zero Rust inside the holes and then filled them with the MIG. 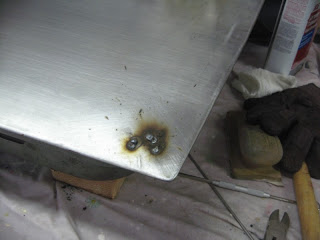 Ground down the welds so they were very slightly shallow... 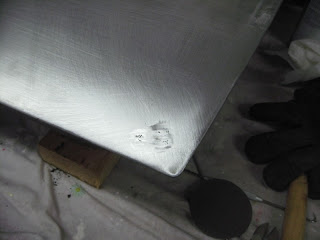 ...and covered the repair with some glazing putty. 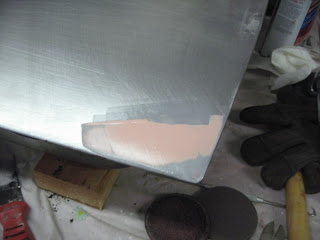 After sanding smooth with some 120 grit paper I was finally ready to prime the doors. 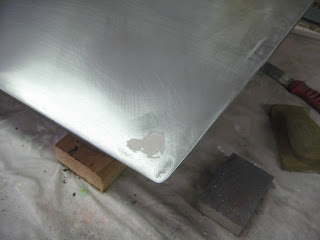