At the end of part two of this series I was almost done with the wire wheeling in the rear of the inside...or so I thought. I did eventually get the rest of the surface rust off in one session, but it took a lot longer than I planned. I started off above the rear window, where there was a ton of crud to remove: 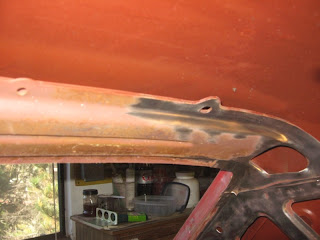 The C-pillars were in better shape, with rust restricted to the edges of the openings, but I just took all the paint off anyway as there's nothing like completeness. 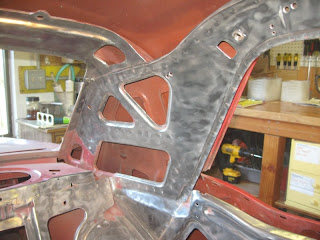 I found I couldn't fit my angle grinder or die grinder into the tight corners, so I dealt with these areas by using a stiff wire brush dipped in lacquer thinner.


Lastly I cleaned up the package tray - there was actually very little rust in this area, so I could have probably left the original finish, but the perfectionist in me felt the need to expose the bare metal. 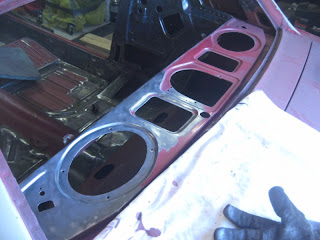 Before I could do any masking around the rear window I had to scrape off all the old sealant - I should have done this months ago, but couldn't find the motivation. This task took a good long time, mainly using a rag soaked in lacquer thinner and a small piece of plastic bondo spreader where the gunk was the thickest.

So with all that grinding done, the car was looking like this: Next I gave the entire area a really good going over with a the usual rag soaked in lacquer thinner, until all the surface dirt and grit was removed, and then sanded by hand with some 120 grit paper, and then repeated the lacquer thinner wash down (tedium at it's peak!)


Finally time to start masking! I've said before in this blog that I love masking my car, and I freely admit that the amount of tape I use is excessive to say the least...but it's so much fun! I started around the back window opening with some low-tack decorators tape. 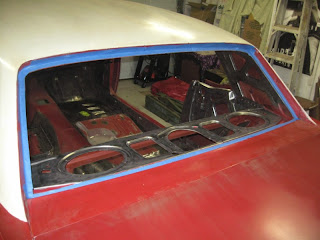 Then I applied strips of 1.5 inch masking tape to make a grid, with the sticky side facing inwards (or towards the side where the paint will be sprayed). 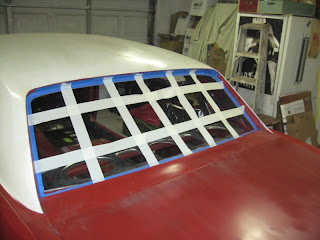 Same in the door opening, although I left a small gap so I could squeeze myself and my paint gun inside the car! 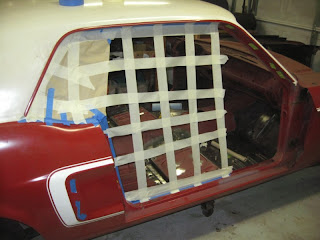 To finish off I pressed pieces of masking paper against the tape from the inside, and used more tape to cover gaps at the edges and joins in the paper. 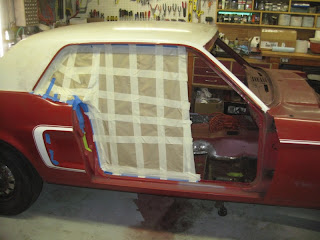 I left a little bit of the trunk area exposed so I can overlap with the primer from last time. The previously primed bodywork was scuffed with a Scotchbrite before I did the clean up. I also taped over all the small holes in the floor pan etc, from the underside. 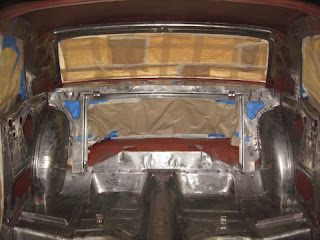 Finally I put my trusty car cover over the top, just leaving a small access opening at the front of the door, and spread the usual dust sheets on the floor and over all the other gear in the garage....then it was time to get out the paint gun. 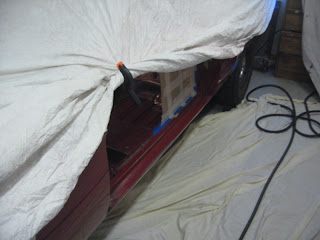 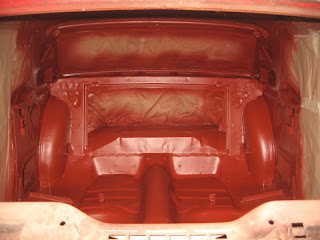 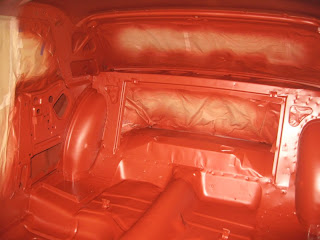 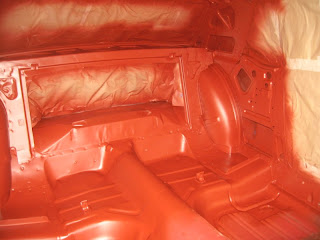 I had a bit of primer left at the end, so I gave the rear half of the roof a quick going over; there wasn't really much benefit in this as I already painted the underside of the roof with Zero Rust, but at least I covered up the worst of the brush marks...not that anyone will ever see this area. 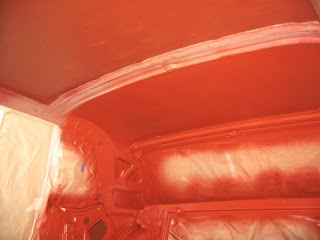