I had never worked on any type of car before I bought my Mustang. Apart from some experience of basic welding and fabrication after I left high school, I began as a novice in this project. I needed a lot of help to get started, most of which came from members of the Bay Area Mustang Association, BAMA 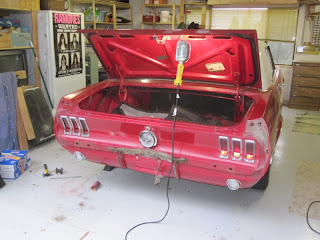 I started properly working on the car over new year 2009/10, but at that time I had no intention of writing a blog about the restoration. As I got more into the tear down, I began to rely more on the Vintage Mustang Forum, VMF and other blogs like this one for help with getting things apart. Eventually, I decided to put my own blog together. I will be going back and capturing the work I've done, and then there will be irregular updates as the project drags on... 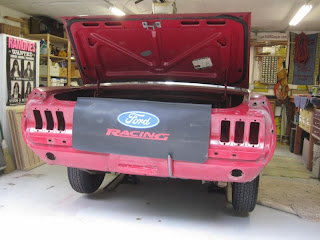 Currently I am taking my car apart so that I can do all the paint and body work at once, instead of in stages like I first planned. I am removing all the parts systematically, and taking my time. A lot of parts will probably be replaced eventually, but for now I am keeping most of everything. 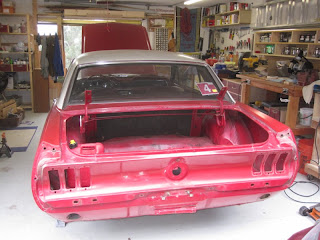 I began the tear down at the back, as I had previously been doing some bodywork repairs in this area and had already taken of the bumper and the reflectors (my car is the later '68 version with the bolt-on rather than recessed rear reflectors). At the point of starting this blog - middle of March 2010 - I had removed most of the rear trim from the car as you can see below: 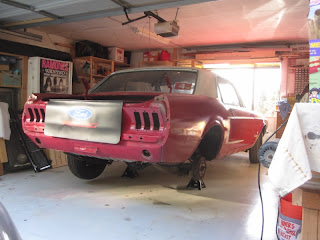 Email ThisBlogThis!Share to TwitterShare to FacebookShare to Pinterest
Labels: mustang