Now then, now then, safety first: taking the trunk hinge torsion springs in and out is a dangerous operation which has been known to result in the loss of fingers. I've written before about how to do this safety, and I've given away the plans to a very useful tool I made for the purpose. In fact, I thought I was done with this operation after my last house move. 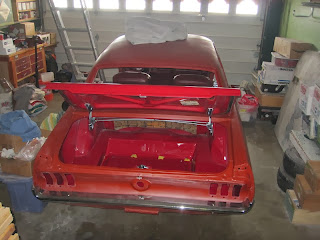 But no. And this little story is a peach. So I got a bit carried away with the zinc plating and through in everything I could...including the trunk springs. What I didn't know when I did this (although I should have given my history in organometallic chemist!) was that hydrogen starvation in the plating process weakens the springs. Months after I moved, I went to open up the trunk and discovered both springs had snapped. Oh dear. I mentioned in my last post that I snaffled a bunch of parts from my friends at Mostly Mustangs, and the trunk springs were the first thing I grabbed. This time though I just cleaned them up and painted them gray. I had to wait until I turned the car around before I could get the room to work on the trunk. After that the installation was easy. It should be...I've done it enough times now. 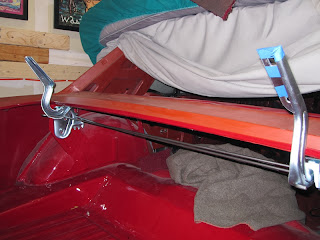 I took the gas tank back out and used the trunk access to get the deck lid perfectly aligned. This took rather a lot of rinse and repeat to get the lid spot on. When I was finally satisfied, I drilled some 1/8" dia. alignment holes through the hinges. Next time I take the lid off, putting it back right should be much easier. 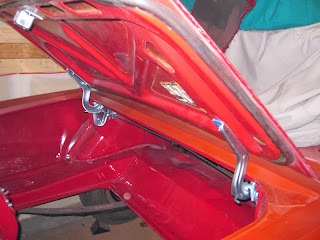 I caulked the seal at the gas tank and installed all the bolts. I was careful not to use too much caulk after the trauma I had taking the tank out the first time. I also re-installed the filler neck and most of the flip-top gas cap (more on that later). 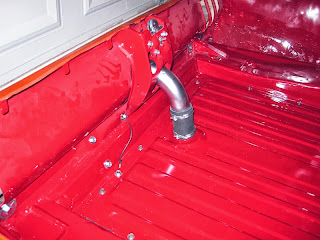 I wanted to install the rear bumper and license plate while I had access to the back of the bar, but I couldn't get the passenger side bumper support to fit around the rear valance. I'd actually forgotten that before I owned the 68 it had been taken some minor damage at the rear. This involved some re-working of the rear valance and a few other things, but I guess I never noticed that one of the bumper supports was also bent. When I compared the two brackets through, it was obvious. Not exactly the most difficult repair to make - I just put the bracket in the vice and leaned on it, but I was happy to do this before the final paint had been applied. I guess this is why you do a dry build! 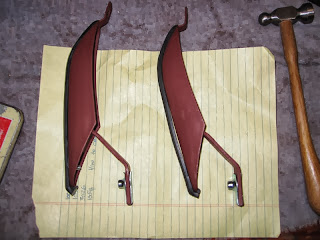 While all this was going on, preparations for the enigne rebuild were still ticking over. All the rusty hardware got soaked in Marine Clean, worked over with the wire wheel, and zinc plated. 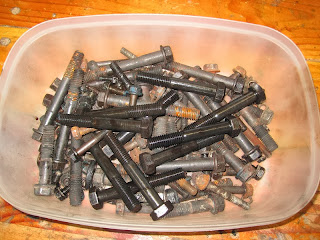 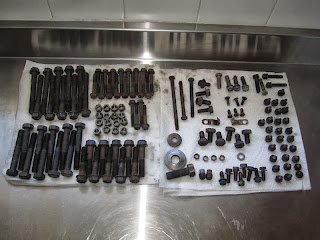 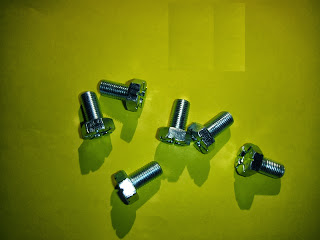