The gas tank is theoretically easy to remove, but for me it was a real PITA! I started by siphoning off the gas and transferring it to one of my other cars, and then I ran the car for a few minutes to get rid of the last bit of gas. It's best if you do the last bit outside of the garage unless you want to get CO poisoning. 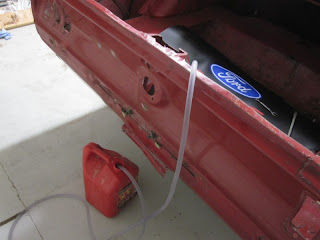 Disconnecting the fuel line and sender unit underneath the gas tank is easy. 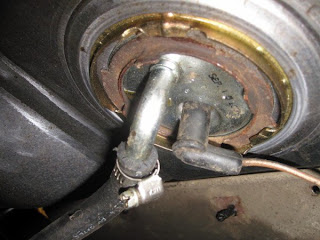 I didn't need to look at the filler-pipe-to-tank connector for long to work out that it was a repro. 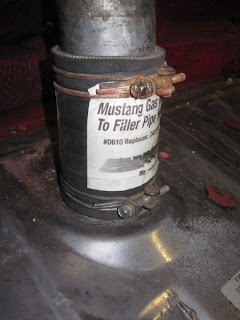 The fuel filler pipe should be fitted with a cork gasket. This one is a recent replacement and is good enough to reuse. The filler pipe looks like it may be original. 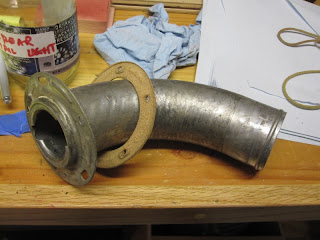 I cleaned up the filler pipe with a wire wheel. If I decide to get this plated later, I will need to do a better job of the polishing. 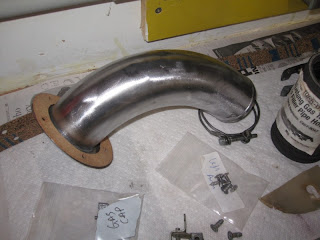 The fuel tank is held in with a dozen or so bolts...and a mother-lode of what looked like rubberized gasket sealer (?). After I removed the bolts, I tried prying on the edge of the gas tank but it was stuck fast. The trunk was already pretty well scratched up, but I still did not want to go in with a crow bar. In the end I tried an idea from one of the guys on VMF. I basically put the floor jack under the gas tank*, lifted the car up until the wheels were off the ground, and then let the car sink back down. It took about 20 minutes, but then the gas tank lifted straight out. *If you're going to do this, you need something to spread the load out over the whole of the gas tank. I used a three foot section of 2x12 lumber I had in the garage. Getting the goop off of the tank and the car was a nightmare...it was slightly soluble in penetrating oil, but even so, it is a really messy business getting rid of it. I must have used a million shop towels...but eventually it was all gone and I could stash the gas tank in the basement. 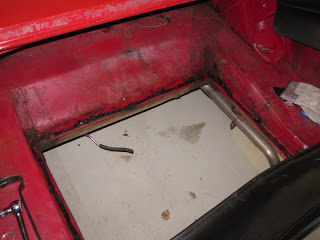