It's been a couple of months since the engine came back. I've been chipping-away-at-getting-ready for the rebuild. First objective was to get the block back on the engine stand and paint it. Most people assemble the engine first and then paint it, but I never do what most people do. I had to put my tried-and-trusted  methodology into practice to get the block up on the stand.


This was where I found my first issue...the remains of a broken bolt or something stuck in the block. I've no idea what this is was actually, but I knew it needed to be removed. 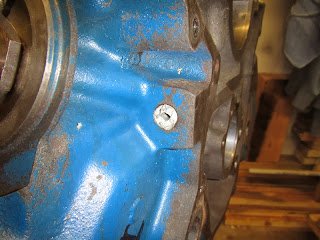 The first thought I had was to try my screw extractor....but that just snapped off too. Oh dear. This happened to me the only other time I tried to use a screw extractor, so I think I'll give this idea a miss in the future. 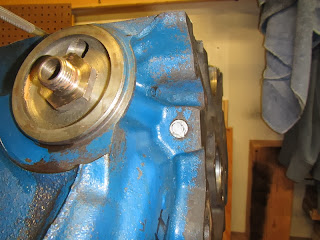 I recently acquired a very large box on 1/16 drill bits and I ended up donating several of them to the cause. I was fortunate that the bolt thing was aluminum, otherwise it would still be stuck in the block. After literally drilling out the remains of the bolt, the piece of screw extractor was liberated and I chased out the thread with the appropriate tap. Hopefully I got away with this. 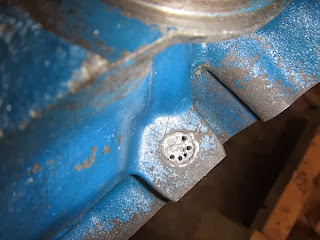 After losing a couple of hours to the "bolt thing," I scrubbed the block down really well and masked off the bits I didn't want to paint. 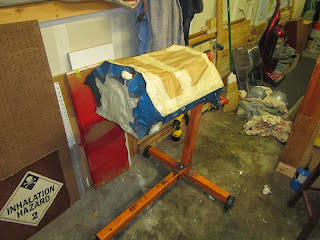 If you're expecting to see a shinny Ford Blue block in the next pic, you'd better look away now. Frankly I've never understood the blue engine thing. I'm going to be driving a red car with a black engine compartment. The accent pieces are gray, chrome or (mostly) zinc plated....why would I want a blue engine? It's got to be red or black surely! It's actually going to be Ford Red, Dupli-color ceramic engine paint, code DE 1605, to be precise. This is significantly brighter than the candyapple red that will be on the car. But it's still red! 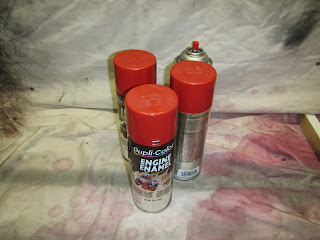 The machine shop already converted the timing chain cover and oil pan from a pair of very dirty specimens into pristine parts, and I painted them too. 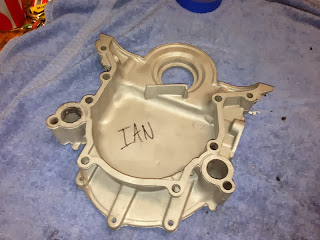 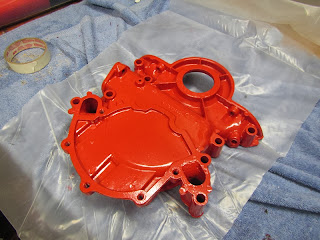