getting started on the turn signal hood

It has been a while since I last worked on my car - so long in fact that I found time to look through some of the pictures I took that haven't previously made it into my blog. The story of the turn signal hood is one mini-project which was thus "unearthed."

Around the turn of the year I acquired the rights to a rare example of the 67-68 Turn Signal Hood from one of the guys in BAMA. My understanding is that these hoods were part of the GT options package, and while that may be wrong - lmk if you know better - what is certain is that original examples of this particular hood are highly sought after. I mean repros are available, but we all know what that means in terms of quality, and when you look at the shipping charges, it becomes an expensive item.

I didn't actually need to replace my stock hood - like the rest of my sheet metal it's in great condition - and I hadn't even thought about doing so until one afternoon last August when I went over to my friend Larry's place to borrow a paint gun. While we were talkin' cars, and, as you do, picking through the piles of Mustang parts scattered about, I noticed a bunch of hoods leaning against the fence: there were actually two turn signal hoods in the stack. At the time my mindset was nowhere near taking on this kind of project, so I didn't think much about it...but after a few weeks of pondering, and reading this post from Alex, I knew I had to have one of the hoods for my car, and a few weeks later I did. 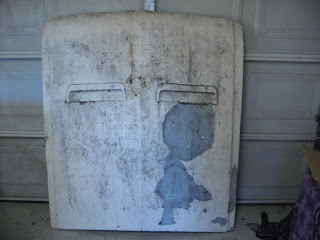 The hood actually came from a 67 fastback that has been mostly transformed into an Eleanor clone. When I acquired it, both louvers and housings were intact plus the original wiring harness - and both bulbs, but at the time I was also in the middle of another phase of the project...so the hood just sat in the corner of my old garage... 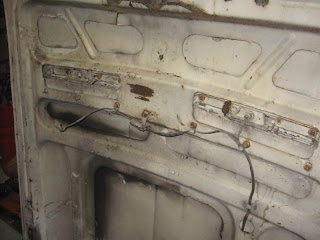 And that's how it stayed for a while, just leaning up against the wall in my old garage...but I just couldn't resist tinkering with it a little bit, so I started by taking off the louvers, which requires undoing seven stud nuts per side, and the turn signal lenses slide out at the same time - you can't see this in the picture below because of the dirt, but both sides have orange perspex windows. 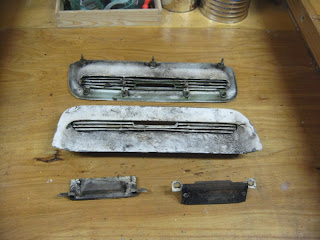 This activity left the hood ready for paint stripper...and that was too much work to just dive into, so I found a place to store the hood out of the way and returned to working on the inside of the car. 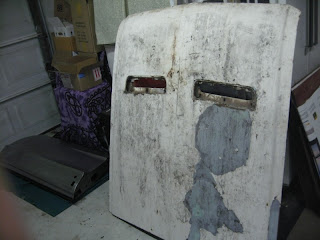 But the louvers were still on my bench. Cleaning them up actually made a perfect evening project as it didn't require generating any noise. I started by dismantling the flasher units: the plastic cover is held to the housing with two small screws and there is a gasket in between - in this case the gasket that has definitely seen better days... 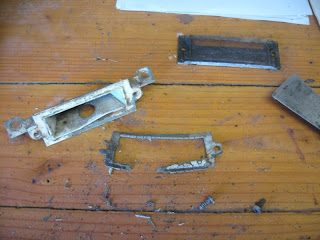 The grill at the front is held to the housing with four very small rectangular tabs - you can't really call them nuts - that I had great difficulty in removing. I finally got them off by the destruction method...something else to add to the "parts needed" list! 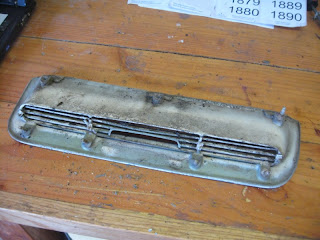 After cleaning with some soapy water the parts came out quite nice, but the white paint was cracked and chipped around the edges so I reached again for the aircraft stripper. 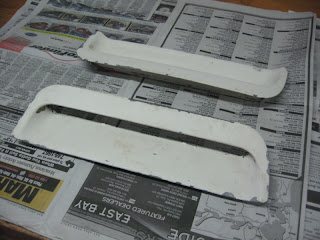 Underneath the white was a layer of greenish paint, could be the original color for all I know, and then under that the usual Ford gray primer. 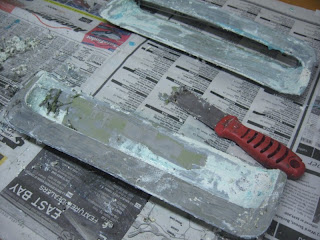 The primer was mostly too tough to remove with the aircraft stripper, so I got as much of it off as I possibly could... 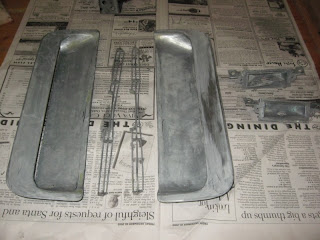 ...and then finished up by wet sanding with some 120 grit paper...there, nice and shinny and all ready for primer. 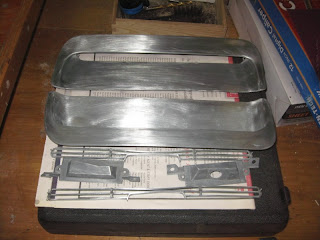 While I had the paint gun out I gave the hood parts a couple of coats of epoxy primer and hung them up to dry. A few days later they were ready to be packed away for the foreseeable future. Something tells me the hood itself will be a much tougher proposition. 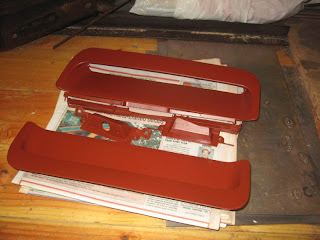