should I stay or should I go?

You have got to let me know. Well, no you don't actually, because it's already over, and the answer was "GO". If you're wondering where this is heading (cough), it's a long story...isn't it always...which started back in June when I took out the windshield. Removing the front glass was a straightforward decision: it made accessing the dash area way easier while I was tearing that all down, and it had to be replaced anyway due to a couple of huge chips. So the windshield was pulled out and stored in the basement...where it will probably stay for a long time after the car is back on the road.

The backlite meanwhile was a much tougher customer. Literally. The original plan, after very little consideration, was just to pull it out too. Back in June I started trying to get the trim off the rear opening. Like the front, I followed Mark Stang's video for removing the trim - except it was much harder to do at the back. The side trim pieces are held on with screws...easy enough...but (as it turns out) the rear window trim clips are a slightly different shape to the front, and much harder to "pop off" as it were...except I didn't know that until later. So the backlite just got left in, while I asked around for help removing the trim...only I never did. It was always on my "to find out about..." list, but never made it to the top.  So the car sat like this for about four months while I worked elsewhere. 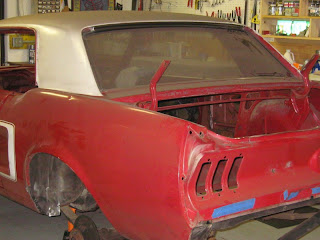 Recently a couple of different friends have been giving me the 'if it aint ripped, leave it' mantra about the headliner, and with the back window still in situ, this was starting to make sense. I mean the headliner wasn't ripped or torn at all, the only defect was some minor fading (darkening) everywhere but behind the sun visors. So I left the backlite and rear window where they were. When I started on the trunk area, I was planning to work around the rear window as far as I could. This went very well for a while (more on this later), but then I took a peak at the inside of the C-pillars behind the headliner...and I quickly realized the headliner and rear window had got to come out. No question about it.

So...I set to work at the top strip with a variety of trim removal tools I got from Eastwood. It was not easy, but after wiggling various objects around under the edge of the trim, I managed to get two clips loose at the passenger side. Then I just slid the trim all the way out. I would not recommend you try this, but I managed it somehow, and without damaging the trim or the bodywork. Phew. Unfortunately, nothing I tried could get at the clips holding the lower molding. So I tried a different approach: I cut off the outer edge of the rubber backlite gasket with a razor blade, and pushed the glass out from the from the inside. It was a cinch to do. The only problem was I found myself standing in the trunk area holding the glass. I somehow wiggled myself and the glass out from under the car (it is still on stands at the back). After this delicate operation, stashing the backlite in the basement was the easy bit. A replacement rear window is $$$ not to mention the $$$ for shipping, so this will definitely be going back later. With the glass out of the way, getting the lower piece of trim out was no problem. 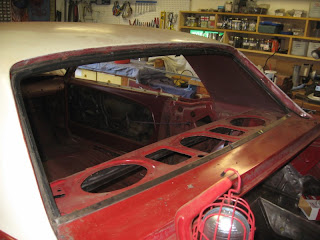 The opening was filled with the usual mixture of dead leaves and general grot that I have become accustomed to while taking this car apart. Most of it when straight up my vacuum. 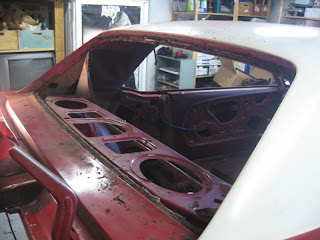 Onto the headliner then. Mostly the removal was so easy that I neglected to take any photos - just a matter of popping out the bows at one side first and working front to back. Then I found the thin wire hangers above the backlite opening...these were really tough to get out, and in fact I ended up tearing the headliner in the process. I dread to think how I am ever going to replace these little hangers. 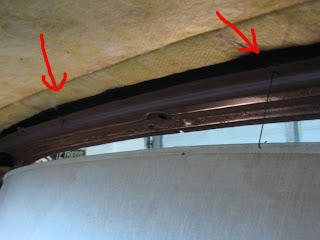 Here's the headliner after I got it out. The patches at the front are closest to the original color. 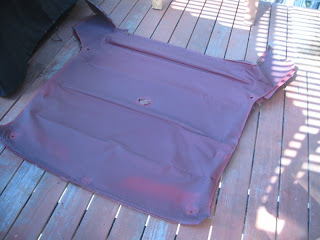 The underside was heavily water stained around most of the perimeter. This picture was taken before I pulled out the supporting bows, which fit inside tightly sewn tubes in the material. Due to the shape of the bows it was impossible to get them out without destroying the stitching - it just seemed to disintegrate. I think the age of the headliner fabric and stitching was a big factor in this - I certainly hope so, as the bows will have to go back one day and I don't fancy sewing them in. 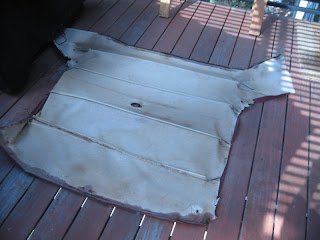 The first thing I noticed about the bows was that several of the ends were covered with red over-spray - isn't everything on this car! The second thing was that they are all slightly different sizes and shapes. The golden rule with parts like this is simple: make some notes. In the digital age, a quick picture is mandatory, and it also helps to draw a quick sketch. This should take some of the stress out of installing the new headliner...although I have been told it is a total PITA. 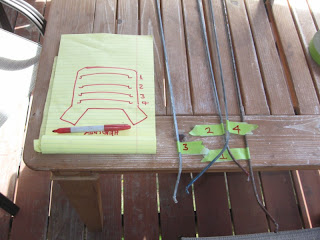 This is a picture of the surface rust on the inside of the driver side C-pillar. The other side is very similar. A quick glance at this when I peeled back the headliner and I knew I couldn't leave it as it was. Fortunately there are no serious rust issues, and unlike one of the guys in BAMA, I didn't suddenly discover any homemade sunroof-related horrors. 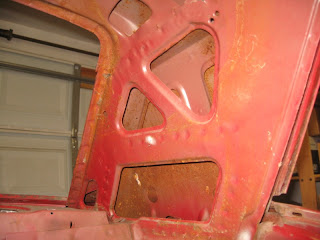 The yellow insulation I found under the roof was the same as the piece I pulled out from under the backseat. I'll be replacing all this later with some modern material. 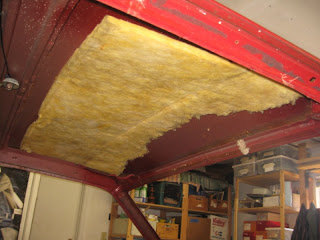 The perimeter of the roof had surface rust all the way around - not really much of an issue, I just have to figure out how best to treat it. 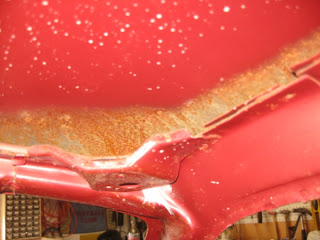