OK, so the axles are ready and waiting to have their new bearings pressed on, and it's onto the housing. With the third member yet to be removed, the axle housing was heavy and awkward to maneuver. I made a few of chocks out of a scrap piece of 4'x4', and set about getting the third member ("pumpkin") out. This was tough. Following the advice of Chuck from BAMA, I started off by whacking the carrier with a dead blow hammer...this didn't get me very far, it must be said. I couldn't really use the Olshove technique, because I don't have an engine hoist....so I tried the razor blade method. Essentially this consists of poking at the very edge of the carrier gasket with a razor blade while being very careful not to damage the mating surfaces...and then whacking some more with the dead blow hammer...and repeating...ad nauseam...while thinking about going out to by an engine hoist! 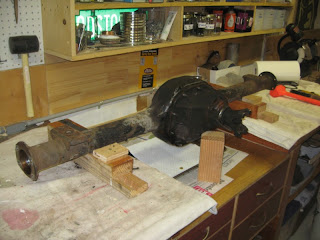 Eventually I got it apart, but it was still very difficult to remove the differential case. I ended up using a bunch of wooden wedges I made for a previous project to force the case apart from the housing. With a lot of wiggling, and even more mess, I eventually got it out. I'm not sure yet if I will be changing the differential, and keeping the case, or just buying a rebuilt third member. Oddly, the latter may turn out to be more cost effective unless I do the conversion myself...and that's not really an option. 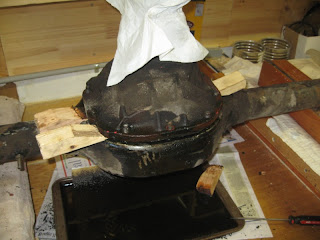 The edge of the housing was a bit messy, but otherwise it was in great shape with no serious rust issues. The gear oil was a thick black gunk, and stank out the garage. 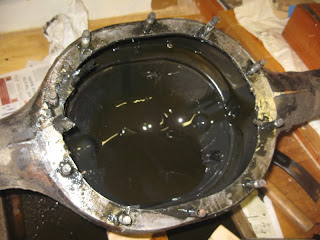 After tipping most of the oil out, I leaned the housing in the corner of the garage. You can't see it in the picture, but the bottom is standing inside a plastic coke bottle with the neck cut off. I left it overnight to drain out as much of the oil as possible. 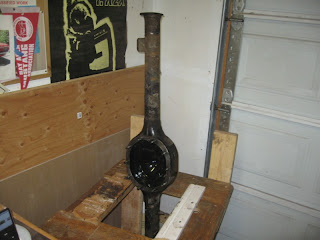 The oil seals looked like they were in good shape, but they cost like eight dollars each so it makes sense to replace them now. 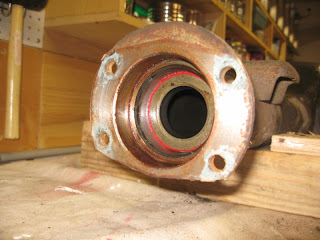 Here's the view after I pulled the seal with a slide hammer. 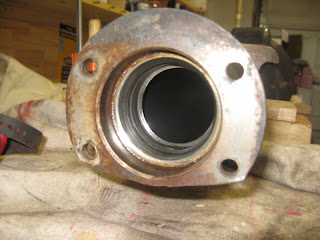 I had to destroy the seals to get them out - I mean I was never thinking they were going back, but I was surprised how much they got bent up. 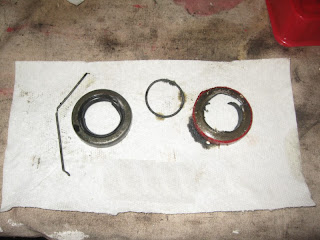 After wiping up a bit more oil that was hiding behind the seals, I got the wire wheel back out and gave the outside of the housing a good going over. I was expecting this to be tedious, but it was so much easier than working on my back under the car that I actually enjoyed it! The housing came out great. I removed the old gaskets from the end of the housing with a sharp razor blade and some 400 grit wet 'n' dry and they polished up nice. 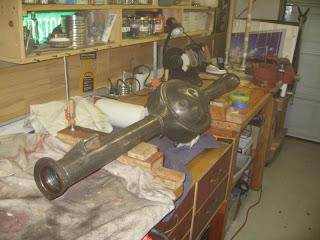 The mating surface also needed a little bit of massaging - several segments were scratched, probably by me I'm sad to say, but they all smoothed out OK with some very fine sand paper. I then washed down the entire housing with a warm solution of Marine Clean, and wiped down with shop towels. 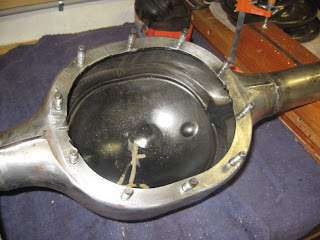 After drying, I gave the housing a coat of Metal Prep, which I left on for about 10 minutes or so, and then washed off with cold water. I dried the housing again first with a shop towel and then with compressed air until it was very dry. 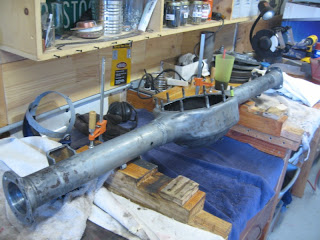 After an hour of extended drying time (I think they call it lunchtime in most places), I busted out the POR-15. I've been waiting to try this rust treatment/paint for ages, as I've heard so many conflicting stories about results. I actually ordered a quart of POR-15 direct from the manufacturer back in...like...April. I must have been feeling ambitious at the time. When I got it, the can was dented, and had dried black paint on the outside of the can and on the inner packaging....but the lid was on tight, and there was no mess around the lid. When I opened the can it was about 80% full. Thing is, the lid was sealed on so tight and clean, that it must have been shipped that way.

Now, I should have returned the POR-15, no question. But years of shopping on the internet have taught me nothing if not that returning faulty goods is a total pain and costs more money (return shipping) and time (waiting on the 'phone) than it's worth. You know, you call up, and you get in the call queue for returns....and you wait...and wait...and then you get some idiot in, like, India or somewhere, and then they tell you to contact the carrier....etc etc.....blah blah....I don't know if POR-15 are like this, as I never called them, but years of similar experiences have worn me down to the point where I don't even bother to try to return stuff anymore unless it cost over 100 dollars...I just don't have time. So the POR-15 went up on the shelf....

...and now, six months later I'm ready to give it a try on my axle housing. If you've not used POR-15 before, it is extremely sensitive to water. This means that if you get a drop of sweat in your can of paint, you may as well toss it - it's never going to stick or cure correctly. Even the water vapor that makes up 1% of the air is important: leave the POR-15 exposed too long and it will start to become more viscous. The manufacture recommends you remove only the amount you need from the can, and reseal immediately - in other words, don't paint straight from the can. I chose to observe and ignore this recommendation at the same time: I poured most of the paint into a new metal paint can - I get them at Kelly Moore for a few cents - and sealed it up. I left what I needed in the original beat up can and used a narrow foam brush to spread it on the housing. 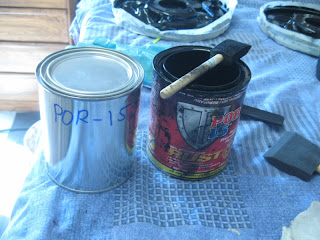 The POR-15 is self leveling, so there were hardly any "brush" strokes visible within a few minutes of applying the first coat. I gave it about three hours - the surface was touch dry by this time - and then foam brushed on a second coat. I then left the housing overnight to cure. Next day, well it looked OK. There is a speckly nature to the finish, like lots of tiny bubbles were in the paint (which there weren't as far as I could tell). It's not really good enough for anything that is going to show, but for the axle housing it is very adequate. The final look has a bright gloss; I know everyone seems to be into satin or flat black these days, but I actually like this look for the housing and brake backing plates, so I'm quite happy. I just need to snag a seal driver kit from somewhere, and then the housing can go on the "done" pile. Guess I'll find out in time if POR-15 does peel off....? 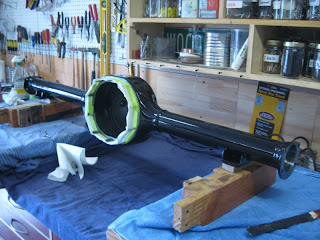