and now the windshield is gone

Removing the windshield has been an ongoing process which I finally completed the other night. I got the trim off a few weeks ago, but I only recently found somewhere to actually store the windshield (in the basement, since you asked). Getting the trim off around the window is a real chore, as has been well documented on VMF, but I was still keen to do it myself. When I was asking around for advice, one of the guys in BAMA told me to "get a glass guy to do it." After that I was determined to do it myself. 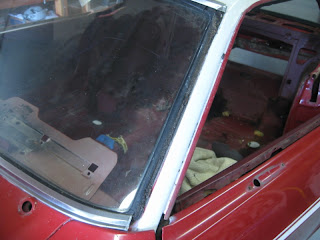 The primary resource for windshield removal is this film clip by Mark Stang. The only thing I can add is that if you don't have the molding removal tool shown in the film, then you can make one out of a paint can opener...it just takes a bit of time at the grinding wheel.


Once the trim was out of the way, I was shocked to discover just how much crud was underneath the molding...a lot of bits of dead leaves mixed with who knows what. I started by trying to scrape it out with a small piece of plastic. 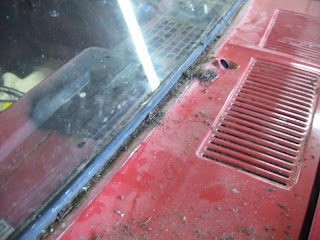 Pretty soon I had to stop and tape up the cowl vents - no point making more work for later... 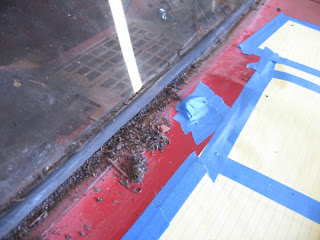 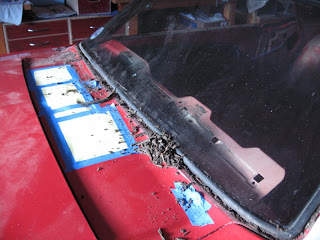 I've read a lot about using a piano wire to cut around the windshield gasket, but I couldn't really see the point - I just cut through the outer side of the gasket with the blade from a Stanley knife and then pushed out the glass from the inside. You have to work your way around the top edge and the sides of the windshield, pushing gently on the glass to break the seal; the screen should then lift out. 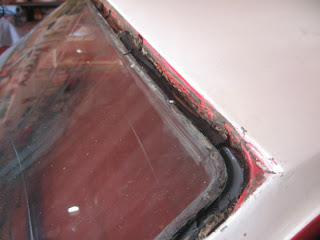 It's quite satisfying that I got the windshield out entirely on my own without breaking it, or even nearly breaking it. After all I've read, it was quite easy and I may even have a bash at putting the new glass back in. I am 99% certain I'm not putting the original glass back in as it has a couple of huge half dollar sized chips and several scratches from the wipers. I'm hoping to reuse the backlite as that is in much better shape. 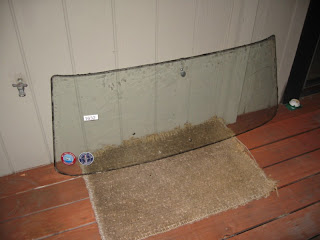 Inside the gasket is a load of sealant type gunk, which has to be scrapped out. I was stealing myself as I poked around the lower edge, as I expected to find rust in this area. Fortunately there wasn't any. Yay! 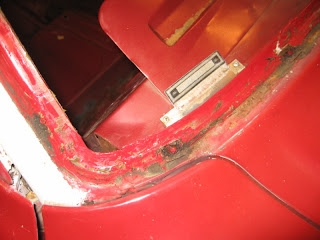 I was busy admiring the inside edge - a bit of peeling paint, but otherwise what looks like perfect metal underneath - when I noticed...a PHILLIPS SCREW holding in one of the trim clips!! Hello!! How did that get there...oh I see...of course, the windshield has been out before...Now lets get this straight: I have NO problem with this car having been well looked after and previously restored - far from it....but so much of it doesn't make sense..... 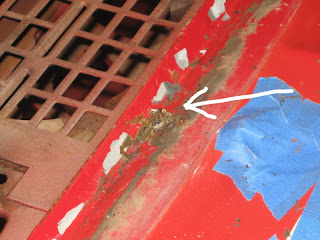