and now for something completely different...

I said that my last post had taken three years to accomplish, and since then....nothing! It's true. My shinny red 351W is sitting in exactly the same place it was the day the freeze plugs were installed. And here's why: I've been otherwise occupied with constructing my new workshop. It's at the back of the yard, so its not likely I'll ever be using it to work on the '68...but you never know.

A few months ahead of time we had a 12'x17' pad of crushed granite installed at the end of the yard. We laid down the foundation skids - five 16' lengths of 4"x4" pressure treated lumber - on top of the pad. Getting everything level took a bit of back and forth... 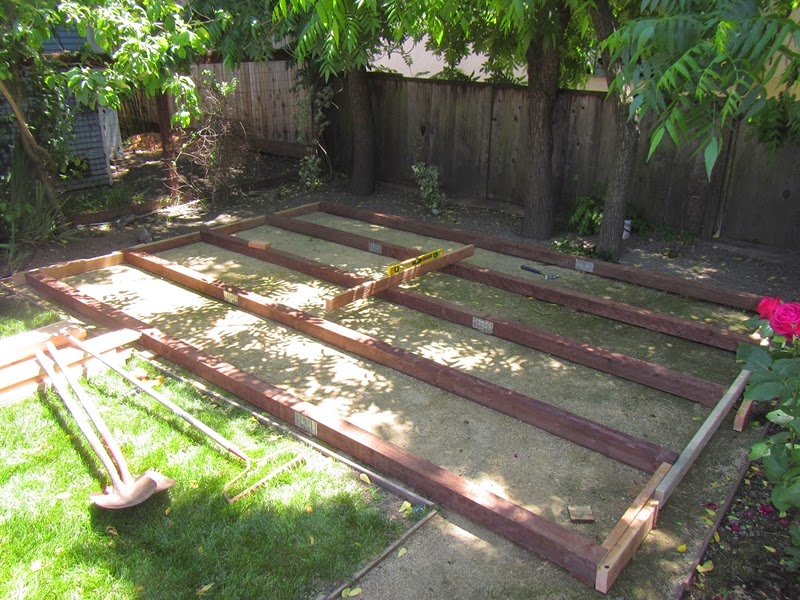 The floor joists were laid on top of the skids. We used 2"x6" doug fir for the floor joists and installed 3/4" plywood sheets on top to make the floor. This made a very sturdy platform for the shed. And that was it for the first weekend. 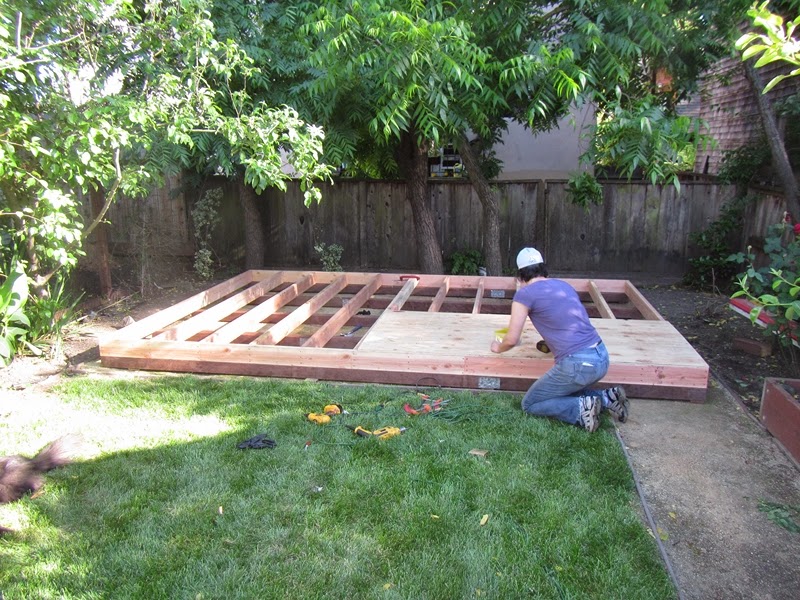 The front and rear walls were framed from 2"x 4" doug fir with OSB sheeting at the exterior. We built the walls on top the floor. I used a double top plate to ensure the structure is as robust as possible. 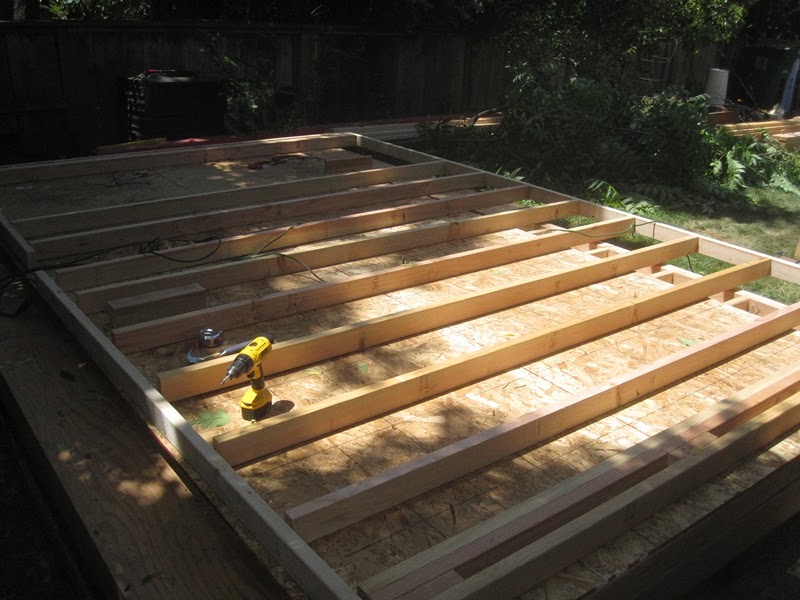 I would have liked to raise the walls exactly as they were built, but we could only manage to lift them in sections. 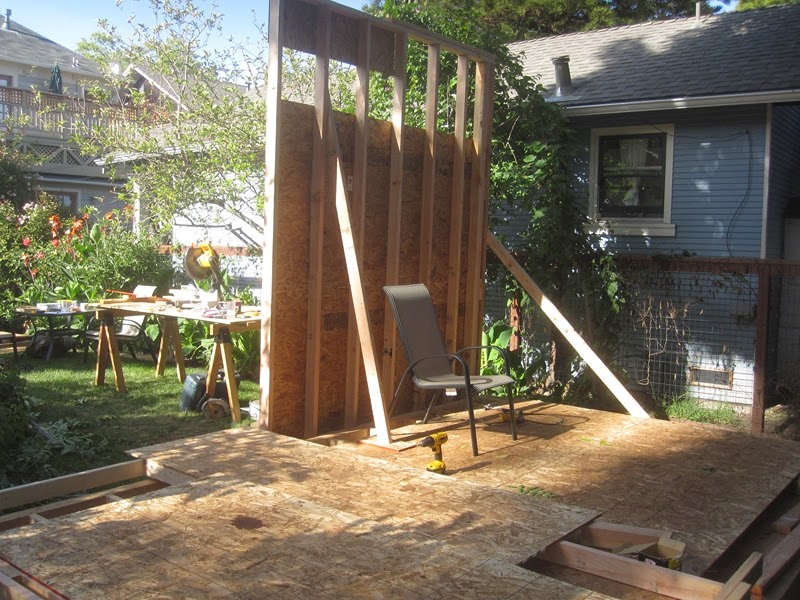 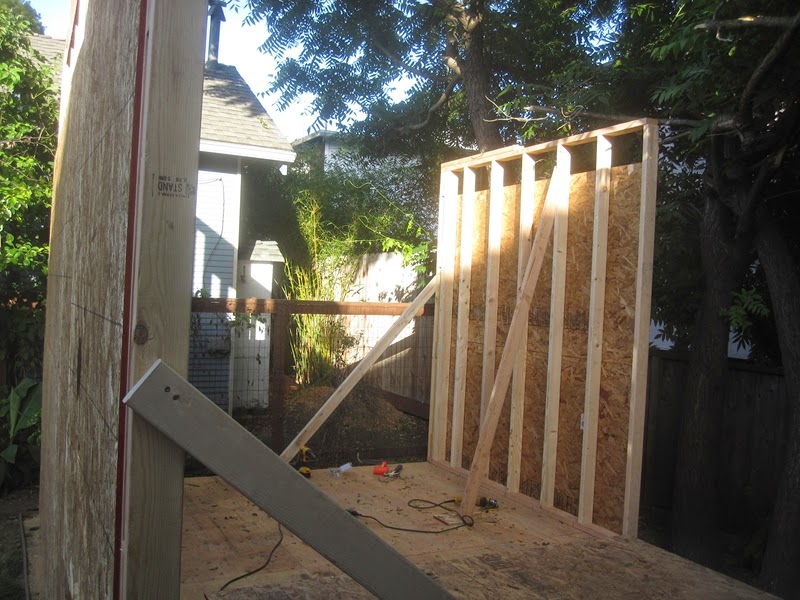 The framing for the side walls was added after the front and rear walls were erected. 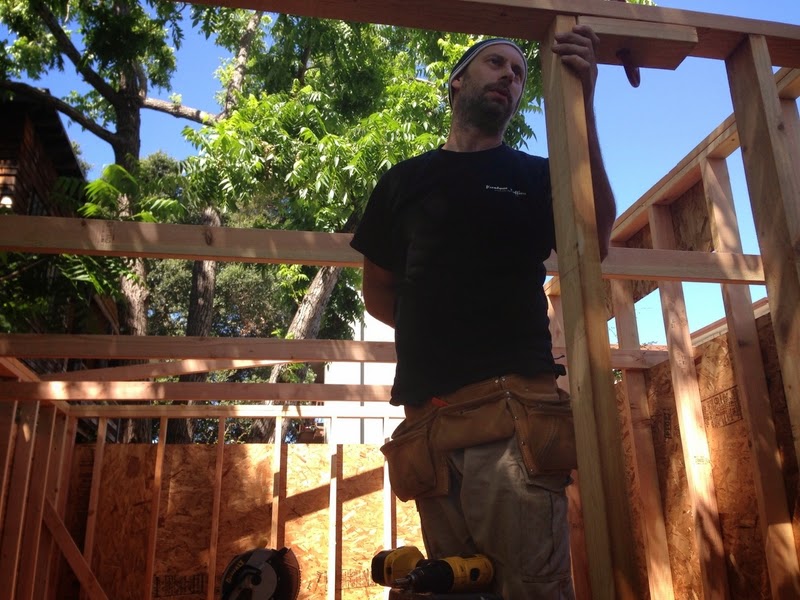 Installed the door and attached OSB sheeting around the opening. 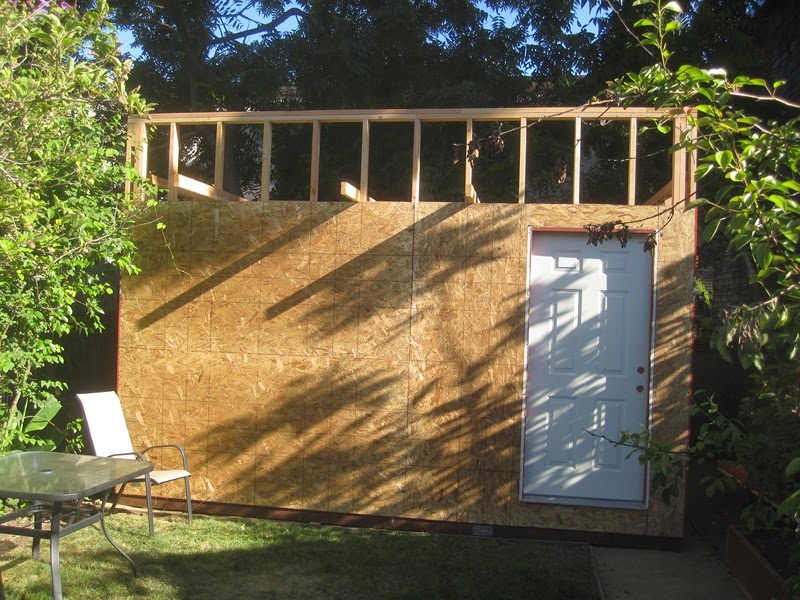 Several weekends in and it was time to make the rafters. I used some pipe clamps to hold the 12' sections of 2"x4" doug fir together so that they could all be cut at the same time. I cut the notches with a mixture of the circular saw and my router, and cleaned up with a very sharp chisel. 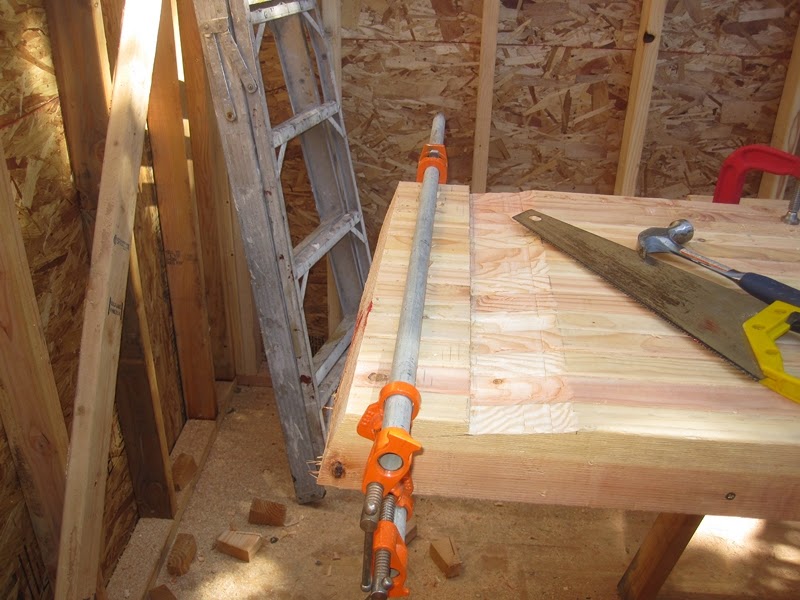 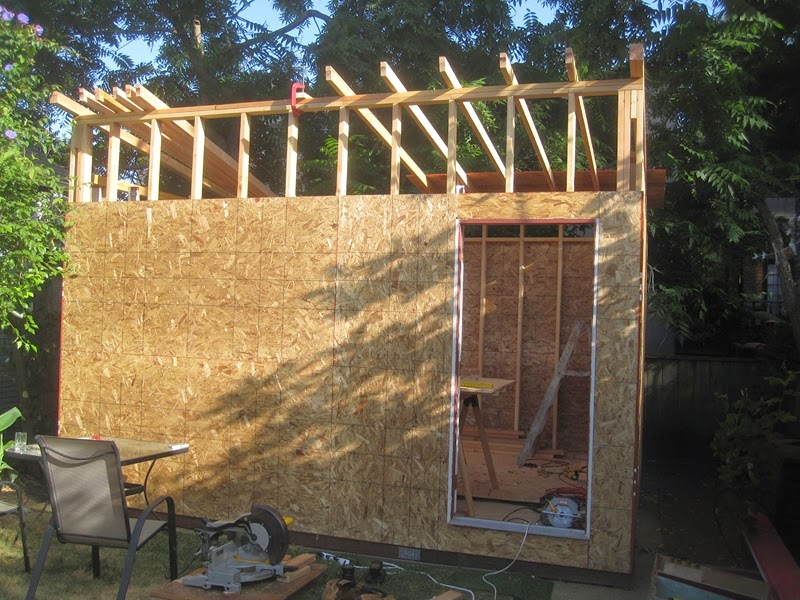 Added more OSB sheeting for the base of the roof... 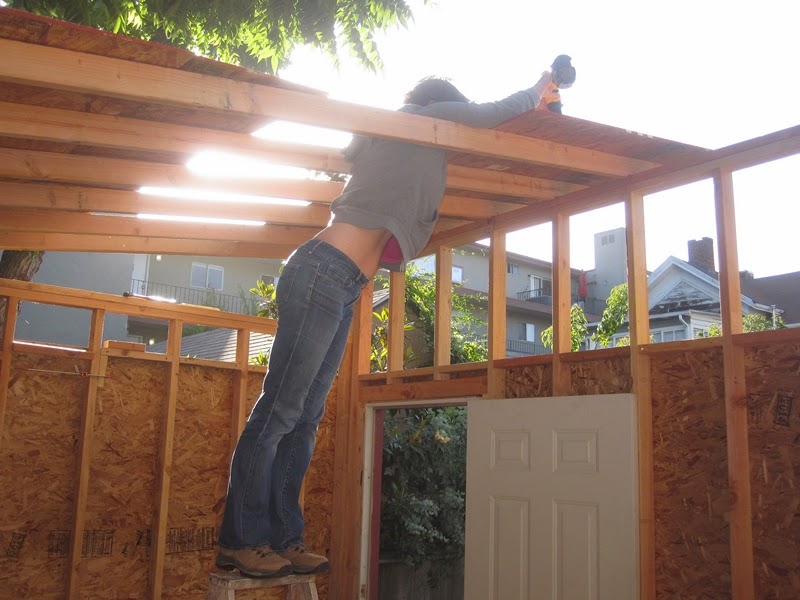 Framed out and sheeted the triangular sections at the top of both side walls and hung the door. 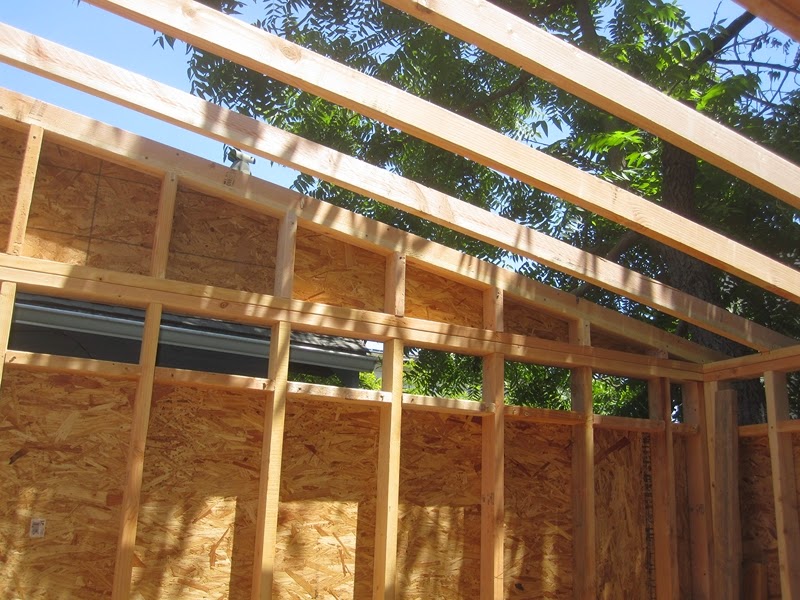 Starting to look like a shed....after about four solid weekends of work! 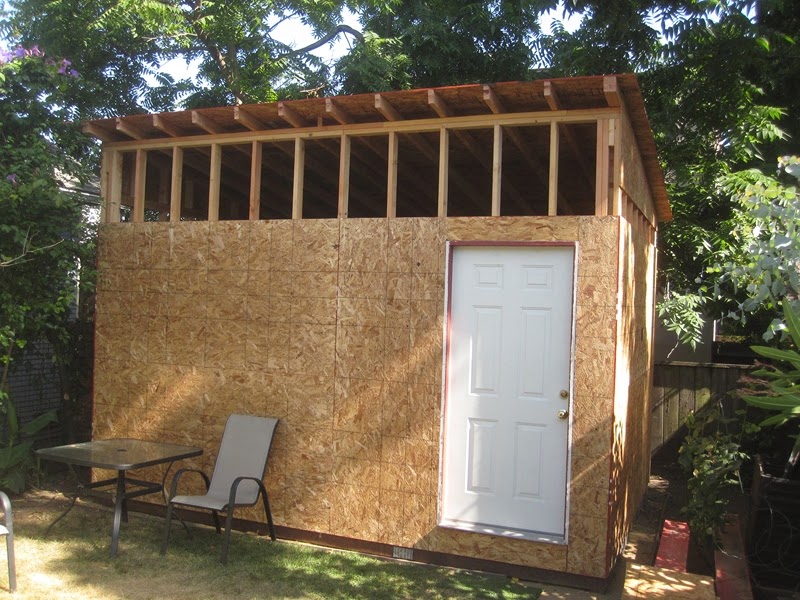 This is where it starts to get interesting. I'll be honest, I've built tons of stuff out of lumber before...but I'd never rolled on a roof. Well I have now. I used standard yard-wide rolls of roofing material and a huge bucket of tar. The three-knot brush they sell at home depot is crap I'm sad to say, but I made the best of it. 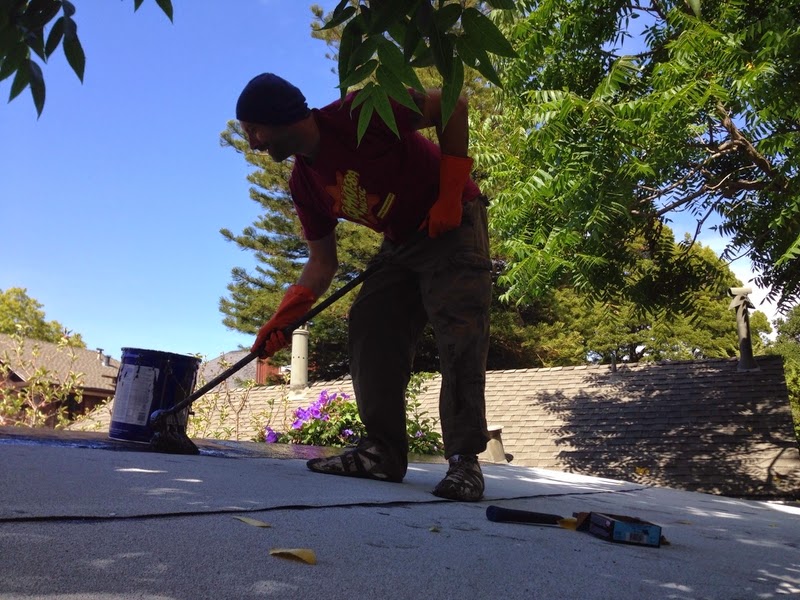 A few weeks (or was it months?) after the roof was installed, I trimmed the perimeter and installed the flashings. All exposed nailheads at the flashings were sealed with silicon. It wont win any prizes for neatness, but hopefully it will at least be water tight. If it ever rains in California again! 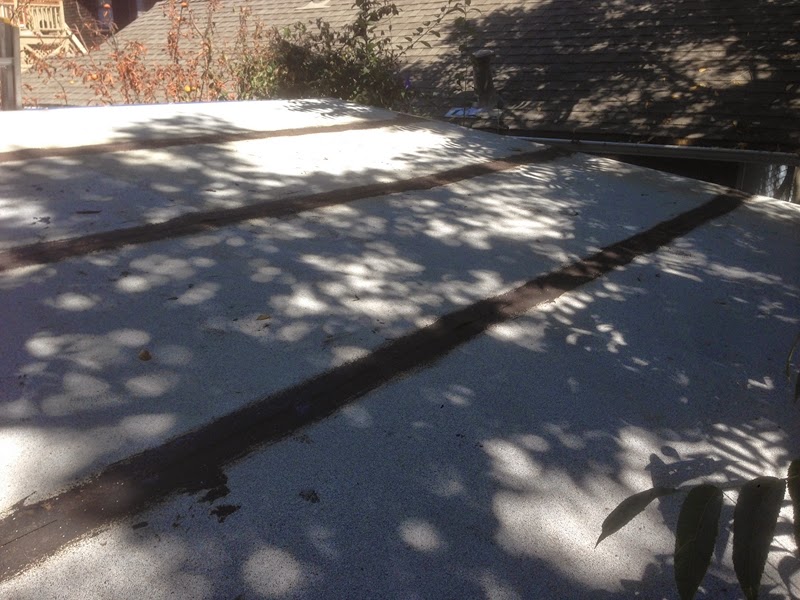 After the roof was on, we spent a while blocking out the underside of the roof and the interior walls. These are the un-sexy parts of the project that you have to do make the structure secure. 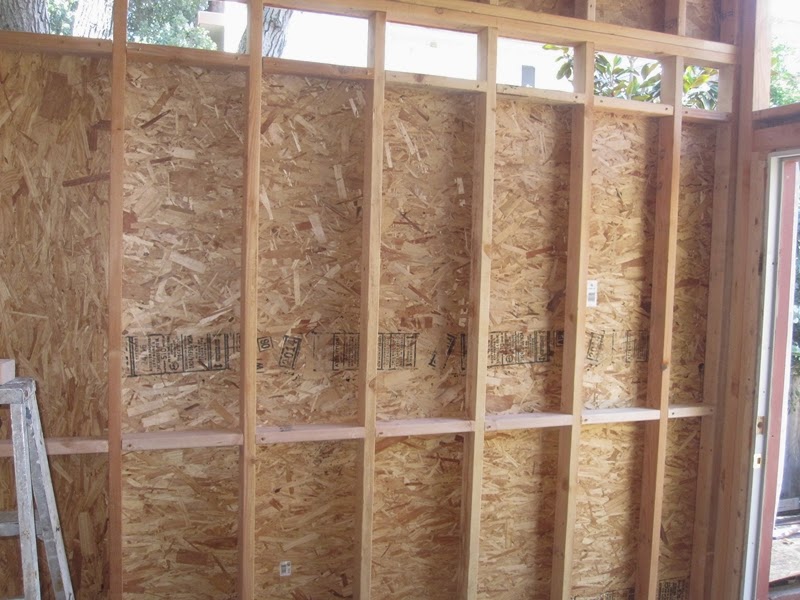 Installed the very latest in building wrap. I really like the idea of this material. To be frank, it's overkill for a regular a garden shed....but for my new workshop it's a case of no expense spared! 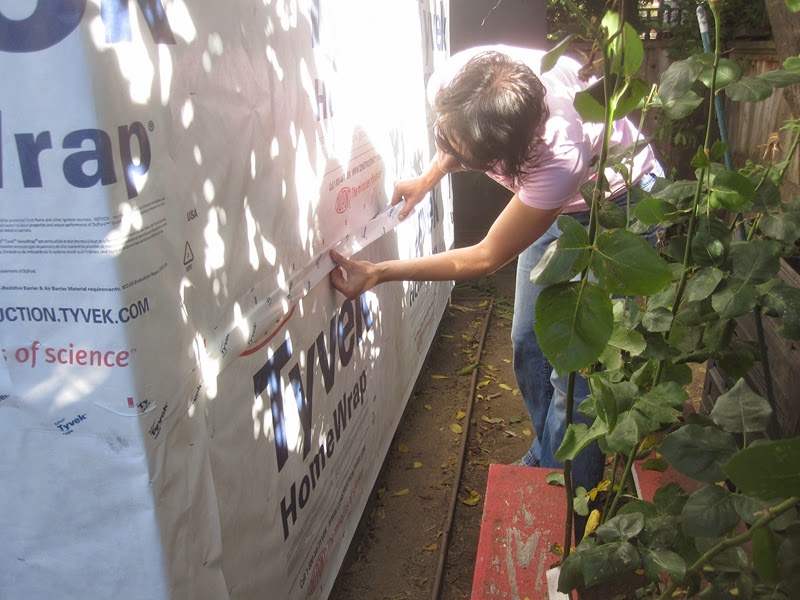 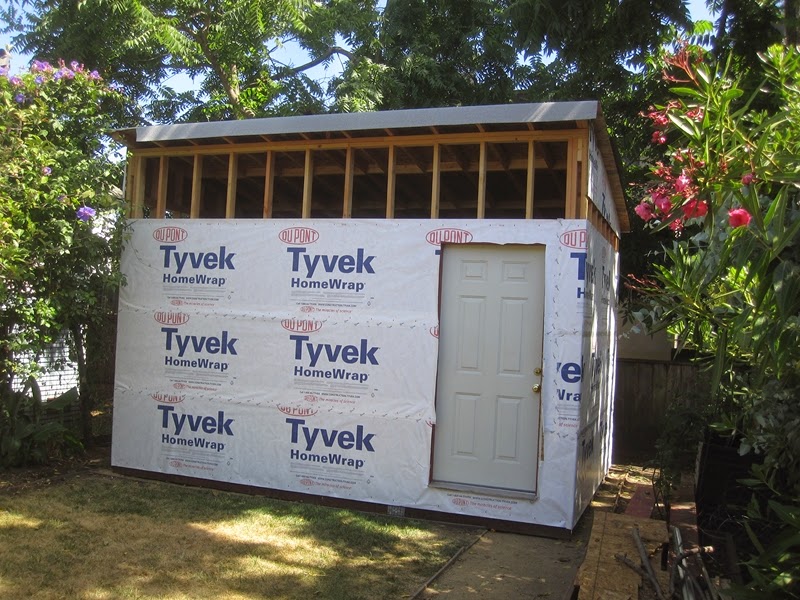 There was a hiatus of several weeks after the wrap was installed. Everyone has to have a vacation, right? And there was the annual trip to Reno for Hot August Nights. When work resumed, it was time to install the exterior sheeting. We used treated plywood at the sides and rear - these walls will hardly be seen after all. 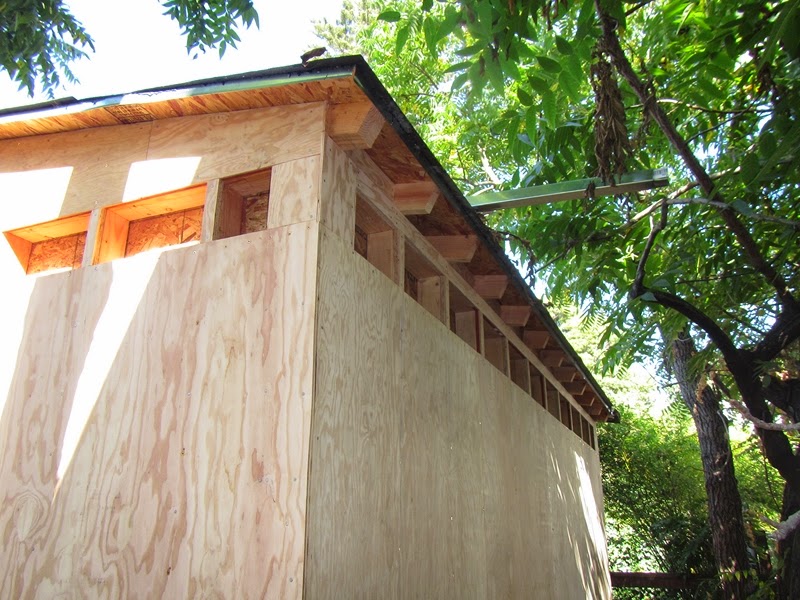 The front wall got some good quality ship-lap siding. I would have liked to put this on all four sides, but the price was prohibitive. 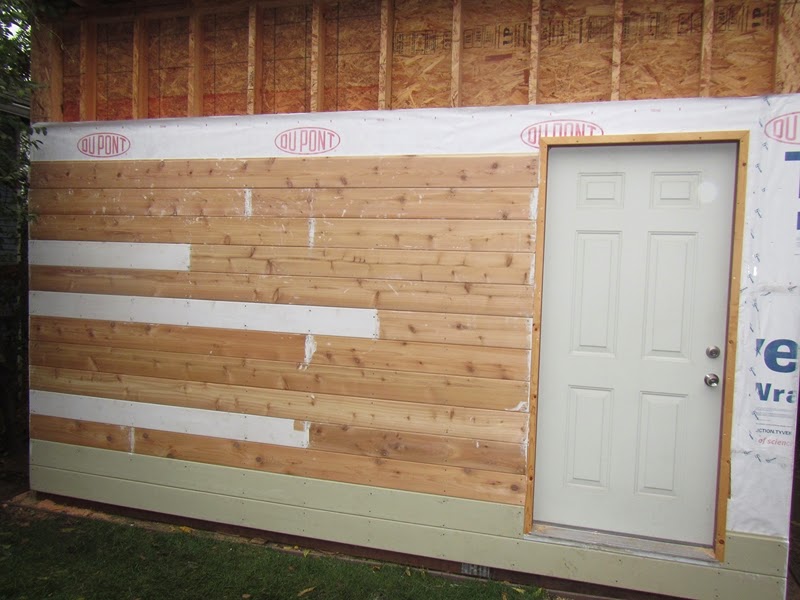 Installed the trim around what will eventually be transom windows at all four sides and primed the exterior. Then there was a phase of figuring out exactly what color paint to use. 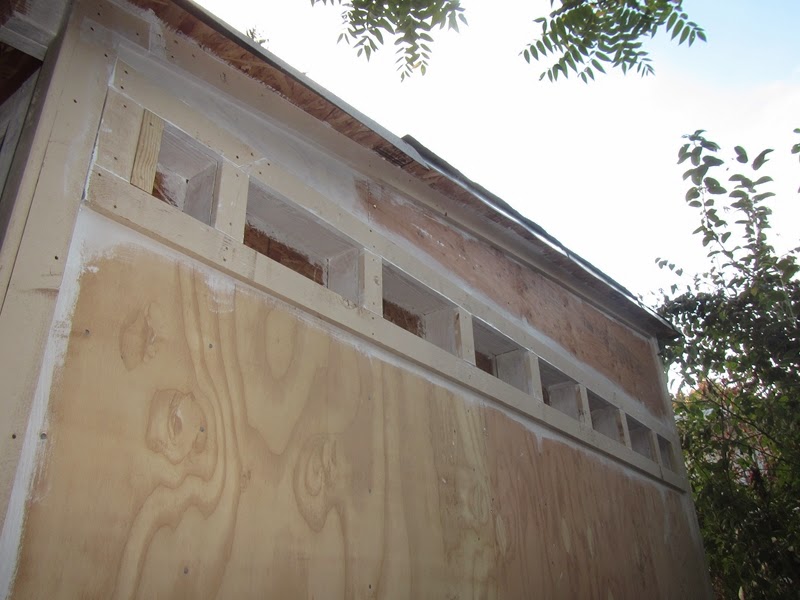 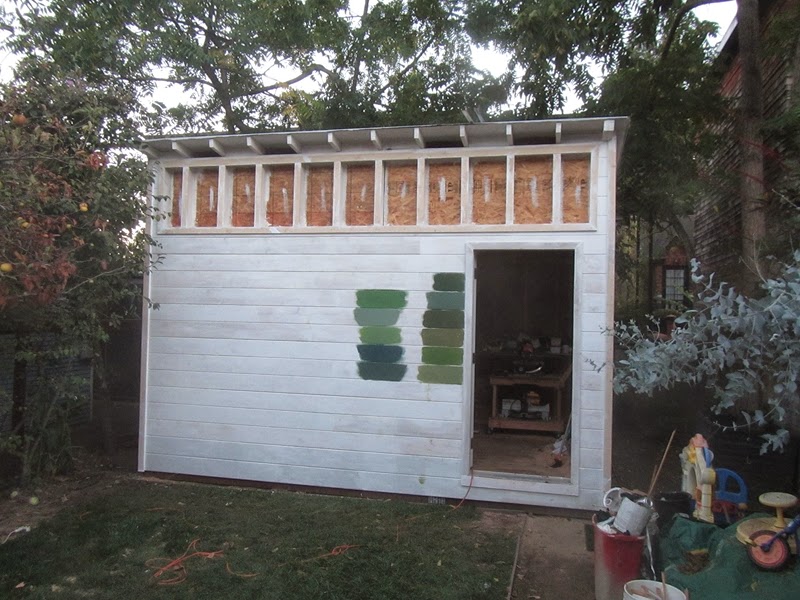 Decided on green with darker green on the trim and a complimentary blue hue for the door. 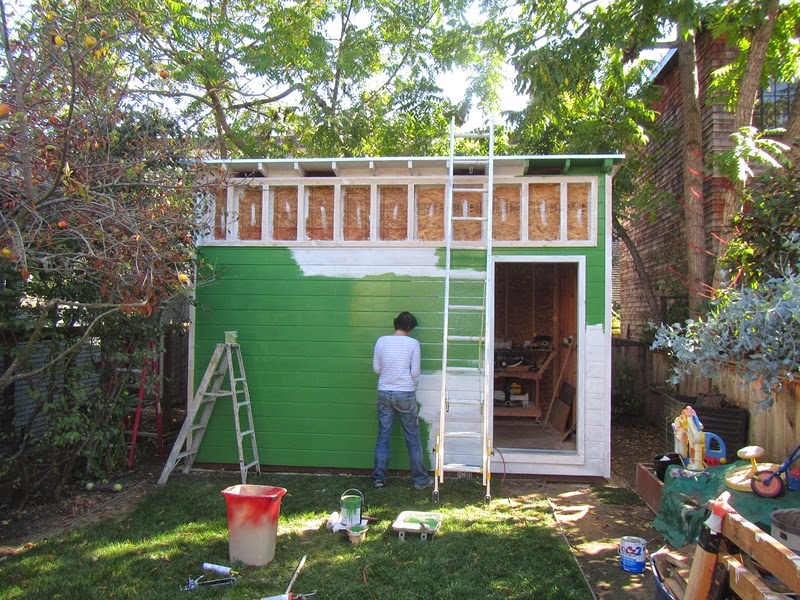 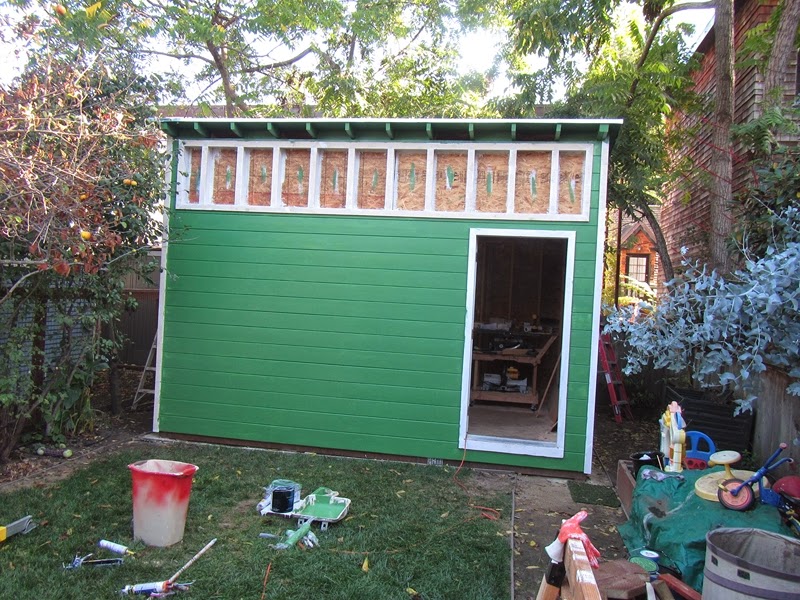 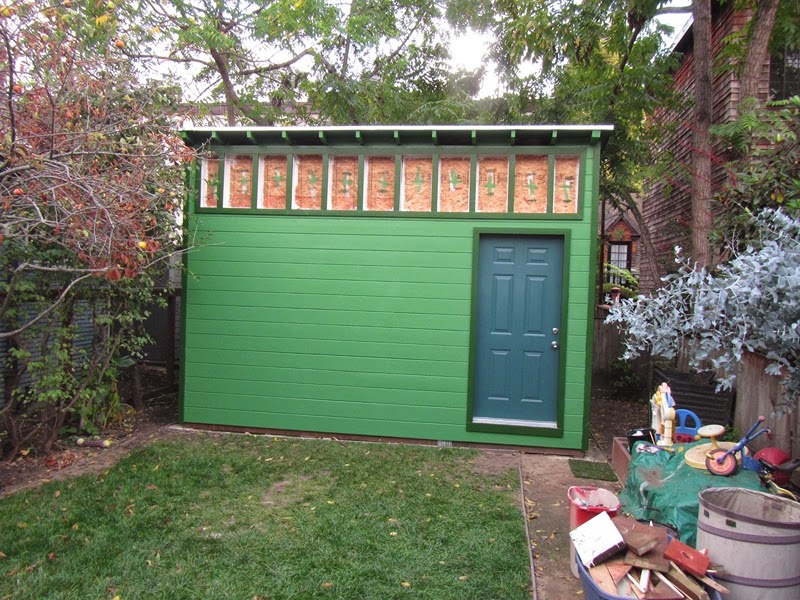 Finally somewhere to stall all the bikes!! I'll be installing the windows and bringing electricity to the shed.....in the Spring. 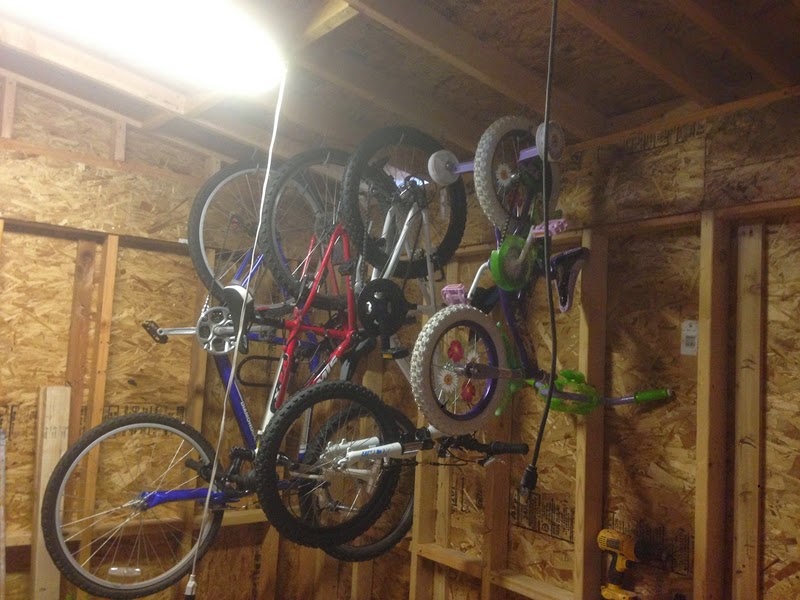 Email ThisBlogThis!Share to TwitterShare to FacebookShare to Pinterest
Labels: not the 68