So with the steering column complete and re-installed, there were just a few other things to put back before I could move the car. I kicked off by bolting the rear valance support brackets onto the back of the car and hanging the rear valance using the hardware I previously zinc plated. 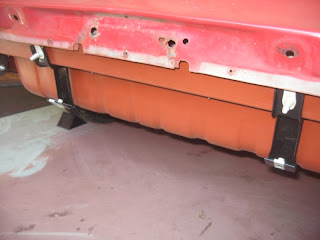 I put the rear seat side panels back in - it's a shame I didn't manage to get these panels painted at the same time as the rest of the maroon trim, but I just ran out of time. These are awkward objects to store, so it made sense to put back the three screws per side that hold them to the chassis. 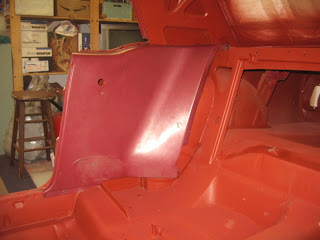 I didn't want my seats to scratch the brand new primer on the floor, so I cut some strips out of the old carpet and fitted them onto the seat tracks. 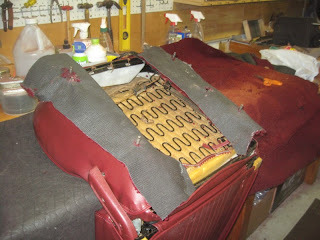 Then I bolted the front seats back into the car and added the steering wheel. 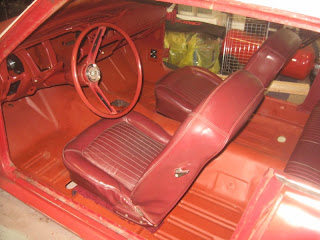 A multitude of parts were stashed in the trunk - mostly the big stuff I took off the car (dash pad, grille, export brace) and stuff I won't be needing again for ages like my Edelbrock Performer 289 intake manifold. 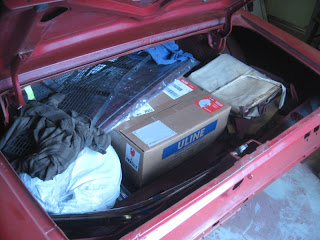 So now it's time to put the doors back on. I started by re-attaching the hinges to the A-pillars, using the newly painted and plated hardware. So far, so good.... 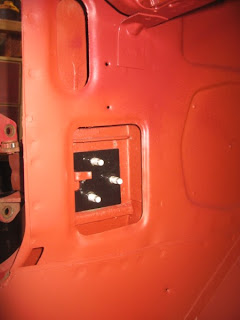 However, it quickly became apparent that getting the doors back on without first taking off the fender was going to be impossible, so off they came. Of course there was a ton of dirt, grit, rust, peeling paint, crud, you-name-it under the fenders, but I didn't have time to mess with it. I just took the fender off, bolted on the door, did the absolute minimum of alignment, and then put the fenders back on. 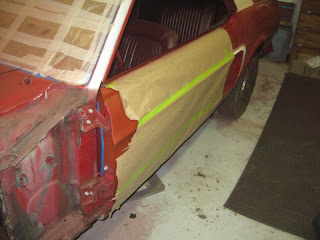 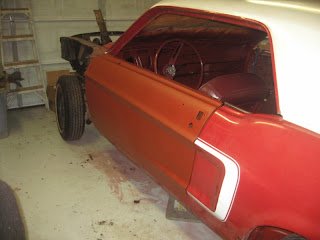 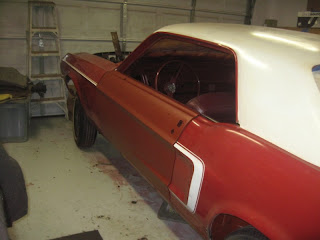 After I did both sides, Uncle John gave me a hand to re-attach the hood, and I was done. Now just need to pack up everything else in the garage and prepare for the big move.... 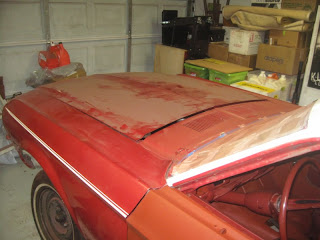