I wrote in my last post about working on the car in short bursts, and in lots of ways this has been a successful approach for this part of the project. One drawback though is that I never accomplish enough in a single session to warrant a new blog posting. Getting the rear axle and suspension out of the way was a big step forward, but there isn't usually that much to show for an hour's grinding. To keep track of progress I made a rough sketch of the underside of the car and colored in the various sections as I went along. I found this a great way of monitoring where I was up to, and it really helped me stay motivated. 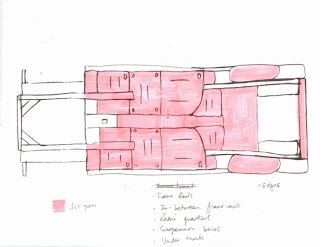 After the rear end was removed I continued working at the transition panel, concentrating on small sections and leaving anything I could not get at with a 4.5 inch knotted wire wheel for later. 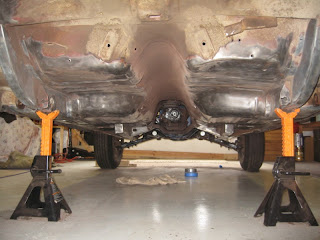 My modus operandi has been to chip away at each section by first going around the edge to define the area, and then working over any irregular areas like welded on brackets etc. 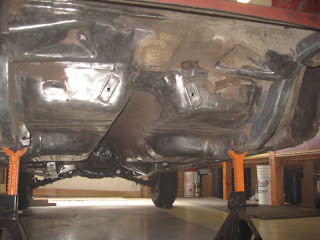 Eventually this leads to large patches of relatively flat metal which need to be cleaned up - I got a lot of the crud off this area by scrapping the body over with a plastic body filler spreader before attacking it with the wheel. 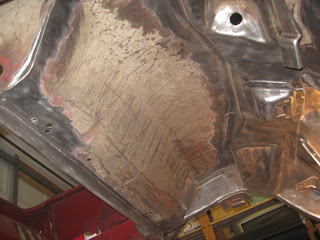 After chugging away for a good few sessions the transition panel came out rather well, even if I do say so myself. I have been lucky so far and have not found any rust - which is great! 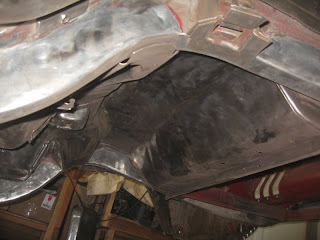 Then it was onto the transmission tunnel: 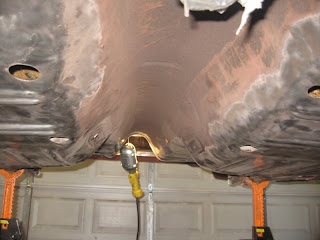 Again, I was able to get a lot of the surface muck off by scraping the entire area with a plastic body filler spreader and a wire brush - it would have made a lot more mess to go straight in with the wheel. 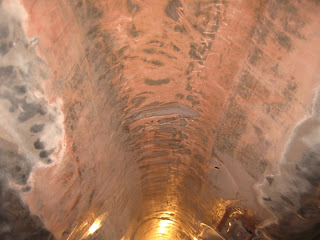 One more physical endurance session later and the tunnel was done as far as I could go with the transmission still in situ. I'm going to have to pull the motor and tranny out at some point, but not for a while, probably not before the rear of the car is a lot further advanced. When it comes to painting the underside, I'm  not worried about aesthetics - if it looks like it was painted in two parts, so be it. 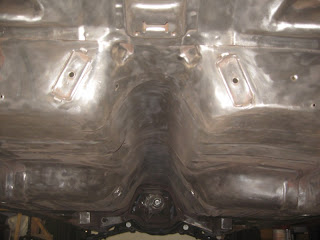 At the front of the floor pan I worked just past the edge of the toe boards - the rest of this area, the engine compartment, and the fenders, fender aprons etc will be tackled in cleanup phase two. This was the one area of the underside where I thought I might find some rust...but there wasn't any. There is one large hole on the passenger side where the after market ac drain hose was poked through the floor by some butcher. There is a smaller hole close by which looks like it might have been an earlier attempt to drill through the floor. The same PO or ac installer also butchered the firewall, but that is a story for another day...my intention is to patch and/or weld up these holes and several others at a later date. 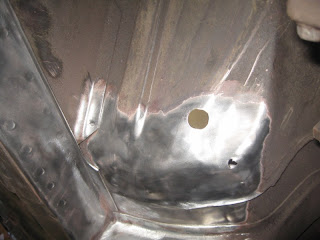 One place that was really tough to get at, even with a very small wire brush on my drill, was the area behind the front torque boxes. It is going to be tough to get every bit of surface rust out of this tight space - I'll just have to hit this bit extra hard with the zero rust later on. 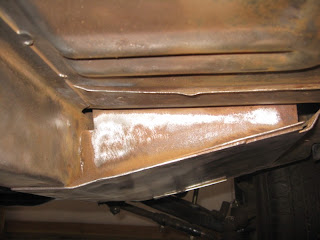 Another tough spot was the area behind the rear torque boxes - I left this bit until near the end because it was mostly obscured by the suspension. There was a medium covering of sound deadener in this area. 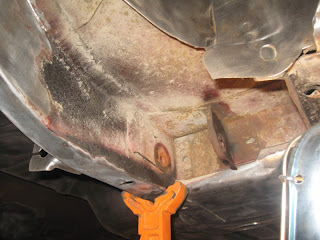 Cleaned it up as much as I could with the angle grinder. This is another area that needs to be hit with a smaller wire wheel in due course. 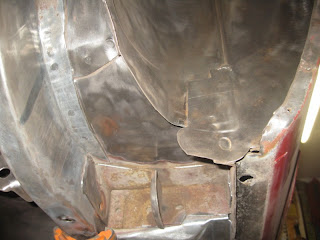 The only place where I encountered surface rust was at the frame rails and surrounding areas right at the back of the car. 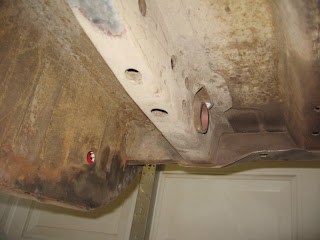 Cleaning up these areas was rather tedious, as there was very little room to work in and I had to mainly work with the edge of the wire wheel rather than the flat part. The passenger side came out pretty good with nothing more than surface rust to worry about. 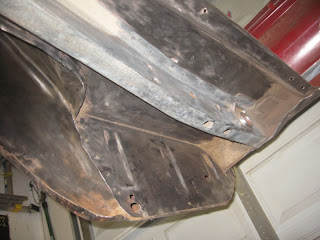 The driver side was more difficult because the gap between the frame rail and the lip at the edge of the gas tank opening is smaller at this side. I am going to have quite a bit of work to do here. 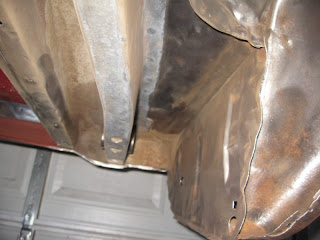 It was while I was finishing up that I found my first rust holes! There they are, in the bottom edge of the drivers side quarter. I actually remember my father drilling a hole in the equivalent position in his '73 Consul - at the time his trunk lid was leaking, and instead of trying to find the source, he just drilled an escape hole. I will be looking into an alternative solution for my car, probably involving a welder and some replacement steel... 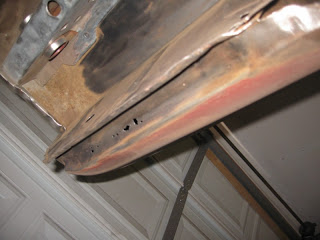 There is one other rust hole I know about, but since I've been aware of it since day one, I keep forgetting about it - maybe subconsciously I'm wishing it would disappear? This hole is just in front of the driver side rear wheel arch. It seems to just affect the outer skin; the wheel arch is solid at least....I'll be moving onto the interior next, so I guess I'll find out for sure then. 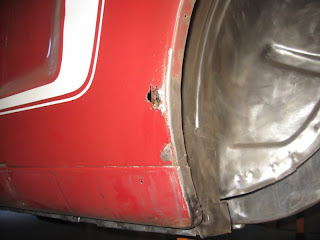