Cleaning the wheel wells was pretty grim all told. I ended up wearing so much protective gear that just getting into position was tough...and this was just the wheel wells! I found out the hard way that a pair of goggles over my eyes was not sufficient protection - the dust just gets everywhere. I wound up wearing a full face mask and goggles over my prescription glasses - yes, three layers of protection! This saved me from anymore eye problems, but it made it very difficult to actually see what I was doing...the solution was to use a very bright work light, and keep re-directing it onto the exact spot I was working on. I kept dropping the light or bashing it on something (under side of the car, jack stand etc..) which meant I went through a ton of light bulbs. Not very green, but then what exactly is green about a gas-guzzling pony car? I did try using a rechargeable LED work light, but it wasn't even close to bright enough. 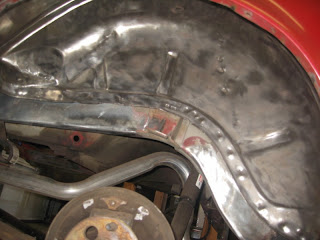 Onto the underside of the car: most of the underside was covered in a thick gunky residue - the legacy of driving 2000 miles through the desert with a major oil leak (note: this story will eventually be documented elsewhere on my blog, but the salient facts are that I drove the car a long way with leaking oil pan and valve cover gaskets - I was putting in a pint of oil every time I stopped for gas!). 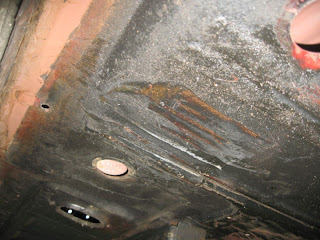 Like the wheel wells, the PO had sprayed part of the underside with black paint at some point, probably to tart up the car before it was sold to me. There was obviously no time to take off the fuel lines before the paint was applied: 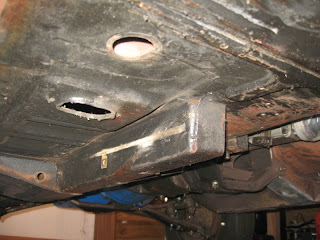 I attacked the underside with a wire brush and some shop towels, but this didn't really make much of an impression. 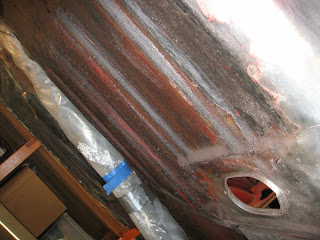 Wiping on lacquer thinner with a shop towel was more effective, and I got the worst of the oil and crud off the underside this way. The original red oxide primer was mostly intact underneath. 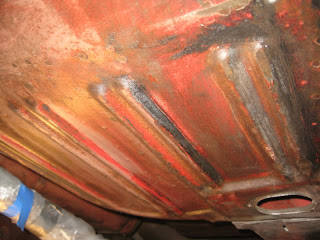 The wire brush worked better towards the rear where there was a lower ratio of oil to dirt. 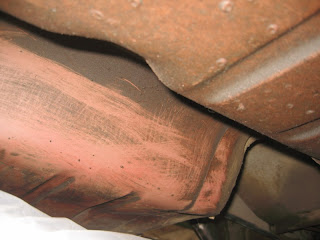 Several sessions into the underside cleanup and it became obvious that the exhaust was going to have to go sooner rather than later. I had been hesitant to remove the exhaust up to this point because it was going to require cutting the pipe somewhere in the middle to get it off the car. The fact is that reusing any parts from the exhaust is unlikely. To save it would have meant taking off the rear end and rear suspension, which I wasn't ready to do, so I just bit the bullet and broke out the cut-off wheel. 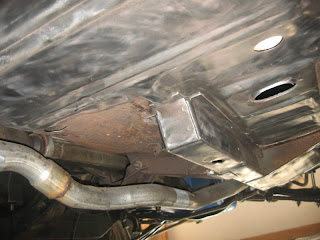 I wrapped the driveshaft up in polythene to keep it as clean as possible, and to deflect any stray contact with the wire wheel (that would be bad!), but the days before this gets taken out too are definitely numbered. 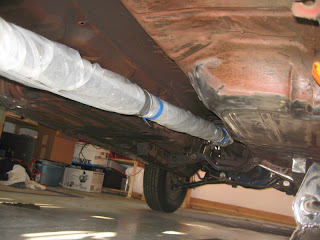 Really the only way to do this is to work on small sections. I started by going over an area pretty quickly to leave something like the picture below, where about 80% of the crud has been removed. 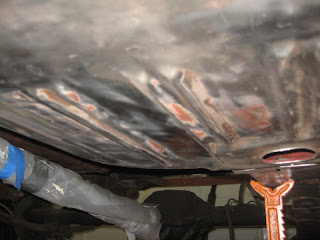 I then went back over the same patch more slowly, concentrating on specific ares until I had an approximately clear surface. There were some places that I just couldn't get to with a 4.5 inch wire wheel - I'm leaving these bits for later on when I can attack them with a more suitable sized implement, rather than constantly changing back and forth between different wheels. 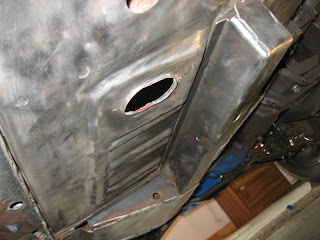 I have so far completed a "first pass" over most of the floor pan apart from the transmission tunnel. The more I do, the easier this part of the project becomes, but I can fully understand why most restorers look on this task as the most uncomfortable part of the process. Next time I'm definitely getting a lift! 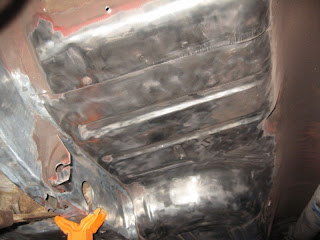