Progress has been a bit slow lately for a number of reasons. For one thing, I was waiting to remove the air conditioning unit until I researched how to do it properly. Everyone I asked for advice told me to leave the ac in the car and work around it...no one seemed to get that the thing is a late 70's aftermarket unit and doesn't add all that much value to the car...mainly because it is DOG UGLY! Honestly, it had to go! 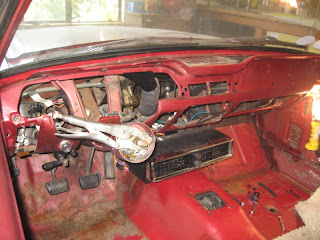 After taking in the advice on VMF, I had a guy come out and discharge the system for me, as I didn't really want to get busted for flooding the garage with CFC's. Sadly for me, the system was charged with R134, so I even had to pay $$$. Once that was done, it was a piece of cake to get the unit out. 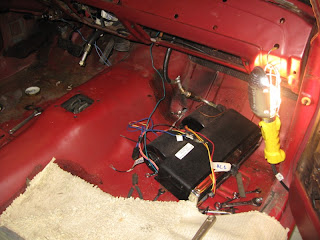 Next was the cooler - I was really glad to see the back of this. At last no more questions about my "aluminum radiator"! 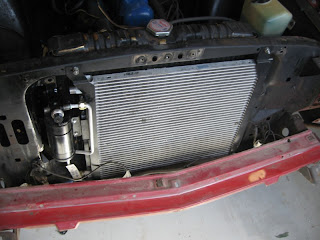 There were a TON of dead bugs entombed in the front of the radiator, including a couple of particularly gross specimens, which I decided not to post here...probably just as well. 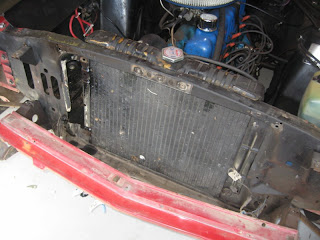 The next target was the heater, which is essentially held in by four bolts through the firewall, and a couple of other fasteners under the dash. 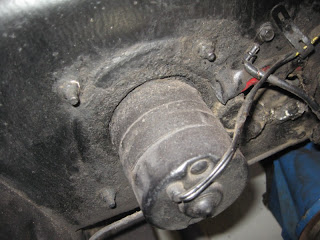 Once these bolts are out, it's a question of wiggling the unit a little bit to free it up, and then disconnecting the hoses (of course it goes without saying that I drained the radiator first). Then you have to undo the cables which connect the control levers on the left of the steering wheel. I suspect this is going to be a real PITA to put back later. 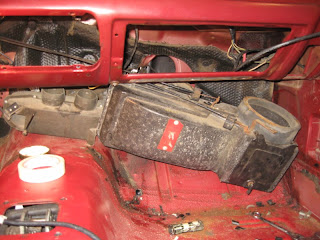 The heater unit housing was full of dead leaves! I guess it could have been worse; the whole thing was filthy inside and out. 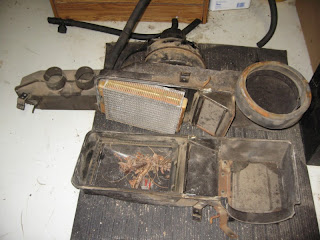 All the foam inside the heater has turned to dust - and fair enough after 40 odd years. All this will have to be replaced if/when the heater goes back in. 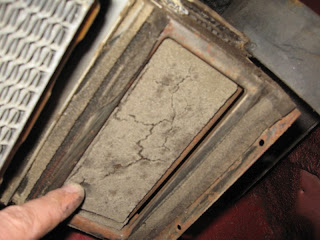 The area behind the dash really is starting to look bare now. I'm still hoping to complete the rest of the tear down before we leave for Indiana, but as I have only one more weekend, it may not all get done. 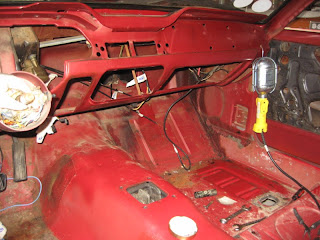