breakin' out the epoxy

Now onto the BIG ONE! If you've been following the refurb of the passenger compartment, (one, two, three, four) then you may have been wondering if it would ever be completed...well you're not the only one! The answer is that it now pretty much is. There was just one final thing to do before I could hit the dash and front area with epoxy...Zero Rust. The under-dash openings to the cowl were in excellent condition for a car of this age, even before I cleaned them up. The Mustang cowl is notorious for being rusted out, and is probably the most difficult portion of the car to repair due to Ford's "closed" design. In other words, I really lucked out with this car...again! 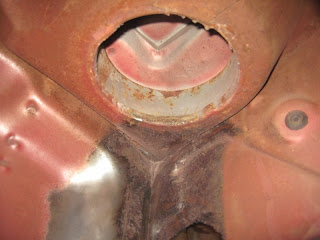 Still, I wanted to give the cowl a little extra bit of protection, so I applied some Zero Rust as far inside as I could get with a small foam brush. I'll be taking care of the rest of the cowl later on. 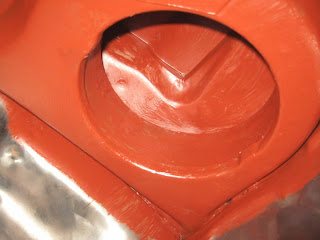 I also dealt with a few little bits of surface rust that I couldn't properly get at with the wire wheel - for example the recesses where the door hinges mount. I keep weighing up whether, if I could wave a magic wand and do this project again, I should have had the body shell sandblasted on day one, and saved myself a ton of rust removal work? I'm still not convinced either way.... 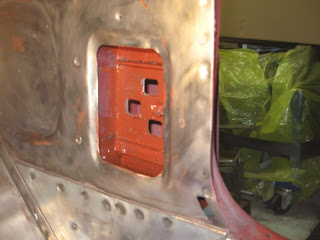 The Zero Rust had plenty of time to cure while I masked off the car.


I mixed up my usual PPG DP74LF red oxide 2:1 with DP401LF activator (I have not been using reducer on this project so far) and filled up the paint gun. I started under the dash and moved on to the front and around the windshield. After waiting about 40 minutes for the epoxy to flash, I went back over these areas and then moved on to the foot wells and seat platforms. After another 40 minute interlude the floor got hit again and then I taped off the "access hole" and left the car to dry. (Note: the flash time is usually more like 20 minutes, but it was about 55 F - a very cold day in other words - when I did the spraying). This is the result after the dust had settled, so to speak: 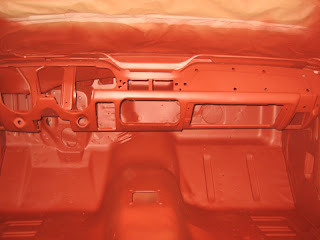 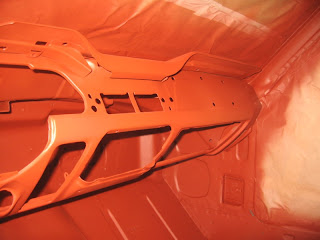 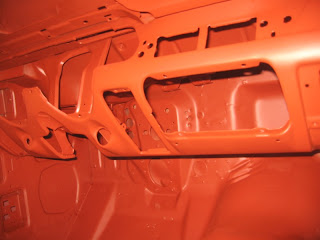 With the interior drying (and closed off) I moved on to the doors. First though, I had to make sure that absolutely every trace of aircraft stripper had been removed - it's easy to tell if you've painted epoxy over paint stripper, because the primer will never dry; it just remains a wet blob no matter how long you wait. After I stripped the doors I cleaned up with a soap solution, but in the interests of certainty, I did the it twice more - both doors were given a thorough wash down with a sponge and then dried with paper towels and compressed air. I paid particular attention to the edges where the door skin meets the interior panel and to the lower edge. When this was done I wiped down with a rag soaked in lacquer thinner and finished off with a tack cloth. 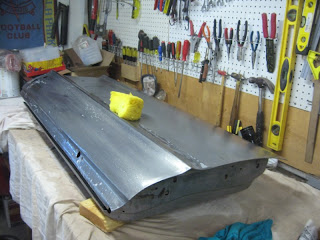 The next question was how to position the doors for paint. If I had an engine hoist, I'd probably use that to hang the doors, but since I don't (yet), I tried suspending the door from an A-frame I had in the shop. 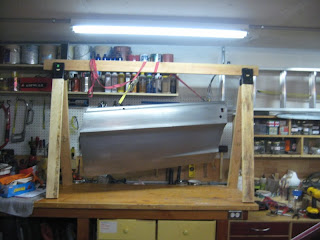 Unfortunately, this turned out to be too unstable, so in the end I just laid one door on top of my bench and put the other one on top of my tool cart. This worked OK, and I just had to be careful when turning the doors around. I masked off the interior side of the door before spraying the primer - I am doing my best to preserve the texture on the inside surfaces, so I won't be using epoxy in these areas. I tried to make sure that the edge where the paint changes color will be covered by the weatherstrip. 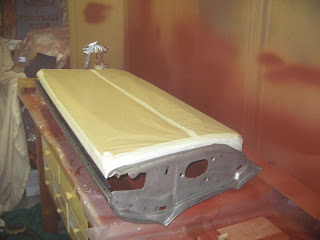 Each door got two coats, again with about 40 minutes flash time in between. 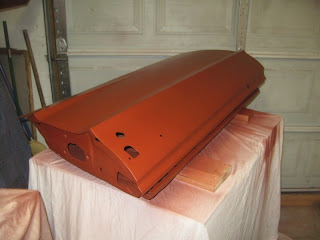 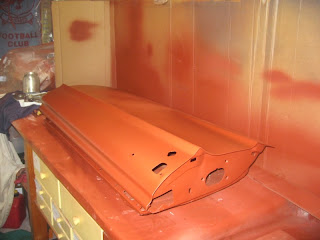 While I had the paint gun out I took the opportunity to put primer on the rear valance - the metal was prepped in the same way as the doors to ensure all the residue from the paint stripper was gone (I hope!) 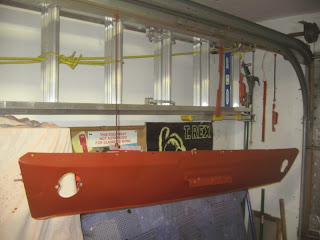