My 351W has been back from the machine shop since July last year. In other words it's been back almost as long as it was away. And, although I'm getting very close to the rebuild, it hasn't happened yet. Funny thing is, when I look back on 2013 as a whole, it was actually a very productive time for this project: much better than 2012 in fact. Twelve months ago I had just about organized an adequate work space at the rear of my tiny garage. 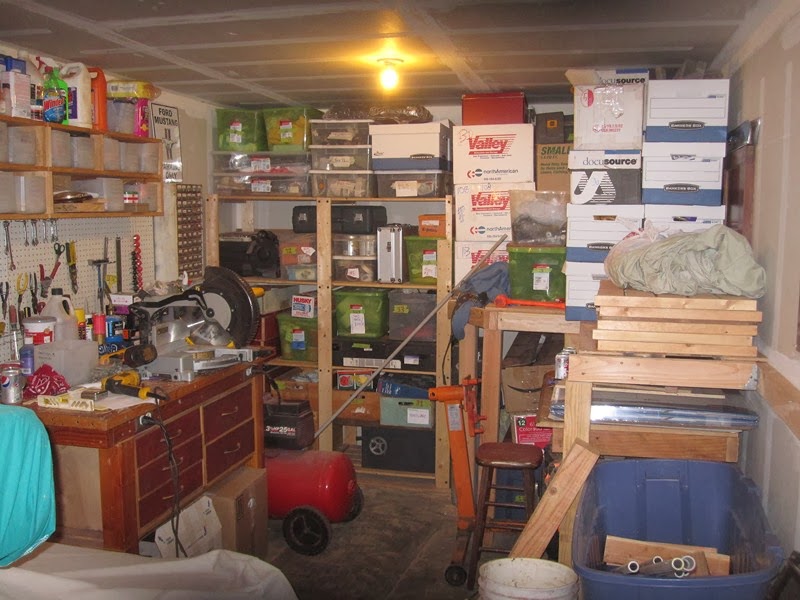 Since then I've re-installed a whole bunch of parts, thrown away a lot more, and in the process generated quite a few empty boxes. I've also acquired my dream toolbox and filled it with a bunch of very nice tools. It really feels like a worthy substitute for the two Marshall 4x12 speaker cabinets I never quite managed to own. When I set up the "shop" I maximized the space by rolling the car up against the vehicle door and positioning my workbench right in front of the car. I even took off the front bumper and the supporting struts to make a extra six inches of work space. This area has served me well. It's had too. But it does not provide sufficient access to the engine compartment for me to install the wiring harness, motor mounts and so-on that I want to complete before I put the drive-train back.


Fortunately I've emptied out enough old boxes that I had enough room to incorporate the toolboxes into my storage area, after a few modifications. This created some extra space, and I was able to shove the work bench about four feet away from the car, leaving myself a nice little work space. The next job is to put the motor back together and then get that Tremec box out from under the bench! 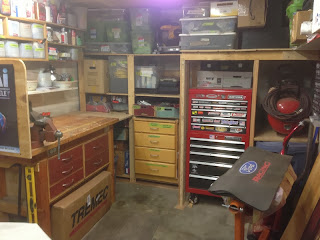