my block sanding vacation part one

One summer back in the midst of my youth I found myself working in a factory that manufactured wallpaper sample books. A good deal of this work consisted of sticking rectangular pieces of border paper on top of square pieces of wallpaper...by hand. It wasn't the most stimulating or fulfilling endeavor, to say the least, and as a result the area of the factory where folks toiled away at this onerous task - in fact just a large group of tables in the center of the building - was collectively known as "the patch"....on the basis that you had to be a cabbage* to work there!

Suffice to say, management were not overly keen on this phrase being bandied about, but it did tend to (cough..) crop up quite a lot, for example a co-worker might be heard to comment: "Tim was late again this morning, now he's stuck on the patch" or perhaps "that new guy is awful, he'll be on the patch before the end of the week" and so on. I was hardly ever late, and never misbehaved with the boss's daughter (his son was an only child!), so fortunately my exposure to life on the patch was minimal. Still, over the years, memories have occasionally flashed before my eyes, usually when I've found myself doing something mind numbingly boring....which brings me on to the real point of this post: block sanding.

I've been dreading the body-filler part of this project for a number of reasons, not least because just one quarter panel was enough to stop the Restoration King in his tracks...but eventually the time came when there was nothing for it but to take the plunge. I started out by investing in a set of Durablocks™ and some rolls of self-adhesive sandpaper in various grades and I tapped into my friend Chuck for some advice on technique before I got started. 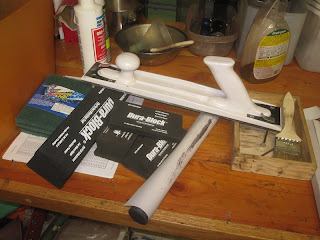 I also did some reading up on what type of body filler to use - my only experience of using filler prior to this project was when I helped my father plaster it over his Consul sometime in the early 80s....we even used some chicken wire too I recall.  This time I chose to go with Evercoat's Rage Extreme, based amongst other things on this review. 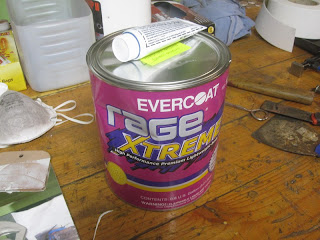 But, hold on, before I actually got started I had to battle though a severe bout of can't-be-bothered-with-this-project-ever-again-itis. Then, after a week or so of being entirely consumed by this illness, I noticed some very small rust spots forming on the car bodywork (!) which was exactly what I needed to spur me into immediate action! In fact the turnaround from lack of interest to desperation was so rapid that I booked two days off work next to the weekend, and vowed to have the car in primer by the end of day four. To start with, here's a picture of the filler being mixed - every bodywork blog I've ever read has a version of this picture, so I had to include my own. I found a huge box of mirror tiles in my garage when I moved in and I found they make excellent filler-mixing surfaces. 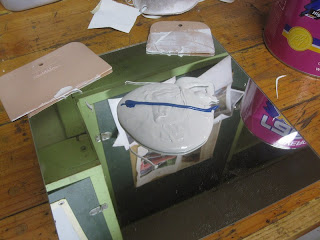 The worst damage was at the driver side quarter panel, so that's where I began: 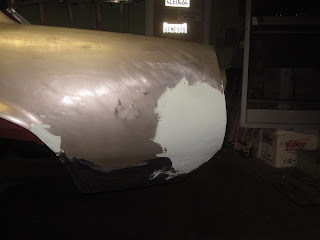 The first footprint in the dust. By the time I was done sanding, there was dust everywhere in the garage, but I was careful to keep it out of the house! 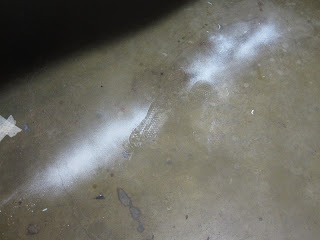 My basic methodology was to apply the filler, give it 20 minutes to harden, and then attack it with my seventeen inch long board and some 80 grit sand paper...and then repeat the process. For the first few cycles I was mainly concerned with knocking down the high spots in the body work, but eventually, thanks to my favorite BFH I came out the winner. Here's the car at the end of the first day with one quarter panel well on the way. 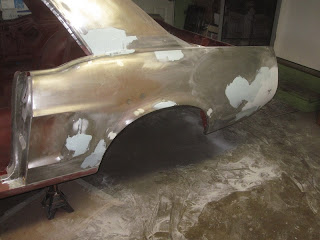 Day two and time to move onto the roof and A-pillars: 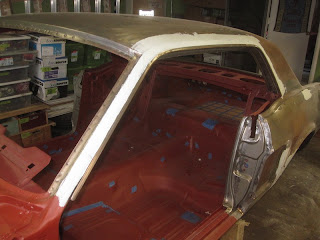 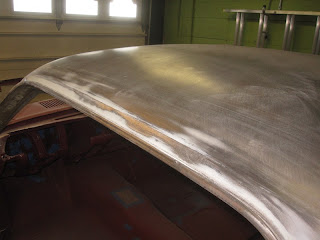 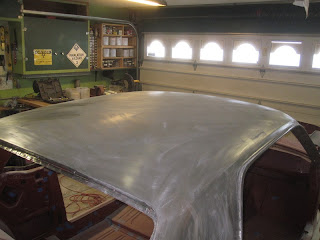 I was still struggling with boredom, but after a day and a half I had refined my technique such that I was applying less filler each time and doing less sanding on each iteration...after the roof was taken care of I moved onto the passenger rear quarter and the then the tail light panel. 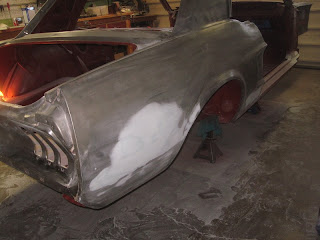 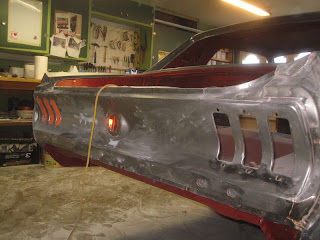 The funny thing is, the more time and effort I put in, the more I wanted a great result...but you have to stop somewhere, and anyway I'll be doing a lot more filling and sanding after the first coat of epoxy, so I didn't beat myself up too much over getting it absolutely perfect. Essentially I worked on getting it as good as I could by the end of day two, and then to wrap up I gave the entire car a light going over with 120 grit and called it done. Coming in part two: clean up and paint....so stay tuned. 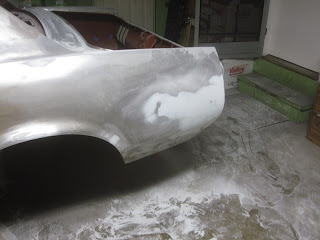 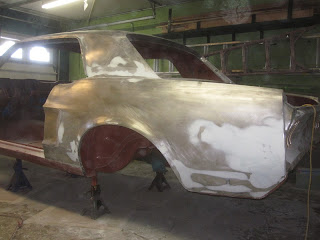 *cab·bage [kab-ij], noun,
1. Any of several cultivated varieties of a plant, Brassica oleracea capitata, of the mustard family, having a short stem and leaves formed into a compact, edible head.
2. (Chiefly British Informal) (a) a stupid, dull, or spiritless person (b) a mentally impaired person who is unable to live independently; vegetable.
Posted by Papa Sheep at 1:04 PM