Let's face it, vintage Mustangs are a tight fit if you're a big guy (or a big girl for that matter!). I'm a couple of inches over six foot, and while the car is fine for short journeys, I can remember only too well how I felt after squeezing my body into the driver's seat for a solid four days after I picked it up in the mid-west. So how to make the car more comfortable? Well, discounting the option of abandoning my project and restoring a different car (!), the only way to make more room for the driver is to move the seats. Sounds simple doesn't it. If you read the "how-to" article on the Mustang's Plus website, then you could be forgiven for thinking it really is a piece of cake...I guess for me it was a little bit more difficult, which is why I'm writing this blog posting instead of just linking to the MP article.

The basic concept is that you remove the seat platform, reduce the height by re-folding the front and rear edges closer to the top of the platform, and then weld the structure back in. Of course it goes without saying that you cannot discard the seat platform completely, as it provides important structural support to the floor of the car - think of it as a large torque box linking the inner rocker panel to the transmission tunnel and the floor.


I guess I've never been really sure how much of the floor of my car is original - I mean on the one hand it has the factory production codes stamped (mostly) in the right places, but then on the other it is in really great condition with hardly any rust anywhere. Don't get me wrong, I'm not complaining, it just seems too good to be true. Also, as I've been working my way around the car I've found tons of evidence that the car has been taken apart and "restored" in the past: the original motor is long gone, the passenger door came from a springtime yellow car, the paint job is far from original, and so it goes on...until I took a closer look at the seat platform. While the platform is spot welded to the floor and to the inner rocker panel, the welding at the transmission tunnel is a series of stitch welds. I don't know if this is how it was put together at the factory; it's a difficult place to get to with a spot welder, so maybe it was...except on the passenger side the welding was a bit more amateurish than what I would expect from the assembly plant - there was even a hole in the tunnel where one of the welds burned through. Still, it hardly matters, since I'm going to be cutting out the seat platforms anyway.

I started by scraping off the seam sealer and grinding off as much of the stitch welds as I could get to with a 40 grit sanding disc. I was trying my best not to damage the floor/tunnel, and the seat pan, so I stopped grinding before I got rid of all the welds and finished them off with a hammer and an old woodworking chisel (be careful if you're going to do this!).

Next I broke out my new spot weld cutter and drilled out the welds at the inner rocker panel. Apart from breaking some teeth off the first cutter - fortunately I bought plenty of spares - this was straight forward. I was being extra careful to only drill through the top layer of metal, and I (mostly) achieved this by taking my time, drilling to a shallower depth that I thought I needed, and then prying at the seat pan with a putty knife until it came loose. I managed to get the welds cut without damaging the inner rocker panel which was a huge victory. 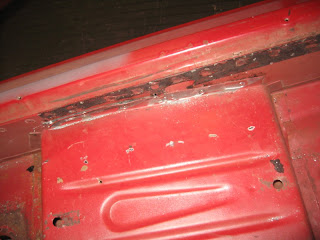 OK, so now it's time to free the platform from the floor at the front and back. Obviously this could be achieved by drilling out all the spot welds, but it is much better to cut the pan out just above the fold in the lower edge, leaving the welded strip in place. This method is superior because:
Ideally the cuts would be made with an oxyacetylene torch, or better still, with a plasma cutter, but I don't have either in my workshop so I used a four inch cutting wheel on my angle grinder. Not the neatest cut, and I couldn't get right into the corners, so I had to use a hacksaw blade to finish up, but it got the job done. 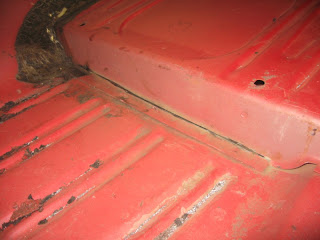 After I cut both front and rear edges I was expecting the platform to just lift out...but something was stopping it... 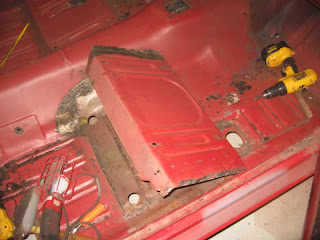 It turns out there is a supporting beam underneath the pan which was still welded to the floor. This piece was missing from the seat platforms shown in the MP how-to article, so I wasn't expecting to find it! I couldn't get at it with the cutting wheel, so I used the hacksaw blade to dispense with the support member - this was just as tough to do as it looks... 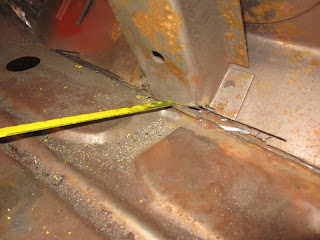 ...but finally the seat platform was out, and, apart from some light surface rust on the underside it was in great condition.The only over-spray on the underside came from my paint gun when I primed under the car, so this was another pointer towards non-originality. 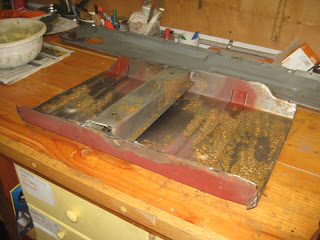 The newly exposed area of the floor was in good shape too, and I managed the removal without causing any serious damage to the floor or the inner rocker panel. 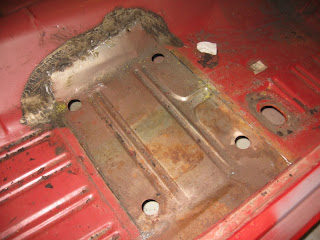 The cuts I made weren't particularly neat, but it was much easier to get close in with the cutting wheel and clean up after the seat platform was gone. 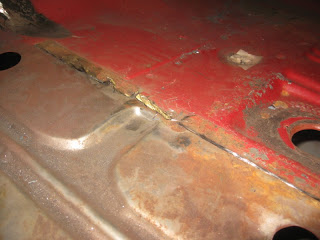 Next I gave the entire area a good going over with my faithful wire wheel. I'll be sealing most of the exposed metal before the seat platform gets welded back in. 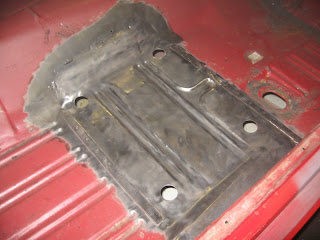 Before I could start modifying the seat platform I had to get rid of the unexpected crossbeam, which I achieved by drilling out another six spot welds. Later I'll have to figure out how to modify or replace it so that I don't lose too much strength in the seat pan. 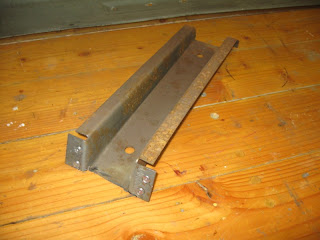 I was a little bit unsure about where to take my measurements on the removed platform, so I hit on the idea of using the driver side platform which was still in the car. I used some pieces of masking tape to mark the edges of the platfom front and back... 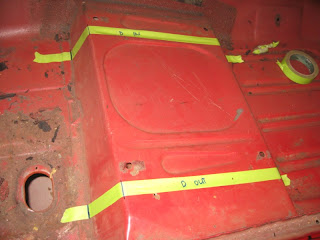 Then I transferred the tape to the other platform. 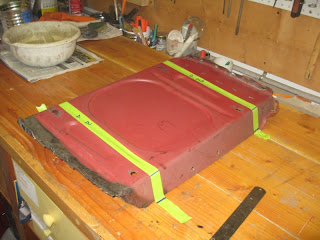 Starting at the front edge, I measured 1.5 inches from the marks and drew a line across the platform for the new fold. An extra 1.5 inches of room in the legs-to-steering-wheel area is more than it sounds, and is really the maximum distance you can move the seat platform with getting into serious modifications (more on this later). Also, anything less than this, and it's probably not worth going to all the trouble. 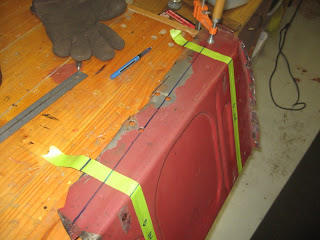 I then clamped a piece of scrap angle iron to the seat pan... 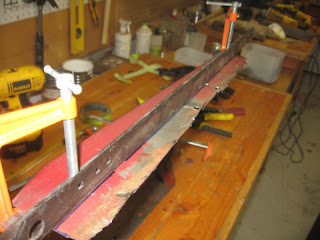 ...and made my new fold by smacking the pan with a body hammer - this was quite easy to do, especially after I put in some ear plugs. 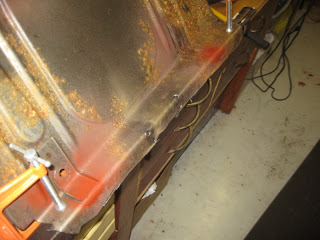 I neatened up the edge by using a strip of masking tape as a guide and taking off the excess metal with the cutting wheel. 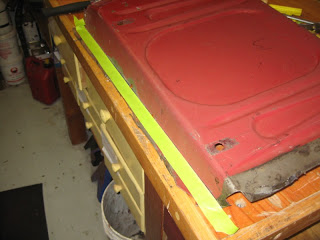 The rear of the platform was a bit more difficult, because I wanted to make my new fold below the edges of the inner support brackets.


I got round this but drilling out the spot welds between the brackets and the sheet metal, and then making my new fold. Then, using another piece of masking tape as a guide, I chopped off the protruding part of the bracket with the cutting wheel (note: I'll need to re-weld the brackets later). 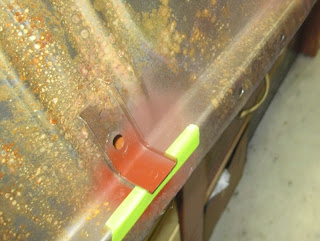 After cleaning up the edge of the new fold with the cutting wheel as before, it was time for a test fit back in the car. If you read the MP article I linked to at the start of this post, then you would be expecting the pan to be ready for welding at this point, but, as you can see from the photo below, it's still a long way off. There are two reasons why. Firstly, the sides of the transmission tunnel are not perpendicular to the floor, so a reduction in the width of the pan is required. Secondly, the floor area below the seat platform is not completely flat at the inner rocker, meaning further adjustment of the pan is needed at the rear outside corner. 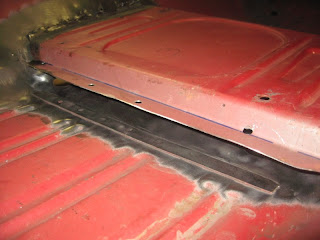 The next picture shows the extent of the difference in height of the floor at the rocker. I employed a trick I got from Stacey Davids Gearz to fit the floor pan and used "cheap, inexpensive, disposable cardboard" to make a template of the exact shape. You could use a profile gauge, which I don't have in my shop, but cardboard has the additional advantage that you can keep it for future reference. 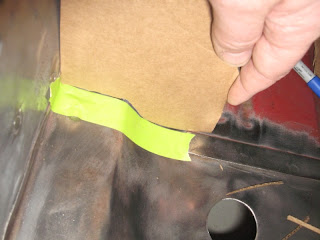 Transfering the exact shape to the sheet metal is a simple matter of tracing round the cardboard with a Sharpie. 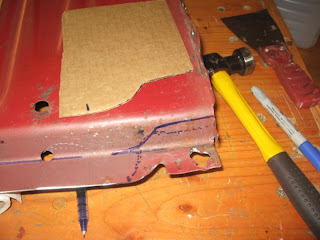 And then the excess metal can be chopped off with the cutting wheel or a pair of metal shears. There are a couple of things to note in the picture below: the first is that you have to plan ahead and leave "tabs" of extra metal to use as welding points when the seat platform is replaced in the car; it's not the end of the world if you forget but it will make the welding more difficult and will probably lead to a weaker structure. The second issue to note is that the new fold at the right side is only about an eighth below the top of the platform - in other words, as I eluded to above, the platform has essentially been lowered as far as is practical (note: MP talk of a two inch reduction in height which would not have been achievable in this case). 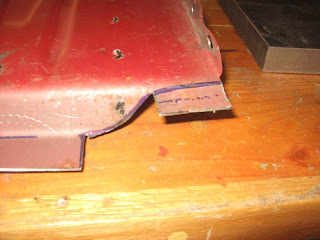 Similar adjustments are also required at the front and rear of the left side where the pan meets the transmission tunnel. 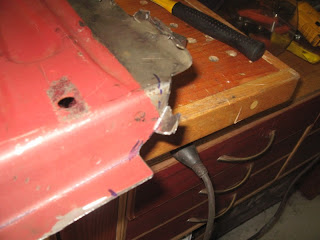 Then I made a third new fold at the left side. This one took a little bit of back and forth to get it right. Once the metal has been folded once, making another fold close by is much more difficult and the piece of scrap angle iron wasn't tough enough to use as a guide. Instead I used a piece of steel plate to support the sheet metal sufficiently to get it to fold exactly where I wanted. 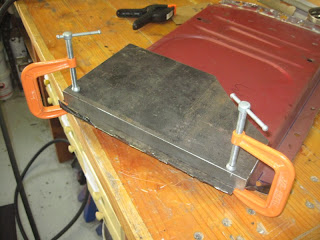 Another try back in the car and the platform is now very close to a satisfactory fit. 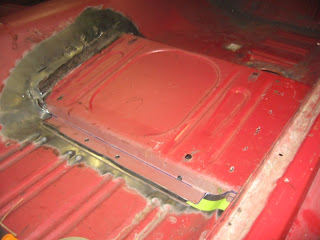 The pan required a little bit of tweaking to make it fit exactly how I wanted it, but a combination of grinding, testing the fit, pounding with the body hammer, testing the fit again, and repeating the cycle led, eventually, to a perfect fit. If I could turn back time and make an improvement, I would have taken the passenger door off the car first, as I opened and closed it a fair few times; having said that, I was really happy with how this came out...now I just need to do the same on the driver side and do the welding. 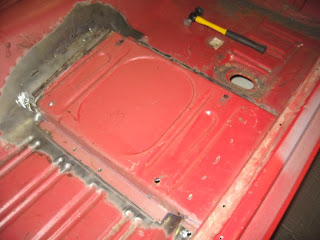