tarting up the trunk part three

So after weeks and weeks of tedious work with the wire wheel and the sandpaper, and then more time cleaning and preping the surface, it's almost time for primer. I understand why a lot of people rush through the masking off to get to the painting, and hence the end result, but I really enjoy this step and I like to take my time with it. Whoever painted my car last time round certainly rushed the masking - virtually everything I removed from the car was covered with red overspray! There are a heck of a lot of small holes to tape over around the trunk, and then there is the "big hole" through to the interior. I started by making a grid of masking tape with the sticky side facing towards the area I'll be painting: 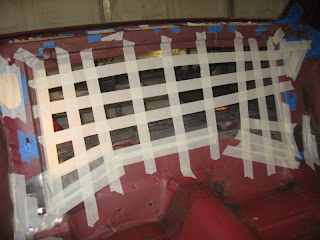 Then I pressed on a piece of masking paper from the other side. I purposely cut the masking paper a little bit smaller than the opening, and then applied more tape around the edges. My motto is "don't be shy" when it comes to using tape; it's cheap and it's much easier to mask something off properly than it is to remove overspray later. 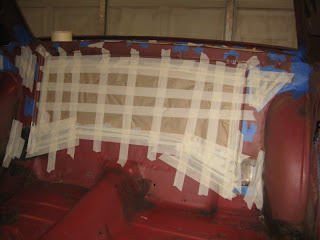 I did the same with the trunk opening, except this time I used some low-tack painters tape over the exterior of the body - I found out a while back that "full fat" masking tape will take off the exterior paint when it's time to peel it off. This isn't a huge problem as I'll obviously be painting the car eventually, but I'm trying to get into good habits. It's probably also the case that if the exterior paint had been properly applied, masking tape wouldn't make any impact...if, if, if... 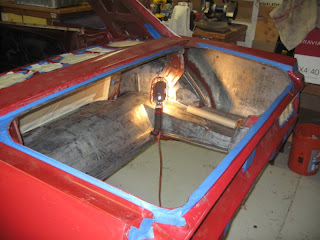 I formed a sort of paper dome over the lock housing. Initially I was hoping to be able to paint this area from inside the trunk, but it didn't work out that way (see below). 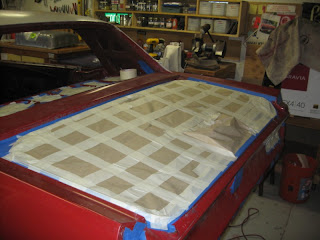 I don't mind a bit of overspray in the garage (and it's just as well!) but I try to keep as much of it as possible off of the rest of my stuff by hanging up some sheets; it's better than nothing. 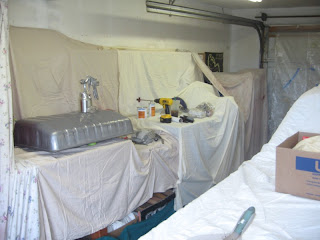 Then it was time to mix up the paint. I used PPG DP74LF red oxide epoxy primer mixed 2:1 with PPG DP401LF activator. Some folks will add reducer but I decided not to use it this time. I acquired a new paint gun since I painted the underside of the car a few months ago. My usual rule is if I need a particular tool once, I'll try and borrow it, but if I need it twice, then I'll buy my own. Obviously I knew I would need to have my own paint gun, but in the course of asking around for advice on what to buy, I got the opportunity to test out a very nice gun. I liked it so much, that I bought the same type, but my own gun is not really up to the calibre of the one I borrowed. It seems to spray more of a single jet than a mist cloud, but that can probably be improved upon by buying a better nozzle - something to look into for next time. Overall I was very happy with the gun I bought - it gave great coverage and for someone of my limited experience it was very easy to use. I also made a lot less mess than the last time, but I think that was more to do with me than the gun! 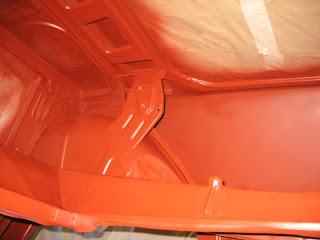 The areas I prevoiusly painted with Zero Rust seemed to come out the same as the rest of the trunk - we'll just have to see how the coating holds up over time. The area below was really hard to paint as I had to hold the gun upside down and contort my arm/hand in order to reach every surface, but I just kept going over and over until it looked the same color everywhere. 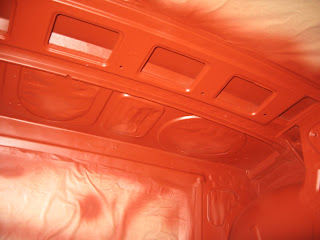 I had to tear off the masking paper to get at the lock housing, so I left this bit until last. 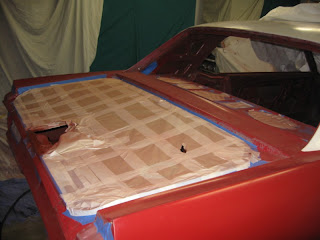 It came out reasonable well; coverage is a little bit light in places, but hopefully no-one will notice (unless they read this blog!) 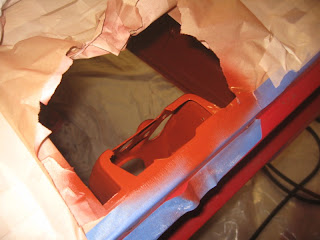 Overall I was very happy with the coverage inside the trunk. 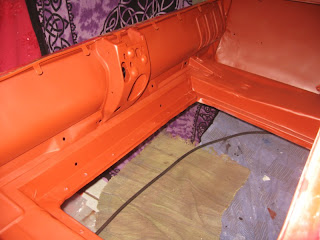 As usual when part of the car has been made all nice, something else starts to look worse than it did...step up the lip around the edge of the trunk opening. In fairness the lip was always awful; I think someone painted the back of the car with the trunk lid closed and didn't bother to mask off the inner lip - it's covered in drips; the lighter color is where the original 1968 paint is showing through. 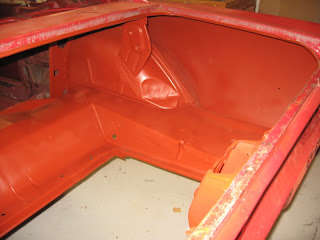 So now the trunk is done...well it's in primer, which counts as done for this stage of the project. Next I'll be moving on to the interior, the inside of the front parts of the quarter panels, the doors, the under dash area, and I'm also going to cut out the seat platforms and lower them. Right now though, I'm having a couple of days break. 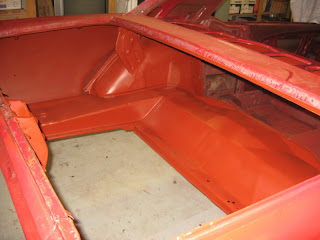