refurbing the rear end...part one

I'd like to say that before I set out on my project of restoring and upgrading the '68 I carefully planned out exactly what it was going to entail in terms of new items and replacement parts.....unfortunately the reality is somewhat different, as at the time I didn't even know the difference between four and five lug wheels. Oh dear. Eventually, after much research and input from the guys in BAMA my shopping list included an improved suspension, bigger rear axle, new front end, 5-lug wheels, better steering, front disc brake conversion, cable clutch and...and..and - well the list is still growing, and from what I see in BAMA, it probably never really ends. Oh, and I didn't even mention the new motor or transmission yet....this could get expensive...!

In my view the best way to approach a project of this size is to branch out and work on several things at once....so, while I've been working on restoring the underside of the car, I've also been hard at work researching rear end specs and shopping for a suitable candidate to refurbish. I got a lot of help from Kevinstang's page, this Mustang Plus shop talk article and woodyg's datalist.

The rear end I settled on came out of a '68 Cougar - it is exactly the same as the rear end installed on the V8 mustangs: it measures 54.25 inches inside the backing plates and the ring gear is eight inch, with a ratio of 3.00 :1. It also came with complete drum brakes which I will be rebuilding later - I'm sticking with drums in the rear of the car and doing the disc conversion upfront. I'm not planning to race the car, so I don't really need a nine inch ring gear, but I do need a lower gear ratio - right now I'm trying to decide between 3.55:1 and 3.80:1, either of which will work with a T5 or TKO transmission. I want the car to have some zip off the line, but I also need to be able to drive on the freeway...another compromise will have to be made here eventually. I also need to upgrade to a limited slip/posi differential at the same time or I'll be laying down stripe instead of stripes! 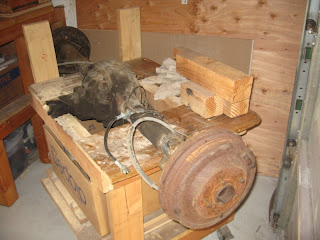 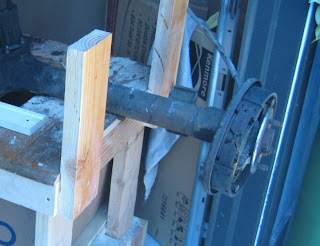 At this point the axles can be slid out....in fact the shorter driver side axle did exactly that: it slid out without a second of fuss. Of course the passenger side was much tougher...oh yeah, it was stuck BIG time. Stuck way too hard for my crappy slide hammer to cope with. I wasn't sure what to try next, but fortunately the internet came to the rescue. A few minutes Googleing (is that a real word yet?) led me to this video clip and the "brake drum method". The crux of the deal is to reattach the brake drum the wrong way round. Use just a couple of lug nuts done up two or three turns each. The drum provides enough force, when it is crashed against the lug nuts, that the axle is easily pulled out. One of those things which may look too easy to be true but really works. The axles were in quite good shape, with just a little rust on the studs and on the flanges. 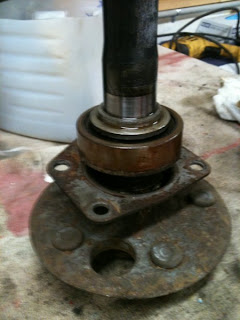 At this stage I took the axles into S+P Auto in San Leandro to get the bearings pressed off. It isn't the closest machine shop to my house by any means, but I happen to know the manager. Generally I put off visits there until I have another reason to be in the neighborhood. I've heard a horror story about machine shops charging 100 dollars for what is really only five minutes work, so I called ahead to ask, and was told 20 bucks each - and this was without mentioning my buddy. The guy I talked to also said he would turn them around straightaway. Even better, when I showed up he said it was 20 dollars to remove and replace the bearing, and as I was only having the removal done at this stage....he'd charge me half price! Sweet. And I still didn't need to mention my friend. So for 20 bucks and a five minute wait time, this was the result: 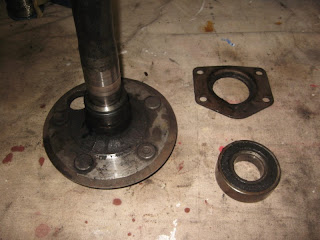 The axle is an awkward object to work on, so I built a jig to hold it from a spare Ikea shelf I had in the garage. I say built...I really just clamped the shelf to the bench and cut a hole with my jigsaw in the portion overhanging the bench: 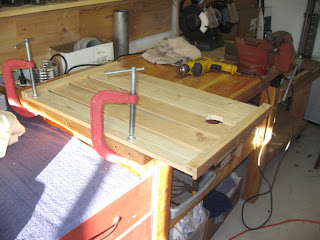 The axle slotted right in and was easy to work on with my wire wheel. Here's the "before" picture: 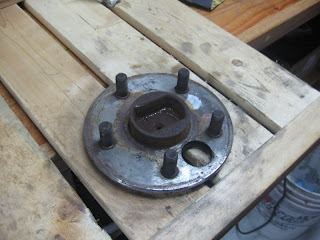 After cleaning with a wire wheel and a fine sanding drum on the Dremel it looked like this: 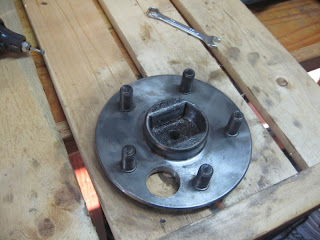 I taped off the the ends of the axle shafts, first with masking tape, and then covered that with a thick layer of duct tape: the idea is to deflect any stray swipes from the wire wheel without getting the shaft covered in the gunge from the duct tape. This worked well and both axles came out good: 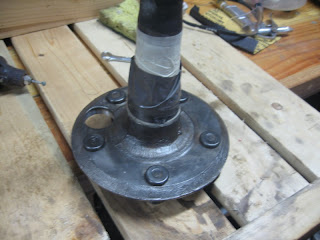 After cleaning, prepping the metal and neutralizing, the axles took on a dull hue. 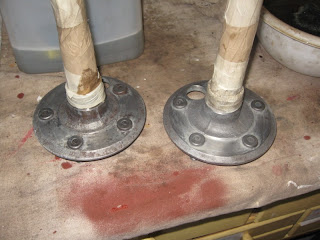 I actually made a miniature booth in my shop to paint the axles and some other parts (more on than later). I also converted the shelf into a drying rack by making two more bores with a holesaw. Then I hit the axles with two thin coats of Eastwood brake gray and left them to cure. Next I'll be working on the backing plates and other parts before I take the axles back to S+P Auto to get their new bearings pressed on. 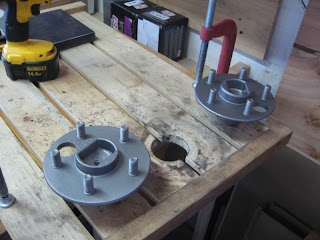