I was supposed to be a pair of fenders and the front wheels away from rolling. The fenders went on quite easily (doesn't everything by the fourth time!), and I didn't waste much time on the alignment. 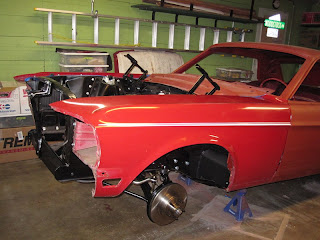 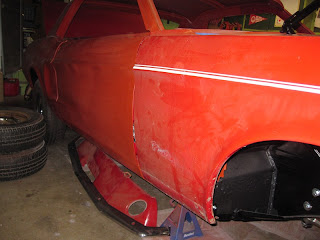 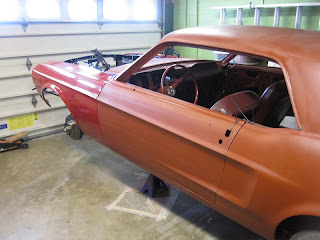 So far, so good. Now the wheels....well this was where I ran into a snag. You see my brakes came from a Granada setup that my friend Terry donated to the cause, and while I used the spindles, the rotors had either worn or been surfaced below the minimum thickness...so I had to throw them away...which is exactly what I did, soon after I acquired them.


Now....fast forward a few months, and it's time to move the car...and no rotors. Fortunately it wasn't a big deal to get a pair of replacements. At least it wasn't a big deal after I paid a visit to my buddy Mark at the Vic Hubbard Speed Shop. As well as the rotors, Mark sorted me out with all the bearings and seals, and for a great price too. So all good....well, not so fast. What I didn't realize, when I ordered the "Granada rotors", or even while I was installing them, was that the hub on these discs is larger than on the Mustang rotors...which means, in layman's terms...that the wheels won't fit on. Oh $hit....school boy error :( This would be bad enough anytime, but on the day before I needed to move the car I could have got by without it. 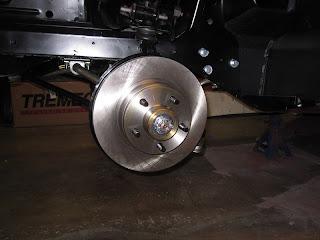 These are the roller wheels I have on at the back of the car - part of a set of four that I stole from my friend Terry's backyard while he was at work. They used to have the limited edition center caps until our friend James took them off and sold them! One day they will be replaced with some Magnum 500's and a set of classic BF Goodrich treads. 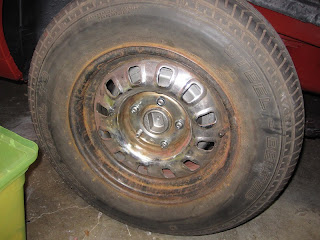 But.....nothing I could do was going to make these wheels fit on over the rotors I just installed, so I made yet another frantic SOS call to my good friend Chuck...and after a quick wave of the BAMA magic wand, we managed to borrow some appropriate wheels from one of the guys at Mostly Mustangs in Oakland. These wheels actually came off a Jeep. It's not quite the look I'm going for, but seriously, I don't know where I'd be without my car-guy friends....probably still trying to change my oil pan gasket. 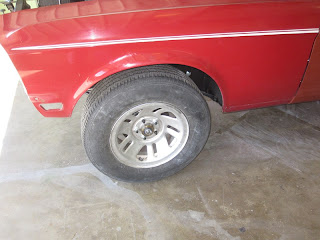 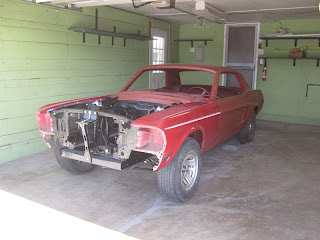 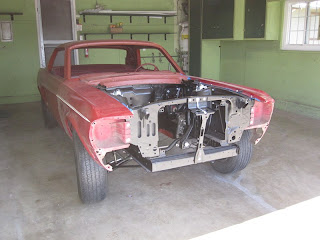 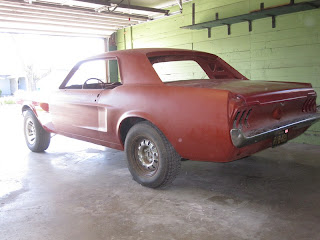 Leaving, as it arrived, on the back of a flat bed: 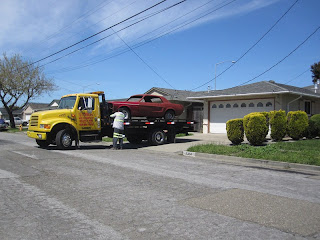 Settling into the new home: 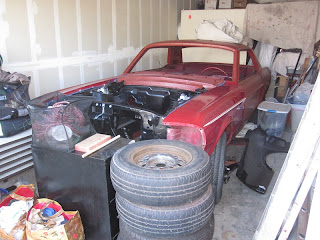 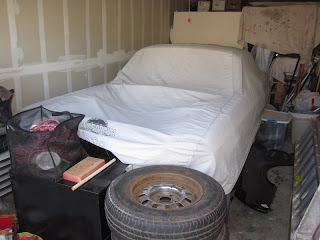