Once I was happy with the magic rust removal solution (ie exactly one day after I started using it!) I spent a while collecting together every small part that could possibly benefit from treatment....and then systematically soaked everything in batches. While this was going on I also stripped the old paint off of some of the other small parts that I was planning to refinish. It wasn't long before I had a growing pile of pristine, original parts. 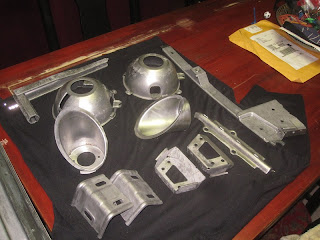 I converted my garden shed into a spray booth so that I could get the nice shinny parts painted as quickly as possible. Anything that originally had the appearance of bare metal got painted with my favorite Eastwood Brake Gray over a light coat of etching primer.

I decided it would be most time efficient to refurbish a few parts that I'm not even 100% sure I'll be reusing (like the fuel line attaching bracket, below) while I had my Production Facilities/Paint Booth fully operational, rather than coming back to this stuff later on. 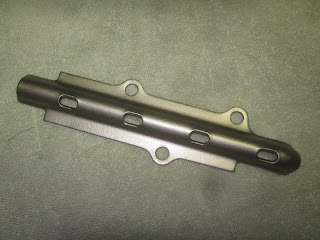 By this time I was accumulating another large pile of empty rattle cans in the shed. 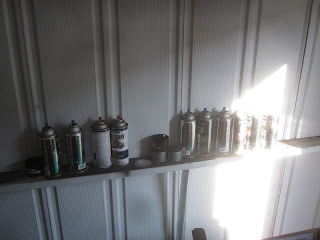 The black parts got hit with at least two coats of the same Duplicolor paint I used on the engine compartment.

I painted the tail light buckets with some chrome-look paint on the outside, and then I used some duplicolor brilliant white on the inside - this took a lot of masking and re-masking to achieve, but the white is much better for reflecting light than chrome or gray would be. At this point I have finished pretty much all of the small parts that will have a paint finish - so in other words the garage is still stacked full of boxes of parts, but now more than half of them are ready to go back :) 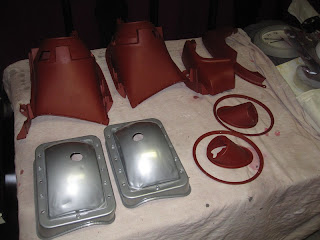 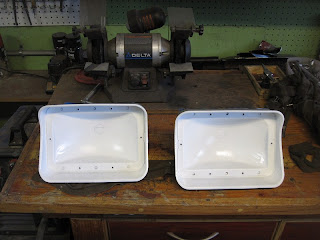