motor and tranny out

The restoration of my car has always been a multifaceted project, especially over the last few weeks where I have been simultaneously working on refurbishing the doors, cleaning up the passenger compartment, and tinkering with a turn signal hood I recently acquired. So to me, if not to everyone else, it makes perfect sense that before any of these mini projects were completed I would pause to pull out the engine.

I've never pulled out a motor before - in fact this entire project has been a succession of "firsts" - so I was reluctant to do it on my own. I'm a huge believer in the adage 'where's there's a will there's a way', and there is not much I won't tackle, but hauling out a motor...well that's a step too far. Fortunately I was able to call on my buddy Chuck from BAMA for some help, and his son Phil for the loan of an engine hoist. (Note: this is exactly why people join car clubs, and while I get a ton of other things out of being in BAMA, help with my car is only ever a phone call away).

Most of the reason why I slaved to turn the car round last week was so that I could pull the engine more easily. The plan was to take the motor and transmission out in one piece, so I had to take the hood off the car - it would have had to come off soon anyway, so no big deal. I also drained the oil and knocked out one of the freeze plugs so I could get most of the water out before we started. 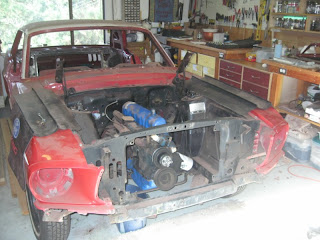 The ceiling in my garage is incredibly low, so we actually moved the front of the car out onto the drive before setting up the hoist - this is where it helps to have an experienced guy around - I would never have thought about this issue on my own. The chains were attached to the engine by bolting individual links to the block, and then I crawled under the car and removed the transmission crossmember...and it was time to go!

Email ThisBlogThis!Share to TwitterShare to FacebookShare to Pinterest
Labels: 302, engine